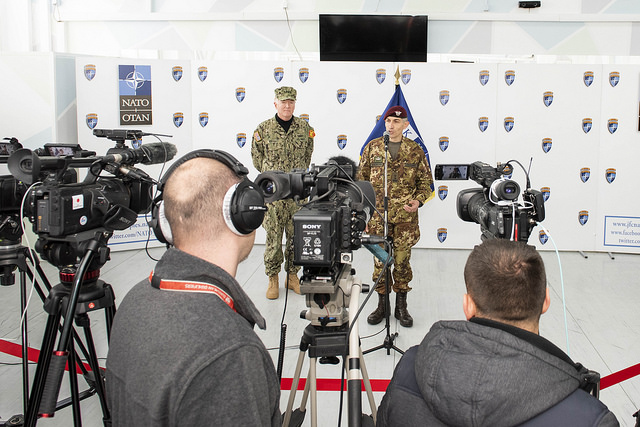 PRISTINA – Twenty years anniversary since KFOR mission entered Kosovo is marked on Wednesday in Camp Film City. In this occasion, it is said that the mission will continue to be guarantee of security and freedom of movement for all communities, RTK2 reports.

D’Addario said that KFOR contributed to security and freedom of movement in Kosovo and will continue to do so in the future.

“As a result of all this, Kosovo is today completely different from what it was 20 years ago. That progress had its price. During those years, more than 200 KFOR soldiers lost their lives. We are ready to continue to serve citizens, in an impartial way, and to remain on the road of the huge progress we have achieved,” said D’Addario.

The Commander of the United NATO Forces in Naples, Admiral James Fogo, said that during the 20 years in combat and non-combat activities, life lost 213 soldiers and that their sacrifice represented “the most important contribution to one of the greatest NATO achievements ever since the Cold War.”

“It was the help of restoring the peace and security throughout the Balkans, at a time when the returning back to the conflicts seemed inevitable”, said Foggo, adding that they are committed to European security and promotion of peace in Europe, writes RTK2.

After the commemoration, Foggo and D’Addario held a joint press conference. Responding to questions, they pointed out that reduction of the mission’s personnel is not planned and as for Kosovo’s NATO membership they said that it was a political matter.

Foggo praised the cooperation with the Serbian Armed Forces and stressed out NATO’s commitment to fulfilling its obligations from the Resolution 1244, which therefore requires cross-border cooperation with Serbia.

“About a month ago, I talked about the security situation in the Balkans with General (Milan) Mojsilović, who is the new Chief of General Staff of the Serbian Armed Forces. We will continue to cooperate with everyone,” concluded Foggo, reports RTK2.