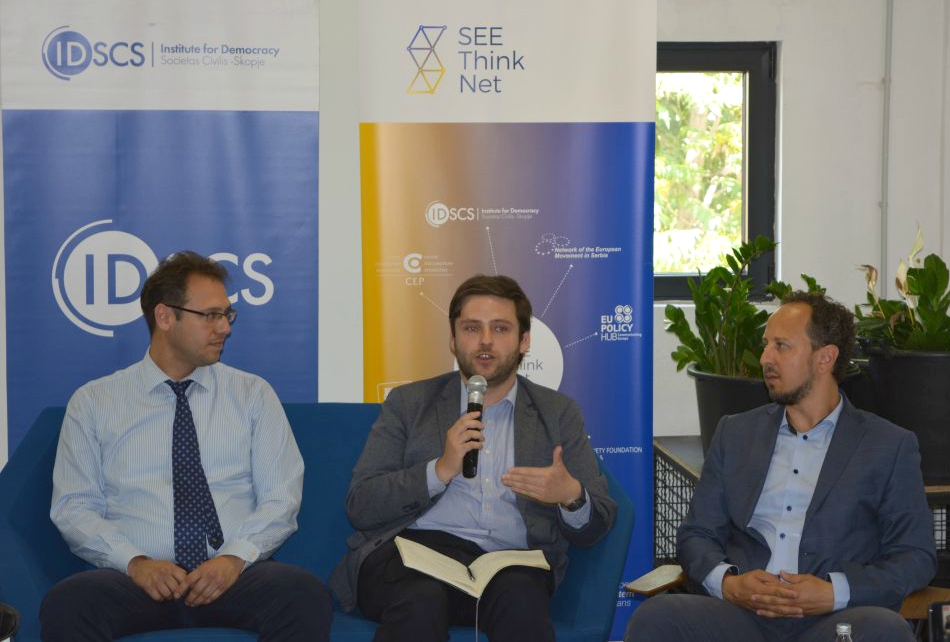 The publication “Resolution of the bilateral disputes in the Western Balkans: Role of the European Union and Berlin Process”

SKOPJE / PRISTINA – Institute for Democracy “Societas Civilis” – Skopje (IDSCS) within the framework of the regional network of civil organisations and experts for monitoring the Berlin process – SEE Think Net organised a promotion of the policy paper “Solving bilateral issues in the Western Balkans: The role of the European Union and the Berlin Process“, on Thursday, June 13 in Skopje and Pristina.

The publication co-authored by researchers Zoran Nechev, Head of the Center for European Integration at IDSCS and a member of the Balkans in Europe Policy Advisory Group (BiEPAG) and Adnan Ćerimagić, an analyst at the European Stability Initiative, was developed within the project “Towards sustainable regional cooperation: Berlin process and beyond” supported by the European Fund for the Balkans (EFB).

The publication analyses the bilateral disputes in the Western Balkans with an emphasis on Belgrade – Pristina relations.

In his welcoming remarks Marko Troshanovski, President of IDSCS, said that one of the questions analysed in the publication is how European policies influence the stabilisation of the region which is the primary interest of European countries when it comes to the Western Balkans.

Ćerimagić noted that the European Union can bring back the impact in the Western Balkan countries with opening accession negotiation with North Macedonia in the next couple of months.

Nechev underlined that if the EU does not recognise the result of the Prespa agreement and all the efforts done especially on bilateral issues by the Greek and Macedonian government, it will have a negative effect on the European integration process itself and on the credibility in the region.

According to Ljupco Petkovski, Executive Director of Eurothink, if North Macedonia does not get a date for the start of negotiations with the EU, bad signals will be sent because the Prespa Agreement was built upon promises for joining the EU. He believes that such a situation will increase disappointments and scepticism among people.

The event in Pristina was opened by Mentor Vrajolli, Executive director of the Kosovar Centre for Security Studies. Florian Qehaja, Chair of the KCSS board, participated in the discussion.

Ćerimagić presented the publication, while Nechev presented the SEE Think Net network and referred to the Prespa agreement and the dynamics of the negotiation process. The debate was moderated by Donika Emini, a researcher at the KCSS and a member of BiEPAG.

This publication will be promoted in Podgorica on June 24 in the organisation of IDSCS and Politikon Network.

The goal of the SEE Think Net Network is to produce significant policy inputs and provide policy recommendations on topics that derive from the Berlin Process. As such, its activities are devised in order to closely monitor the Berlin Process and the policy areas the process encompasses.

The Network was established in mid-march 2018 with the support of the European Fund for the Balkans as the first regional network composed of civil society organisations that aim to monitor the topics related to the Berlin Process.