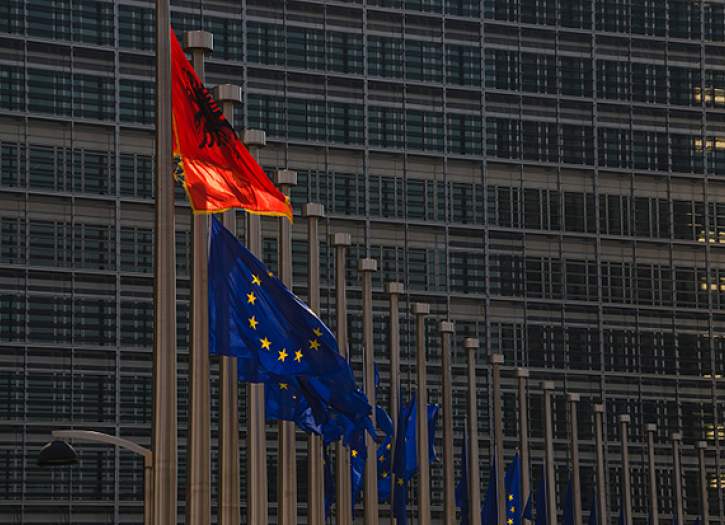 The reintroduction of visas for Albanian citizens, this is how the Dutch parliament sees the solution of organised crime stemming from the country. However, even if the European Commission’s evaluation results in an initiative to suspend visa-free regime for this Western Balkan country, EU member states will face the dilemma whether this solution successfully stops criminals from entering the EU or just isolates ordinary Albanian citizens from the rest of Europe.

Offences committed by Albanian natives that have caught both professional and public attention in recent years range from running cocaine business to illegally boarding trucks heading from the Netherlands to the UK. The issue ultimately ended up in front of Dutch MPs, who voted to send an official notification to the European Commission in April, asking it to trigger evaluation of Albania’s visa-free regime – the procedure that started two weeks ago.

Those against the move were eager to point out that the return of visas is not going to discourage those already determined to break the law, says Wouter Zweers, researcher at the Netherlands Institute of International Relations ‘Clingendael’, for our portal.

“There is an understanding that professional criminals are not stopped from crossing European borders by reintroducing visa requirements”, he says, adding that this was an argument made by a MP from D66, a progressive liberal party and the only coalition party not supporting the motion.

On the other hand, the backers of the motion to discontinue the visa regime believe that it will give the Dutch police an effective tool to counter the issue of Albanian citizens overstaying the three-month limit of visa-free travel.

Suspension of visa liberalisation for a country outside the EU has never been implemented before. However, the Netherlands certainly believes that the reported illegal acts warrant emergency measures, mostly because of the media attention cases with Albanian gangs got.

“Over the last years issues with Albanian nationals have received much public attention in the Netherlands. Albanian nationals play a significant role in organized crime in cities such as Amsterdam and Rotterdam and other regions in the country”, wrote The Hague’s representative in Brussels Robert de Groot in his letter to the Commission.

The most important question for the citizens of Albania, thus, is whether the conclusions of the Commission’s evaluation will align themselves to those of the Netherlands. Fact-checking will be the first step and, according to Wouter Zweers, the findings presented in de Groot’s letter indeed reflect the reality.

“In 2019, a number of cases involving Albanian criminal groups received public attention, which may have served as a motivation for MPs to take action. An article of Dutch newspaper de Telegraaf from March 2019, for example, noted that Albanian gangs rule the Amsterdam cocaine business”, states Zweers.

Furthermore, most recently, a coordinated policy action in the south of the Netherlands targeted three Albanese gangs involved in the production and trafficking of soft drugs.

According to the Netherlands’s notification to the Commission, despite the fact that the number of registered Albanian suspects fell from 710 in 2016 to 476 in 2018, their numbers in organised criminal groups are on the rise, and what is particularly worrying is the quality of their activities – they have become more “professional”.

“This is the main reason why the Amsterdam police corps and public prosecutor already in 2017 called for the reintroduction of visa requirements for Albanians in order to better control the quick rise of organised crime by Albanians in the city”, Zweers reminds.

The threat from the organised crime is not the only argument for the suspension of visas. In its notification to the Commission, the Netherlands lays out the numbers of Albanian nationals found to be illegally present in the country, which rose from 395 in 2017 to 945 in 2018. Irregular migrants climbing into Dutch trucks on their way to the UK, via the port of Rotterdam, are highlighted as a particular challenge.

On the other hand, compared to the UK that does not grant visa-free travel to Albanian citizens, the Netherlands faces fewer problems with Albanian criminality.

The Commission’s evaluation may as well result in damaging findings. Nevertheless, this brings us back the question of effectiveness of visas. Will they really be the decisive solution? Or will they just present an additional burden to law-abiding citizens?

According to Zweers, many of those supporting the initiative noted that it is not only about effectivity. They view it more as a “signal” to Albania – a call to increase its efforts in fighting organised crime.

Some would argue that Albania has already received appropriate signals as of late – the Commission’s Annual Report identified multiple challenges remaining in this area. And the yesterday’s postponement of the decision to open accession negotiations until October, coupled with another decision of the Dutch parliament, this time not to support the start of Albania’s negotiations at all at the moment, will be interpreted as yet another such signal. The Commission and the member states seem to be facing the decision not to slow down, but reverse Albania’s path towards EU membership.

“Decisions to suspend visa-free travel cannot be taken lightly, and any steps leading towards triggering the mechanism would be subject to very careful assessment and analysis”, stated EC Coordinating Spokesperson Natasha Bertaud. Citizens of Albania will certainly hope that all possible outcomes of the potentially unprecedented decision will be taken into account.

The ball is now in the Commission’s court and, according to Spokesperson Bertaud, the decision to implement the suspension of visas will be made within a month – that is, by the end of June.

“The Commission will now carefully assess the notification in line with the procedure and based on relevant data and relevant information regarding the specific circumstances“ she stated on June 3.

Albanian citizens have been traveling to EU countries without visas since December 2010. Now, after it received a letter from Netherland’s representative in Brussels, the Commission might, for the first time ever, decide to suspend visa liberalization of a country outside the Union. According to the EU rules, Commission, supported by a qualified majority of EU member states, can decide to suspend Albania’s current exemption from the visa requirement for nine months, if there are justifiable circumstances. This can then be followed by additional 18 months, and, as a last resort, permanent reintroduction of visas.

Marinelli: Disinformation campaigns are one of the main challenges for the Alliance