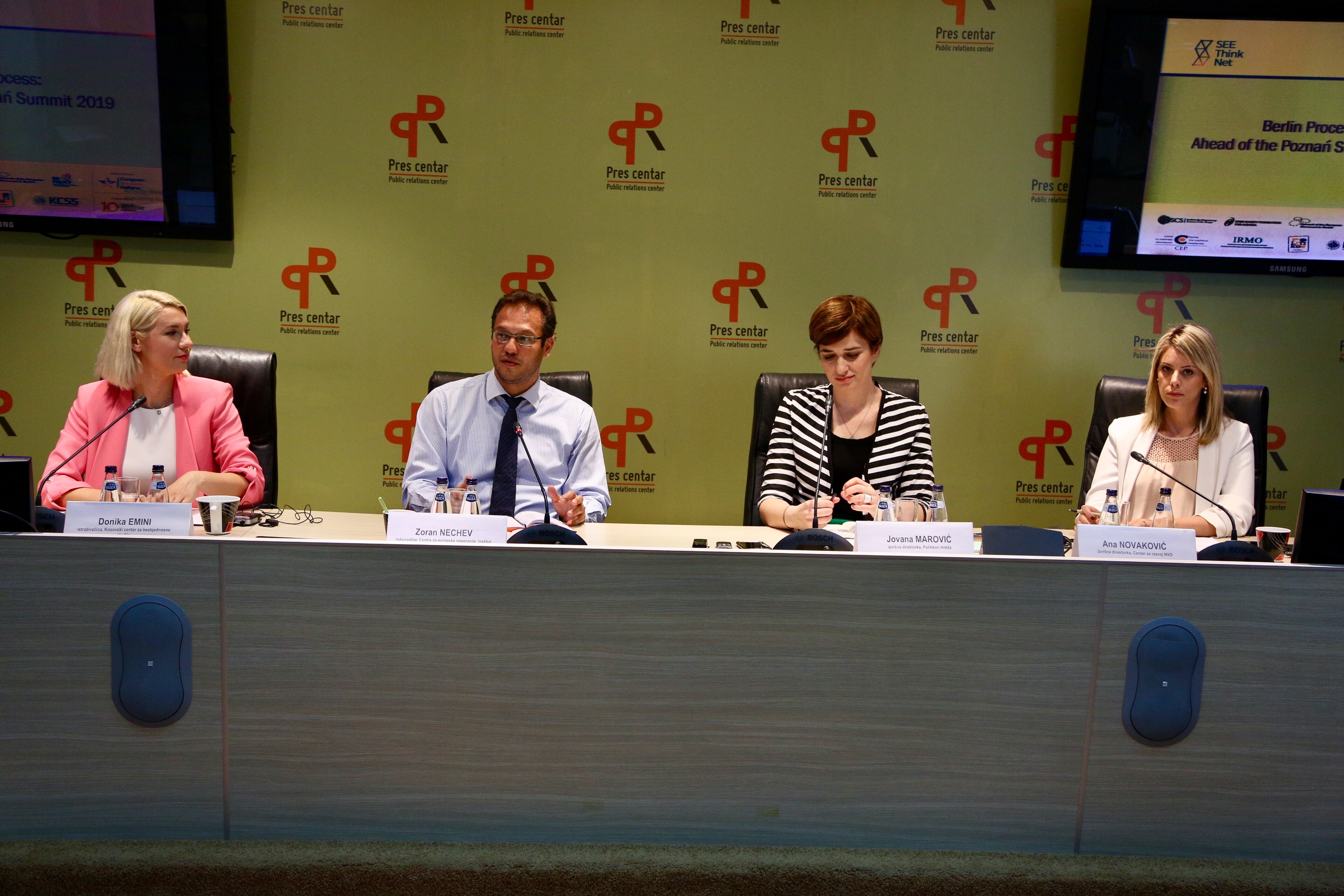 PODGORICA – The rule of law has to be one of the main goals of the Berlin Process and it is necessary to bring the reforms closer to citizens in a less complicated way and improve regional cooperation – this was the conclusion of the panel discussion “The Berlin Process: Ahead of the Poznań Summit” organised by the Politikon Network and the Institute for Democracy “Societas Civilis” from Skopje (IDSCS).

Executive Director of the Politikon Network and a member of Balkans in Europe Policy Advisory Group (BiEPAG), Jovana Marović, believes that the rule of law should be on the agenda of the Berlin Process, as it is a key reform process.

“There is no favourable business climate without equal access to justice and if the law is not the same for everyone,” Marović said at the PR Centre in Podgorica.

As she explained, it is important that the rule of law is on the Berlin Process agenda, because it is a special framework, which includes the countries of the Western Balkans, the European Union (EU), the European Commission, as well as civil society, the business sector and youth.

“What we have achieved so far in the process of European integration is insufficient to strengthen the rule of law. Also, regional cooperation and economic reforms, which are emphasised in the Berlin Process, have not contributed to the strengthening of the rule of law so far,” said Marović.

According to her, state institutions should make additional efforts to bring laws and regulations closer to the citizens.

“In Montenegro, we currently have a situation in which we cannot count on the law to be above practice in the near future. I am specifically referring on the election of the Council of the Agency for the Prevention of Corruption and the election of the President of the Constitutional Court,” said Marović.

She thinks it is necessary to bring reforms closer to citizens.

“The next message is that it is necessary to improve transparency and improve cooperation with the civil sector, the media,” said Marović.

This would, according to her, improve regional cooperation.

“The fact that the dispute between North Macedonia and Greece is resolved is a strong motivation, but we still do not see what effect it has on resolving other bilateral disputes, and this is something that significantly slows down the process of integration of the Western Balkans,” Marović explained.

The message for the EU, as she said, should be that it needs to the develop a special approach for each Western Balkan country.

“I think that at this moment we should do what helped resolve the crisis in North Macedonia – an ad hoc mission report, which made binding recommendations and was extremely concrete. This is something that should be applied on the political crisis in Montenegro to the political crisis and the conditions for elections,” Marović said.

She also said that the EU should provide a credible membership perspective to the Western Balkan countries.

Donika Emini, Researcher at the Kosovar Centre for Security Studies and Member of BiEPAG, reckoned that the heritage of Yugoslavia is the main challenge for establishing cooperation in the Western Balkans.

“Some countries, Kosovo or Albania, hold resistance towards participating in regional cooperation mechanism. Other great challenges are the language, tradition and culture,” said Emini.

Even though numerous platforms for regional cooperation had been established in theory, she highlighted, the cooperation does not exist in practice.

“My question is – what would happen if there was no EU? What I am trying to say is that even this level of cooperation established so far is under the influence of external factors. Would we still be cooperating if it was no dream of EU as the key motivator– would we then realise that cooperation is in the interest of all our citizens? Would we then be aware of the fact that neither an isolated Kosovo, nor Montenegro, nor North Macedonia could not confront greater forces, asked Emini.

She rested assured that it is pressing for the EU to continue contributing to the initiatives of regional cooperation, with it being only mechanism that “holds the Balkans in place, in its entirety”.

“The second initiative should go in the direction of making the Balkan countries conscious of the mutual benefits offered by cooperation. The EU should prepare the Balkans in order for these countries to be capable of tackling security challenges both within and outside their national borders. The Western Balkan countries can collaborate with the EU in peacekeeping missions,” indicated Emini.

The Executive Director of the Centre for Development of Non-Governmental Organizations (CRNVO), Ana Novaković, considers that the Berlin Process has not met the expectations held by everyone  upon its initiation in 2014.

“As far as the reconciliation politics goes, the regional initiative RECOM obtained declaratory support. However, nothing farther away has been done and from that perspective, we cannot be talking about extraordinary results. Secondly, it is the communication of this process which had not been carefully thought of from the beginning. I believe everything will come down to inner-circle debates,” argued Novaković.

She highlighted that citizens barely know anything about the Berlin Process.

“Of course, the ones that are aware of it are country representatives and a limited number of NGOs who are participating and following this process. If it is complementary to the enlargement process, I think it should be presented to the citizens from a completely different angle,” said Novaković.

She considers this as a key moment to redefine the goals of the Berlin Process and that the rule of law should be established as a definitive goal of the process.

“We can talk about a certain degree of progress in all fields within the Western Balkan countries – however, the common defect of these states lies in the sphere of the rule of law”, she said

The rule of law should be indicated through clear results, assessed Novaković.

“The Berlin process requires redefining our goals and, in my opinion, the list should be headed by the rule of law. Only in that case can we talk about a complementary enlargement process. Under opposite conditions, I imagine that this process can only seem even more artificial from the citizens’ perspective”, contended Novaković.

The coordinator of the Centre for European Integrations at the Institute for Democracy “Societas Civilis,” Zoran Nechev, argued that the Southeast-European network had been established last year.

“The network is comprised of six organisations and representatives of six countries present in this area, whereas we also included two partners from Croatia and Slovenia. North Macedonia, Serbia, Albania, Bosnia and Herzegovina, Montenegro and Kosovo are also attending,” said Nechev.

He highlighted that one publication which forms part of the project tackles bilateral questions and encompasses two collisions – the Macedonian question and the dialogue between Priština and Belgrade.

“We are thoroughly tackling the dialogue between Pristina and Belgrade and we attempted comparing this dialogue with the crisis in Macedonia, wishing to see if there were any parallels to be underlined in order to learn from its history and intend helping these countries to achieve viable results,” said Nechev.

The panel discussion was organised as part of the project “Towards sustainable regional cooperation” supported by the European Fund for the Balkans (EFB), implemented by IDCS and the “SEE Think Net” network.

EU Scheme for Young Professionals in the WB: Call for Applications