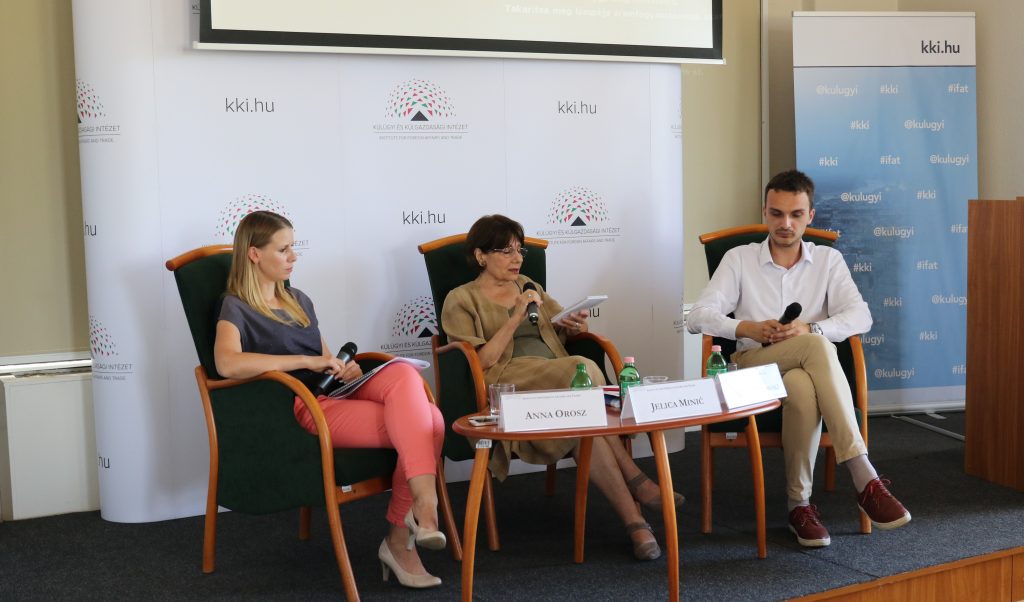 Presentation of the policy papers on the cooperation between the Visegrad Group and the Western Balkans; Photo: Institute for Democracy “Societas Civilis”

BUDAPEST – Institute for Democracy “Societas Civilis”, on June 28, participated at the promotional event of the project entitled ‘Regional cooperation in the Western Balkans: The Berlin Process and Visegrad Group in comparison’ hosted by The Institute for Foreign Affairs and Trade.

The project is implemented by a consortium of think tanks from the V4 and WB6, among others the SEE Think Net Network, the Institute for Democracy “Societas Civilis”, the Network of the European Movement in Serbia and IFAT and is financially supported by the International Visegrad Fund.

The promotional event aimed to introduce two policy papers that have been published as part of the project – Visegrad Group’s cooperation with Western Balkans: Achievements and the way forward and Connecting dots in the Western Balkans.

Before the presentations, Márton Ugrósdy, Director of the Institute for Foreign Affairs and Trade and Ivan Nikolovski, Junior Researcher of the Centre for European Integration at the Institute for Democracy “Societas Civilis” – Skopje welcomed the audience and pointed out the importance of the project that supports strengthened cooperation between the Visegrad Group and the Western Balkan countries that will increasingly need the political encouragement and technical assistance of the Visegrad Group for their EU integration path.

After the welcome notes István Balogh, the Deputy State Secretary for Security Policy of the Hungarian Ministry of Foreign Affairs and Trade held his introductory speech in which he expressed his disappointment regarding the decision of the General Affairs Council of the EU to postpone the start of accession negotiations with North Macedonia and Albania.

He warned that the EU was risking losing social and political support in the region, if there was no positive message from its side. He also reminded that there was a mutual political and economic interest to integrate the Western Balkan countries into the European Union. From the Hungarian perspective the region is a natural priority area which has many potentials.

The Hungarian Government has realized those unused potentials in economic and trade relations and started to build upon those even more intensively – he added. He welcomed all initiatives including the Berlin Process that encourage reforms and development in the region but reminded that none of these should substitute the accession process.

The first paper on the cooperation between the Western Balkans and Visegrad Group was presented by Anna Orosz, Research fellow of IFAT.

The paper points out that supporting Western Balkans Euro-Atlantic integration became a priority for the V4 cooperation after those countries joined the EU. It introduces four dimensions of the cooperation: political, inspirational (know-how sharing), sectoral dimensions and the cooperation among civil society actors and administration.

The authors also formulate recommendations how to strengthen the cooperation further, including an increased institutional and sectoral cooperation, revitalization of some former initiatives that have not been utilized so far, and strengthened support and lobby for the region’s European integration within the EU institutions.

Jelica Minić, the Vice President, European Movement in Serbia presented her paper on the connectivity agenda that is a core area of regional cooperation within the Western Balkans supported by the Berlin Process. The Connectivity Agenda and the Multi-Annual Action Plan for Regional Economic Area are two interconnected initiatives that help the region to get prepared to join the European single market through regional integration in the field of transport, energy, trade, investment, labour market, etc.

Beyond presenting achievements like Roaming Agreement, she also pointed out key challenges stemming from political conflicts in the region and the contested authority and rule of regional organizations. In her conclusions she warned that bilateral disputes can poison and undermine these regional structures and endanger their sustainability. She emphasized the responsibility of all actors involved in the implementation and pointed out that civil society actors can play an important role too.