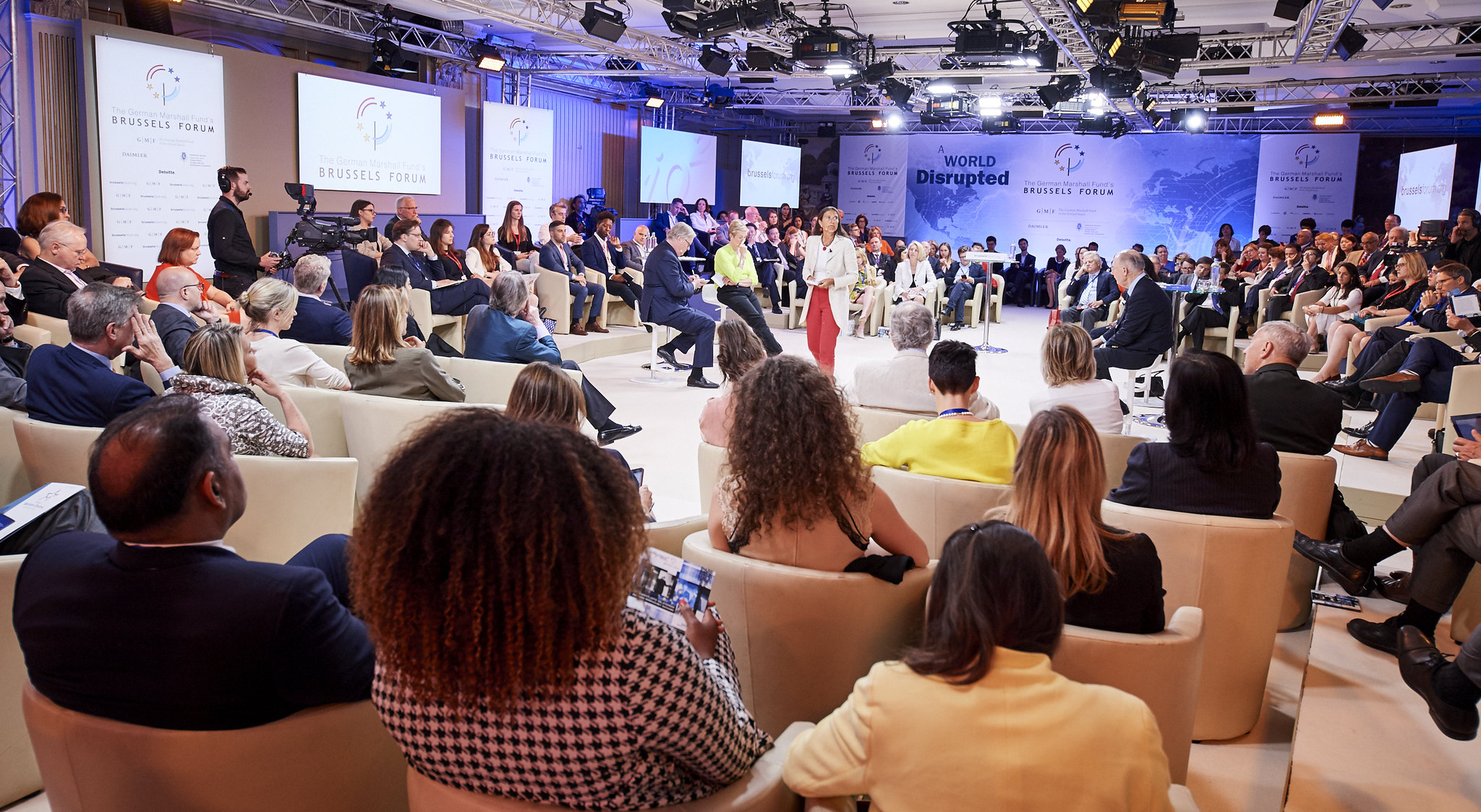 BRUSSEL – The world is becoming less stable and predictable, democracy is under pressure and illiberalism is growing – those are some of the conclusions of the Brussels Forum – A World Disrupted.

This three-day high-level conference gathered many political, corporate, and intellectual leaders to address pressing challenges currently facing both sides of the Atlantic.

In its 14th year, Brussels Forum conversations centered around global disruptions: the rising competition with authoritarian powers such as China and Russia, the urgency of a coherent climate change strategy, the increasing polarization of US and European politics, and the unprecedented effects on society and security posed by the proliferation of technology.

Federica Mogherini, High Representative of the European Union for Foreign and Security Policy and the Vice President of the European Commission explained that she “would not change one single comma of the Lisbon treaty” when it comes to her job.

When it comes to cooperation with NATO, she says that budgets of the EU member states have gone up, which did not happen for years and that the soft power is more important to the EU than military power.

“Our strong power is soft power. We know that well, we are going to continue to use it,” said Mogherini.

Looking back on her mandate, she said she wishes for the consistency of member states. “Not unanimity, we never had a problem in adopting a decision unanimously in the Council. But what we would really need is ownership. Is the sense of a decision making at the European level as it is decided by the member states.”

Back with a Vengeance: A New Era of Geopolitical Competition

General John Allen, President of the Brookings Institution said that democracy is under pressure that has not been seen in a very long time, adding that there is a growth of illiberalism in many places in the world, not only in Europe.

Minister of Foreign Affairs of Poland, Jacek Czaputowicz, agreed with this assessment stating that they used to think that liberalism and democracy is a better system, and this system would win in competition with the authoritarian systems. However, he said that the question remains – is democracy still better equipped in order to fight these authoritarian regimes.

On the fact is that the world has changed and keeps on changing, pointed Miroslav Lajčak, Minister of Foreign Affairs of Slovakia. He noted that the world is becoming “less stable, less predictable, less manageable, and less secure.”

Gordana Delić, Director of the Balkan Trust for Democracy of the German Marshall Fund of the United States explained that the GMF has been building transatlantic bridges between Europe and the United States through support to the civil society, not only financially, but we do much more.

“We are deeply invested in leadership development. We build networks. We build platforms for the exchange of ideas,” said Delić.

That democracy and civil society are intertwined, said Brock Bierman, Assistant Administrator for Europe and Eurasia of the USAID.

He also noted that civil society has an important responsibility to bring every democracy, every country that embraces democracy, together.

Katarina Mathernova, Deputy Director-General of DG NEAR said that to build resilience and to have political dialogue, they really rely on civil society, both as a service provider but also the one that brings experience, expertise, from a different angle. “Attack on media, not only in our part of the world but elsewhere, with the disinformation, with hybrid warfare going on, we think that supporting civil society is really key to building societal resilience.”

European Elections – What do they tell us about Europe?

On how to decode the European elections, what they mean, how to understand what they might be saying about European society and politics, discussed Rosa Balfour, Senior Fellow of the German Marshall Fund of the United States and Ivan Krastev, Chairman of the Center for Liberal Strategies.

“The election results were not as catastrophic as many had predicted. The far-right which includes anti-EU parties did not do as well as expected, but at the same time, the pro-European majority is more fluid,” said Balfour, adding that entering a period of fluid politics in Europe has many positive aspects.

Ivan Krastev explained that what was interesting about these elections, were apocalyptic expectations. “We know who has not won, and this is the populist right. Secondly, what is important for these elections is, this was elections on which none of the major parties, even on the far-right, was asking for exit,” he said adding that none of the major parties was advocating for open borders.

“The populist right is not as strong as many people believed, but on the other side, none of the major choices that we are going to face, we are very much prepared for them. From this point of view, there are still not many reasons to be celebrating there,” said Krastev.

Balfour pointed out ton several challenges the EU is facing, such as the decline of liberal democracy in certain member states.

[EWB Interview] Potočnik: Enlargement policy is one of the most successful EU policies