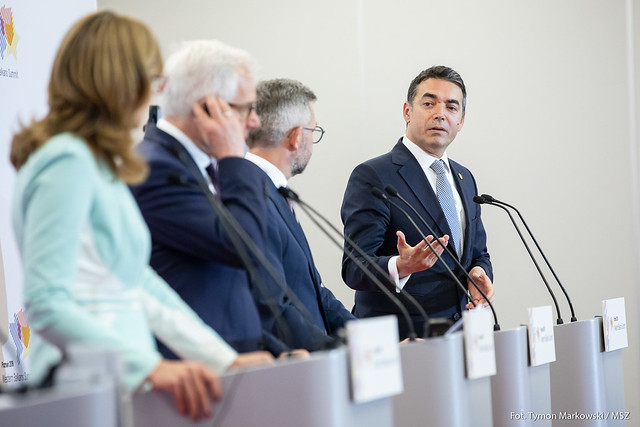 Since North Macedonia is praised for achieving a historic success with solving the name dispute it had with Greece and is said it should serve as an example of the good neighbourly relations, this comes up as no surprise.

“Holding a bilateral presidency over the Berlin Process is very important to the process itself and particularly vital to the proximity between these nations within the Western Balkans, and it provides the green light and motivation to expand the collaboration on to other platforms,” stated Dimitrov.

He emphasised that the focus of the next year’s presidency will be placed on achieving satisfactory results, pointing out that North Macedonia will base their work on the experience Poland had this year.

“We will remain in consultation with the Berlin too, and above all, we will be working with civil society and NGOs with whom we had constructive sessions already,” said MFA of North Macedonia.

When speaking about enlargement, Dimitrov said that completion of Europe and filling the gap is necessary, for the Western Balkans, but also for the EU.

“The Berlin Process began with the agenda to create a road connection and it was extended on the economic matters and created an economic area. And these two infrastructure and economic aspects were the cornerstones for our further steps for the accession of these countries and the region in the European Union,” explained Dimitrov.

Zaharieva said that this is one of the fundamental goals of the Berlin Process, but it is also about connectivity and ties between the people, business, entrepreneurs and scholars, and how can they enable the region to overcome problems amassed in the past.

“I think that our joint presidency with North Macedonia colleagues will empower Western Balkans states to resolve their own problems,” said the Minister of Foreign Affairs of Bulgaria.

She explained that five years ago it was completely impossible for these two countries to fathom that their relations will be developed this intensely.

“We signed the Treaty on Friendship, Cooperation and Good Neighbourly Relations between Bulgaria and North Macedonia. The deal that was negotiated for several years was finished within the month,” said Zaharieva.

Speaking about the opening of the accession negotiations with Albania and North Macedonia, she said that in the following two years they have received positive assessments and evaluations.

“As long as we stress the points of view of Western Balkans friends, we have to have these two states – North Macedonia and Albania – begin their accession negotiations no later than October. It will also be symbolic for us to conduct the Presidency of the Berlin Process with our friends from North Macedonia,” said Zaharieva.

The Berlin Process stared in Berlin in 2014 with Conference of Western Balkan States , followed by the 2015 Vienna Summit, 2016 Paris Summit and the 2017 Trieste Summit. The last conference was held in July 2018 in London.

Roth: Politicians have to be decisive and overcome stereotypes