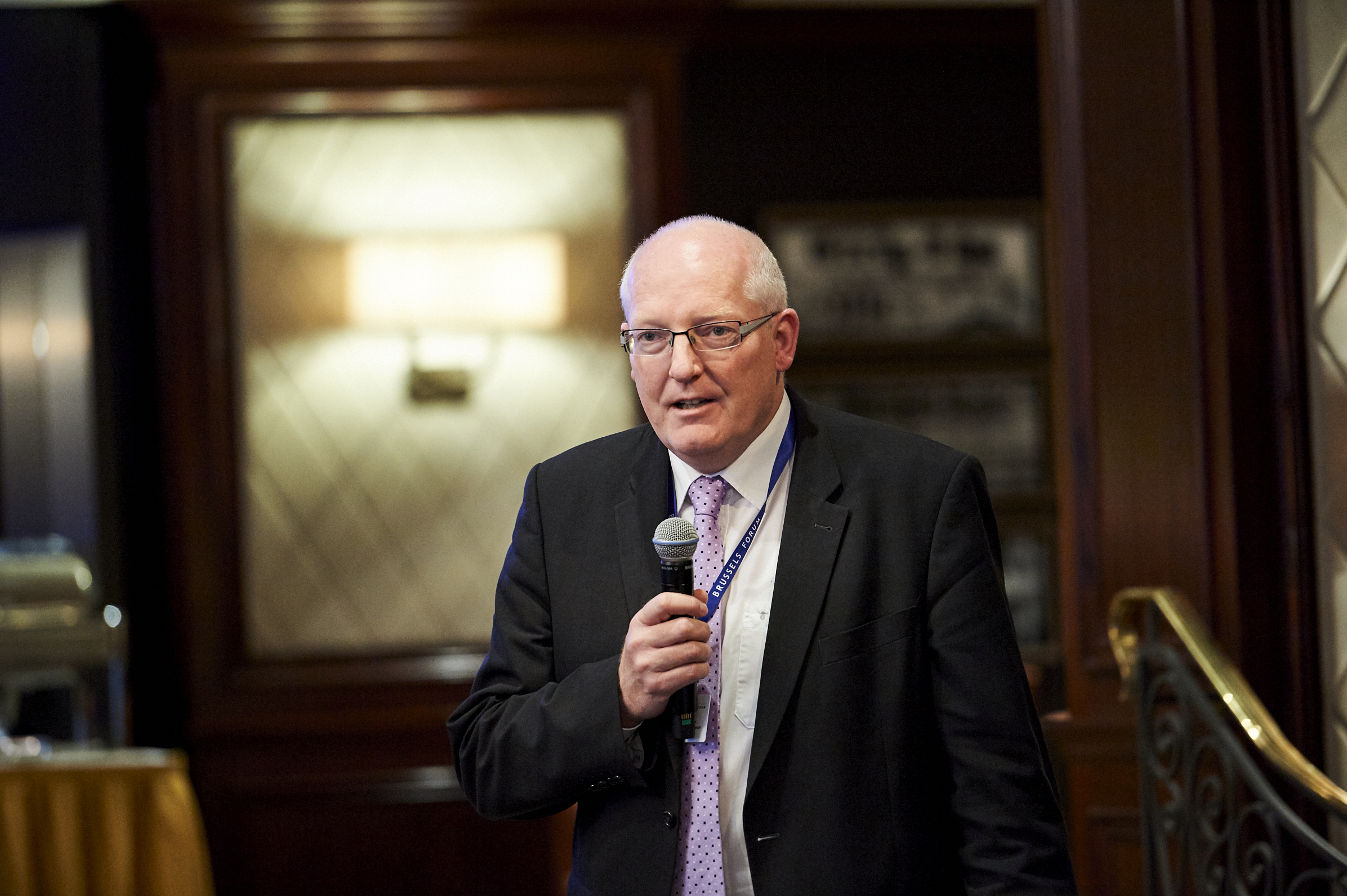 Interview with Thomas Kleine-Brockhoff, vice president and director of the Berlin office of the German Marshall Fund of the United States. The interview was conducted during GMF Brussels Forum 2019, which was held on 27-29 June in the Belgian capital.

European Western Balkans: Germany was one of the most important supporters of the EU enlargement in the past. Do you think this has changed in the last couple of years? Has the support towards enlargement diminished in Germany?

That said, I am a little bit surprised that support is still strong in the policy community. You could have imagined a declining support given the environment, but I do not see that.

Even though the Berlin meeting in policy terms did not produce much, there is an ongoing agenda of trying to include the Western Balkans in the European family that comes out of Berlin. You could have seen it this year in the case of North Macedonia name dispute. You could see the support in having one major issue taken of the agenda.

EWB: Having this in mind, how do you explain the recent decision to postpone the opening of accession negotiations with North Macedonia and Albania, especially having in mind the support coming from Germany on the name change?

TKB: First of all, the issue is about the linkage between Albania and North Macedonia, that was decided some time ago, and the question is whether this is doable within the EU, with France, with the critics in the Netherlands, Austria and some other countries. Germany has been trying to fiddle that issue. Even though that decision has been taken, I am still convinced that there is an ongoing support for that agenda.

EWB: Do you believe that retreat of Angela Merkel has impacted the German policy on enlargement as she was seen as someone who was personally very supportive?

TKB: Angela Merkel is still the chancellor until 2021. So far, there is no consequence of that. The policy is pretty stable and in some areas, probably too stable. I do not see an effect of that now.

I can easily see that a new chancellor could reassess foreign policy this time around because of the size of the issues. I do not know what the consequences for the Western Balkans would be, but it would be in the context of a larger look at current policies.

EWB: We know that enlargement is not particularly popular in most EU member states, especially in the older members. Is that a divisive issue in German politics?

TKB: It is not an issue. It is not a popular issue, the population at large is not on their front burner. It is as a technical issue of a small group of people. If you ask a man on the street whether he is for or against, he probably does not have an opinion. I do not know whether opinion polls have been taken.

What you actually look at is a policy elite, and only a small element of the policy elite that actually deals with this. I do not see a shift in that. There is a general support that completion of a European agenda is necessary and desirable to prevent a further upheaval down the road and to complete a European mission and agenda. I do not see that as changed.

EWB: When it comes to the Kosovo issue, which is one of the most important issues right now in the Western Balkans, Germany had a pretty strong role in this process from the very beginning. However, there is an impression that last year that the Germany role was somewhat diminished and that the US became a lot more present in solving this problem, there was a dispute about the border changes and Germany was opposed to it while the US was open to it. Do you think that German position in the Western Balkans has weakened or is there perhaps a split between US and German interests?

TKB: I do not think there is a weakening, I think that there is a challenge of the differing outlooks of the American and German administration that may result in a weakening because it is not a joined effort, but there is no weakening on the German side.

It is not a secret that the German and the American administration do not see eye to eye on a long list of issues. The Balkans was identified as one of those areas where you could actually insulate from a larger list of disagreements. It was seen as a joined effort and it has been traditionally a joined effort. The Balkans was specifically identified as an area of German – American cooperation, even in times when you have disagreements in all kind of areas.

This idea did not work, because those differences also translated into the Western Balkans agenda. You could see that in the border issue in Kosovo. That has contributed to weakening the whole effort, because of the divided Western powers – and that is not helpful to the process.

EWB: Why do you think Germany is so opposed to any border changes? Germany was very vocal from the very beginning. What do you see as the reason behind this very strong opposition to this? Is it principle or it is related to Kosovo itself?

TKB: I think it is both. The main argument is the ripple effect – domino that could be set off by being open to the idea of the border change.

But the argument also entails that once you open that Pandora’s box, you will have border changes that are not consensual. It starts with Republika Srpska as the next step. Because they have already announced the day this agreement is signed, they will try to follow suit. That is the rationale and also the limitation of the German argument.

EWB: Observers might say that the US policy is different because the US is far away from the Western Balkans, but the Balkans is Europe’s back yard, so countries like Germany are more interested in the long-term effects of some of these policies whereas, the US is perhaps more interested in just keeping the Russians out at the present moment. Is there a such a division?

TKB: No, I would defend the American position against that observation. I would not assume that is the American position. When you look into the Holbrook era, and when you look back in the Dayton era, you could see that if there were no geopolitical concern the US would not be involved. Because there is a bigger agenda around it, but that does not translate into a disregard for the short-term.

I think that American agenda on this is legitimate and it is also well-meaning. I do not disregard the American position on this, I just happen to observe that there is a different perspective on this in Berlin.

By the way, this is not the first time that they have disagreed on the elements of agenda, and if you follow the dealings of the Kosovars with the Serbians, this is evolving consistently. Therefore, I do not see this as a long-term split between the US and Germany, I see this as a tactical difference of views, that might be overtaken by events tomorrow.

EWB: Germany recently launched together with France the initiative about solving the Kosovo issue. After the meeting in Berlin in April, it was supposed to continue now in Paris, but it was cancelled. Do you think that Germany will be able to push its own vision with this initiative, or it is not as successful?

TKB: I do not think it is about pushing your own agenda it is about facilitating the parties to agree with each other. It is not about your own vision. I do not know what the vision of Germany on Kosovo issue would be.

The first meeting did not lead so far. You could argue that the postponement of the second meeting is a consequence of the lack of outcome of the first one.

I think we are seeing two things here – one, that there is an ongoing engagement and an ongoing push to help solve the problem – that is the good news.

The bad news is that it has not led to anything so far and it does not seem to have a clear path supported by the parties at the current stage. That is the reason why we see postponements and lack of outcomes. So, engagement – yes, willingness to get parties to the table – yes, outcomes – not seen so far.