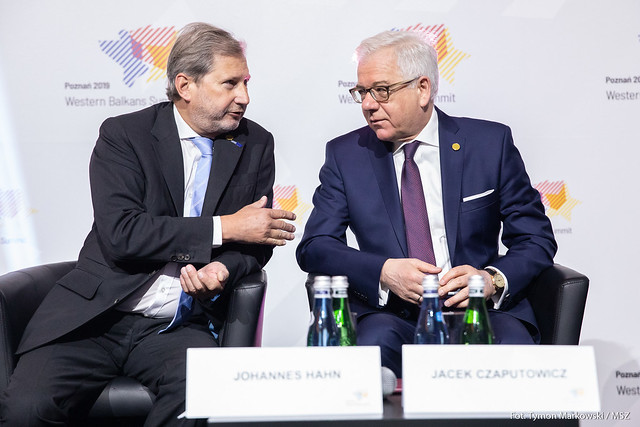 POZNAŃ – The whole region should follow the example of North Macedonia and step up the pace of reforms, particularly on the rule of law, fundamental rights and good governance, stated on Thursday the EU Commissioner Johannes Hahn at the Western Balkans Summit in Poznań.

At the opening of the Civil Society Forum and Business Forum, the EU Commissioner explained that the EU, must now live up to its commitments and give credit where credit is due to the country that has made a historic achievement, adding that failure to reward objective progress will damage the EU’s credibility.

“I stand by the Commission’s recommendation to open accession negotiations with Albania and North Macedonia and I count on the October Council to follow our positive assessment. Both countries have delivered on reforms, in particular in areas mentioned by the Council conclusions of June 2018,” said Hahn at the Summit in Poznań.

Speaking about IPA III, he pointed out that the Western Balkans can continue to count on the EU’s support for reforms in the years to come.

“Nothing demonstrates that better than the proposed 13% increase of the Instrument for Pre-Accession Assistance (IPA III). With the revamped Western Balkans Investment Framework, we at our disposal yet another powerful tool to bring in much needed investment to the region,” said Hahn.

When it comes to the Connectivity Agenda, which is in the focus of this year’s Summit, he said that the Western Balkan economies are already closely integrated with the EU, emphasising that more than 70% of the region’s trade of the Western Balkans is with EU due to the Stabilisation and Association agreements.

The EU Commissioner explained that by removing traffic bottlenecks, travelling time for citizens will be reduced, as well as transport cost for businesses.

“This will help the region to exploit its economic potential even better. The investments will also enhance the energy security of the region and of the EU,” said Hahn.

He, however, said that the Connectivity Agenda is “more than roads, bridges and power lines”, urging the Western Balkans to participate in the economies of the future.

“Those economies are digital and they are green. By investing in digital, we are providing the region with the means to participate in the digital revolution,” said Hahn.

The EU Commissioner also mentioned the trade barriers imposed by Kosovo on the goods coming from Serbia and Bosnia and Herzegovina, urging parties to resolve these issues as soon as possible.

“We were hoping to sign here in Poznan several agreements to liberalise trade in services and to facilitate the mobility of professionals. Regrettably, the irritants in place have severely strained work under CEFTA. We strongly object to the imposition of trade barriers as a means of political pressure,” stated Hahn.

He added that leaders of the Western Balkans need to work towards good neighbourly relations, regional cooperation and meaningful reconciliation since those are prerequisites for joining the EU.

Dimitrov: We want to resolve the name dispute