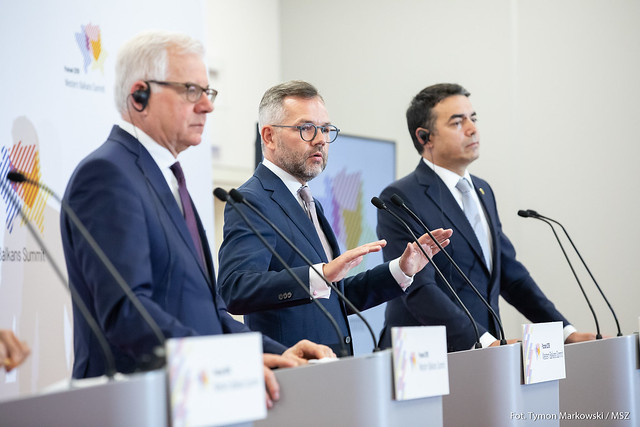 POZNAŃ – Today we have seen how difficult it is to conduct the dialogue between Serbia and Kosovo, and in this regard, there is a lot of room for improvement, said on Thursday Michael Roth, member of the German Bundestag, at the Western Balkans Summit in Poznań.

When it comes to Belgrade – Pristina Dialogue Roth explained that there are a lot of things to be done if politicians are decisive enough and they overcome stereotypes, just as North Macedonia and Greece did when they solved the name dispute.

He also explained that next year North Macedonia and Bulgaria will hold joint presidency over the Berlin Process since those countries serve as an example of good neighbourly relations.

“North Macedonia and Bulgaria are more than happy and are expecting tomorrow’s meeting of the heads of states and the heads of governments when it comes to discussing the future perspectives of the Western Balkans,” said Roth.

Speaking about the tangible results of the Berlin Process, such as the Regional Youth Cooperation Office (RYCO), the Member of Bundestag expressed his hope that the meetings will continue into the future and feature more young people.

“This is all based on French and German initiative RYCO and hopefully, more funds will be assigned to this very goal along with bigger parliamentary quotas assigned to the project for it to continue more dynamically. It is not about economic issues only, it is also social issues, as well,” noted Roth.

He also praised the Polish presidency over the Berlin Process, as they are the once that had great experience in terms of transformation. Roth pointed out that the citizens of the region should focus on all the benefits the Berlin Process is creating.

“We have to take a closer look at the end results and see light in the tunnel, such as digitalisation, infrastructure, economic solutions, as well as regional cooperation and reconciliation,” concluded Roth.

Plenković: Slovenia and Croatia to resolve the dispute bilaterally