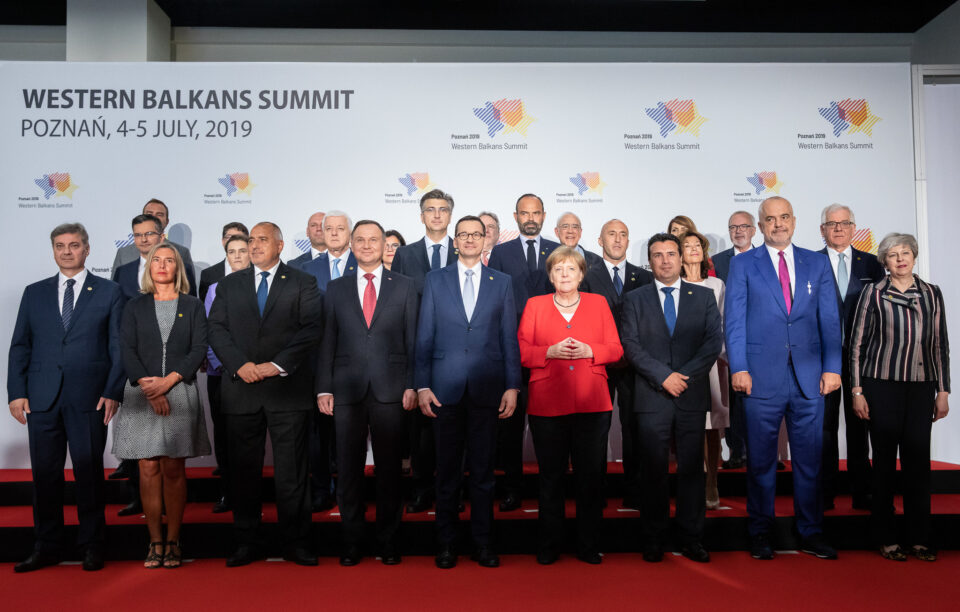 Western Balkans Summit in Poznań in 2019; Photo: Flickr / Ministry of Foreign Affairs of the Republic of Poland / Tymon Markowski / MSZ

POZNAŃ – The Leaders participating at the Berlin Process Summit in Poznań unanimously reaffirmed their unequivocal support for the European perspective of the Western Balkans, reads the Chair’s conclusions released today by the Polish Government.

The document, published as the annual three-day meeting of the region’s think tank and civil society members, as well as businessmen and the leaders of the Western Balkans, together with the leaders of the countries participating in the Berlin Process, also contains the reflections on the future of the initiative, welcoming the upcoming first joint Presidency of the Republic of Bulgaria and the Republic of North Macedonia for 2020.

“Holding the co-presidency by the Republic of North Macedonia is an important symbol of greater ownership of the process by the region”, the document reads.

The proposal of several of Berlin Process Parliaments to contribute to this dynamic through the organization of a parliamentary dialogue is also supported.

“Participants supported the prospect of an interparliamentary meeting before the next summit, leaving it is up to Parliaments to define the modalities and content of their exchanges”, it is stated in the conclusions.

Support for the Connectivity Agenda, Regional Economic Area, as well as commitment to strengthening the rule of law, fundamental rights and good governance in the region are emphasised as well.

When it comes to the Connectivity Agenda, the leaders emphasised the need to promote comprehensive, sustainable and rules-based connectivity, and onfirmed that the
implementation of the 8 new and the 31 already approved large-scale infrastructure investments remain a key item on their Agenda.

“They underlined the key role of the Western Balkans Investment Framework for identifying concrete projects to be financed and enhancing synergies between International and European institutions as well as Western Balkans in the field of sustainable connectivity,” reads the conclusions.

On the Think Tank Forum and Civil Society Forum, it is said that the leaders recognised the role of the non-governmental organization as partners for government in creating policies related to the public good, and they confirmed support for development of regional cooperation among expert groups to increase their capacities and elaborate common proposals of solutions to the crucial problems of the region.

Full text of the Conclusions can be found HERE.

Old problems for the new Crisis Staff in Serbia