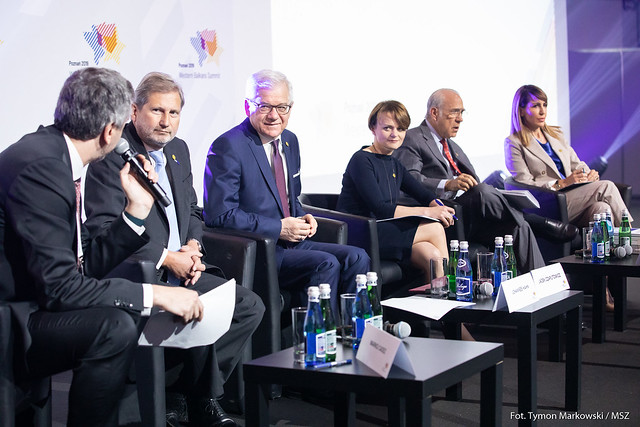 POZNAŃ – The announcement of the first joint presidency over the Berlin Process, calls for the EU to name every state capture in the region, support for the opening of accession negotiations with Albania and North Macedonia – these are the main takeaways from the 2019 Poznań Summit.

This three-day Summit that consisted of Think Tank Forum, Civil Society Forum, Business Forum, Ministerial meetings and Leaders’ Summit, brought the Western Balkans in focus at a time when the EU leaders struggle to choose candidates for top jobs.

This caused some concern on the first day at the Think Tank Forum, where experts called the EU to show a stronger commitment to the region.

On the other hand, the message from the EU is clear – the enlargement will be in focus of the next EU Commission.

“We are now in the transition period, but I am convinced that the Western Balkans enlargement will remain a top priority of the next European Commission, as it was and still is of the Junker’s Commission,” emphasised Popowski.

It is also concluded that the EU should simplify and improve the accession process, every state capture must be named, and there is a need to have an open dialogue between the Western Balkan countries and the Member States.

At the opening of the Civil Society Forum and Business Forum, the EU Commissioner Johannes Hahn explained that leaders of the Western Balkans need to work towards good neighbourly relations, regional cooperation and meaningful reconciliation since those are prerequisites for joining the EU.

With the Commissioner agreed Majlinda Bregu, Secretary-General of the Regional Cooperation Council (RCC), who presented this year’s Balkan Barometer whose findings show that 64% of businesses and 56% of citizens consider the enlargement process as a good thing.

On the other hand, the highlight of the Business Forum was on the plan of the European Commission to provide 2.5 million euro to the Western Balkans 6 Chamber Investment Forum (WB6 CIF), in order to support small and medium-sized enterprises (SMEs) in the region.

The project will enable more than 1,200 SMEs from all six Western Balkan economies to receive concrete support from WB6 CIF over the next three years, in order to improve production and export capacities, become suppliers of multinational corporations, as well as to attract EU funds and foreign investments.

North Macedonia to serve as an example of reconciliation

The whole region should follow the example of North Macedonia and step up the pace of reforms, particularly on the rule of law, fundamental rights and good governance, stated the EU Commissioner Johannes Hahn.

This was also reiterated by Christian Danielsson, Director-General for European Neighbourhood Policy and Enlargement Negotiations, who underscored that both Albania and North Macedonia have delivered on reforms, especially in the areas mentioned by the Council’s conclusions in 2018, adding that North Macedonia has received overall appreciations due to the Prespa Agreement.

“North Macedonia has become the best practice example in many areas which the whole region should follow, by stepping up the pace of reforms not only in the economic area but also regarding the rule of law, fundamental rights, fighting corruption and good governance,” explained Danielsson.

With this came the announcement – North Macedonia and Bulgaria will organise the next summit of the Berlin Process.

“Holding a bilateral presidency over the Berlin Process is very important to the process itself and particularly vital to the proximity between these nations within the Western Balkans, and it provides the green light and motivation to expand the collaboration on to other platforms,” stated Ministers of Foreign Affairs of North Macedonia Nikola Dimitrov.

At the joint press conference Minister of Foreign Affairs of Bulgaria Ekaterina Zakharieva expressed her belief that joint presidency with North Macedonia will empower Western Balkans states to resolve their own problems.

Call to open the accession negotiations with Albania and North Macedonia

One of the key messages of the Summit was directed to the EU leaders, who should keep its promise and reach a positive decision on the opening of accession negotiations with North Macedonia and Albania.

Poland was one of the 13 EU members, mostly from Central and Eastern Europe, to propose an initiative for the opening of negotiations with Skopje and Tirana in June, and President of Poland Andrzej Duda called the EU Member States to give a green light to Albania and North Macedonia.

The same request the Prime Minister of North Macedonia Zoran Zaev made during the joint press conference with German Chancellor Angela Merkel.

“We are not asking to become a member of the EU, we are just asking for further motivation to improve ourselves and to move closer towards European societies,” stated Zaev.

Belgrade – Pristina Dialogue: Politicians have to be decisive and overcome stereotypes

When it comes to Belgrade – Pristina Dialogue Michael Roth, member of the German Bundestag explained that there are a lot of things to be done if politicians are decisive enough and they overcome stereotypes, just as North Macedonia and Greece did when they solved the name dispute.

The EU Commissioner also mentioned the trade barriers imposed by Kosovo on the goods coming from Serbia and Bosnia and Herzegovina, urging parties to resolve these issues as soon as possible.

“We were hoping to sign here in Poznań several agreements to liberalise trade in services and to facilitate the mobility of professionals. Regrettably, the irritants in place have severely strained work under CEFTA. We strongly object to the imposition of trade barriers as a means of political pressure,” stated Hahn.

Chair’s conclusions of the Western Balkans Summit in Poznań

The Leaders participating at the Berlin Process Summit in Poznań unanimously reaffirmed their unequivocal support for the European perspective of the Western Balkans, reads the Chair’s conclusions released by the Polish Government.

The Leaders of the Western Balkans, reconfirmed their commitment to strengthening the rule of law, fundamental rights and good governance in the region.

“They agreed on the importance of regional cooperation, good neighbourly relations and reconciliation, which are essential for the region to progress on its European path,” reads the Conclusions.

They also committed to overcoming current difficulties in the region in order to achieve substantial progress in areas such as regional economic integration and connectivity for the benefit of the citizens and economic operators.