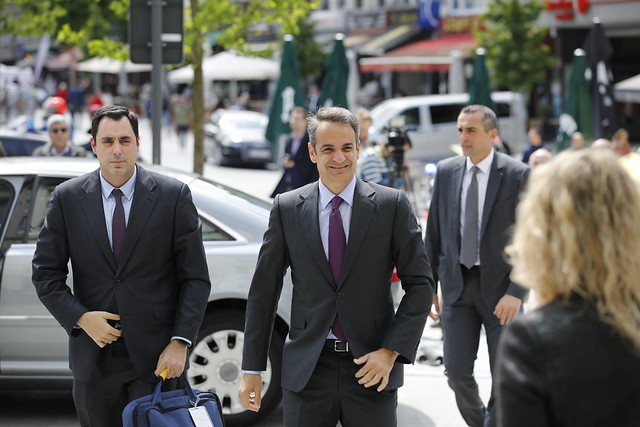 Kyriakos Mitsotakis at the EPP Summit in May 2019; Photo: Flickr / European Peope's Party

In January this year, then opposition party New Democracy voted against the ratification of the Prespa Agreement with newly-renamed North Macedonia. Leader of the opposition Kyriakos Mitsotakis stated that the deal will create more problems for Greece than it solves.

Will yesterday’s election victory of ND create new difficulties in the relationship between Athens and Skopje, which have advanced towards full normalisation during the tenure of Alexis Tsipras?

The answer is – unlikely, thinks Nikolaos Tzifakis, Associate Professor of International Relations at the University of the Peloponnese and BiEPAG member.

“The Prespa Agreement was not the main issue during the election campaign period. Kyriakos Mitsotakis has repeatedly stated that he would not put into question an agreement that has been ratified by the Greek state”, explains Tzifakis.

This is in line with Mitsotakis’s position from January. Even though he had expressed his opposition towards the agreement, he also stated that “once an accord has been ratified, there is little that can be done to change it.”

However, Tzifakis reminds that the new Prime Minister, whose father Konstantinos was also head of government in the early 1990s, when the tensions over newly-independent Macedonia’s name were at their peak, will only accept a full implementation of the agreement.

According to the document, signed in June 2018, the new name of the country will be used in all circumstances, both domestically and internationally. Both parties have committed themselves to refraining from the claim of any territory, as well as implementing measures to prohibit any hostile activities, actions and propaganda.

If North Macedonia continues to respect and implement the Agreement, which also includes the provisions on political and economic cooperation, it should not worry about additional difficulties, especially when it comes to opening its EU accession negotiations, Tzifakis believes.

“Athens is not expected to change course on the question of North Macedonia’s accession negotiations as long as the implementation of the agreement advances smoothly”, he concludes.

With the victory of the New Democracy, European Council now has nine European People’s Party members, increasing its majority over centre and centre-left leaders.

ND’s campaign was focused on a pro-business program prioritising economic growth and new jobs by speeding up investments, Euractiv writes.

“The victory of New Democracy is great news for the Greek economy that desperately needs a different model of economic policy, revolving around the diminution of tax rates, the implementation of structural reforms and the stimulation of private investments”, Tzifakis points out.