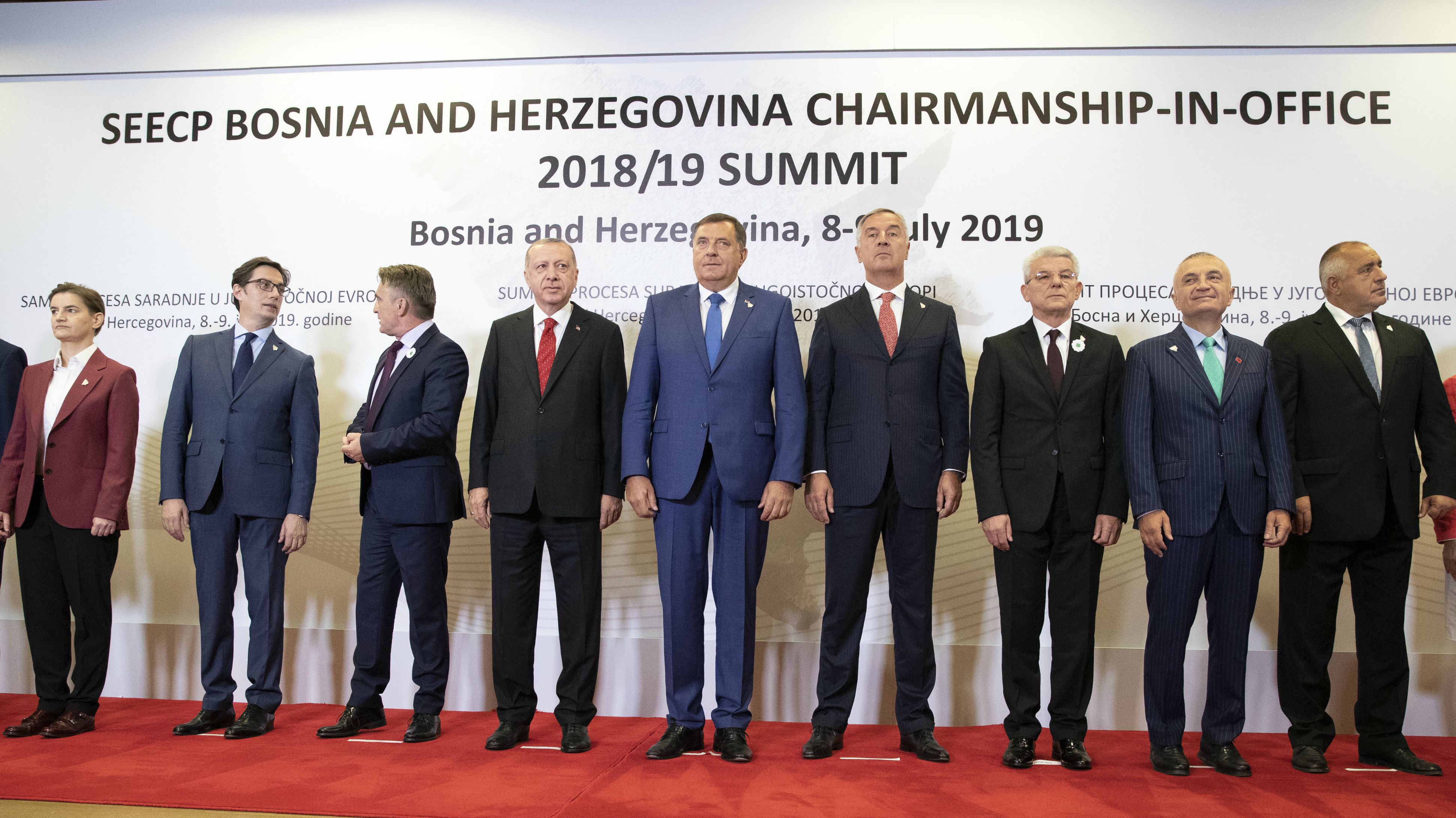 SARAJEVO / JAHORINA – Just a few days after the Poznań Summit, regional leaders had an opportunity to gather once again at the annual meeting of South-East European Cooperation Process in Sarajevo. The event was marked not as much by its conclusions, which only slightly differed from last year, but more by the presence, but also absence of some of the key regional actors.

President of Turkey Recep Tayyip Erdoğan joined his counterparts from Bosnia and Herzegovina, Montenegro, North Macedonia, Slovenia and Albania, as well as Prime Ministers of Serbia and Bulgaria, expressing his support to the Process, which was launched in 1996. On the other hand, the country that will be presiding over SEECP until 2020, Kosovo, refused to send its representatives.

Status of Kosovo once again divides the participants

“We are sorry that the delegation from Pristina is not with us, because of the missed opportunity for cooperation on the regional level”, stated member of the BiH Presidency Milorad Dodik, once of the hosts of the meeting.

Last week, President of Kosovo Hashim Thaçi announced his decline to come to the meeting, even though his country is taking over the presidency over the Process.

“Treatment and statements from the BiH Presidency are not conductive to good neighbourly relations and EU values and principles, thus preventing Kosovo from participating in the SEECP”, tweeted Thaçi on Saturday.

Bosnia and Herzegovina, alongside Serbia, does not recognize Kosovo’s independence. The trade between the two countries has been affected by the 100% tariffs imposed last year, and the free travel has not been established.

According to Dodik, BiH has fully respected its obligations under the international law when it comes to Kosovo’s participation, and there was no reason for its refusal to participate.

This view, however, is not shared by the Government of Albania, which refused to participate in solidarity with Kosovo.

A day after President Thaçi’s announcement, Acting Foreign Minister of Albania Gent Cakaj tweeted that his country is canceling the participation at SEECP Summit as well.

“There is no cooperation without equal treatment”, wrote Cakaj.

Nevertheless, President of Albania Ilir Meta, against whom the ruling Socialist Party has undertaken an impeachment procedure, has chosen to come despite Government’s position. He too expressed his support for Kosovo’s case.

“Mutual respect is of crucial importance for security and prosperity of us all. That is why Bosnia and Herzegovina should recognize the reality – Republic of Kosovo is an independent and sovereign country and should be treated with respect”, stated Meta.

This view was criticized by Prime Minister of Serbia Ana Brnabić, who pointed out that neither BiH nor SEECP recognizes Kosovo and called on President Meta to refrain from provocations, Radio Free Europe reports.

Returning to Sarajevo, where he held his election campaign last year, President of Turkey was keen to express his country’s support to the Cooperation Process.

„Full cooperation between South-East European countries is not only important for our countries but for the peace, stability and prosperity of the entire European continent“, Erdoğan said, adding that the Process is critical to the Balkan’s integration into EU institutions.

The integration, however, is seemingly slowing down, which was not left unnoticed by the President of Turkey.

“We’ve seen that the EU enlargement policy’s been blocked lately by some short-sighted populists. Negative trends, divisions and discrimination spreading across the continent are not only dangerous for Europe itself but for the future and the potential for this region to become a hope for many”, Erdoğan noted.

He concluded that Balkan countries should develop economic cooperation and in that sense, the Belgrade-Sarajevo expressway is of strategic importance. Additionally, he called for a meeting between BiH, Serbia and Croatia.

Declaration of the Summit: Sticking to familiar goals

As was the case with previous presidencies, the final meeting was closed with a Declaration outlining the goals region should pursue through mutual cooperation.

European perspective is the strongest provider of the impetus for the full transformation of the region and the promotion of democracy, human rights and fundamental freedoms, rule of law, mutual understanding, interconnectivity and good economic governance, leaders stated in the document.

“It is essential to maintain the momentum of enlargement and continuous commitment to reforms for the credibility of enlargement policy, based on strict and fair constitutionality, regional cooperation and good neighbourly relations and the principle of own merit,” reads the joint Declaration.

Need to broaden connectivity and prevent the exodus of a large number of educated and skilled young people were also highlighted.

The content of the Declaration is similar to the final document of Slovenia’s Presidency in 2018, which also singled out European integration, perspective of the young people and digital connectivity, as well as security, as the priorities of SEECP.

Regional Cooperation Council also held its annual meeting in the context of the Process, presenting its Work Programme 2020–2022 and Balkan Barometer 2019.

Declaration of the Summit of the South East European Cooperation Process