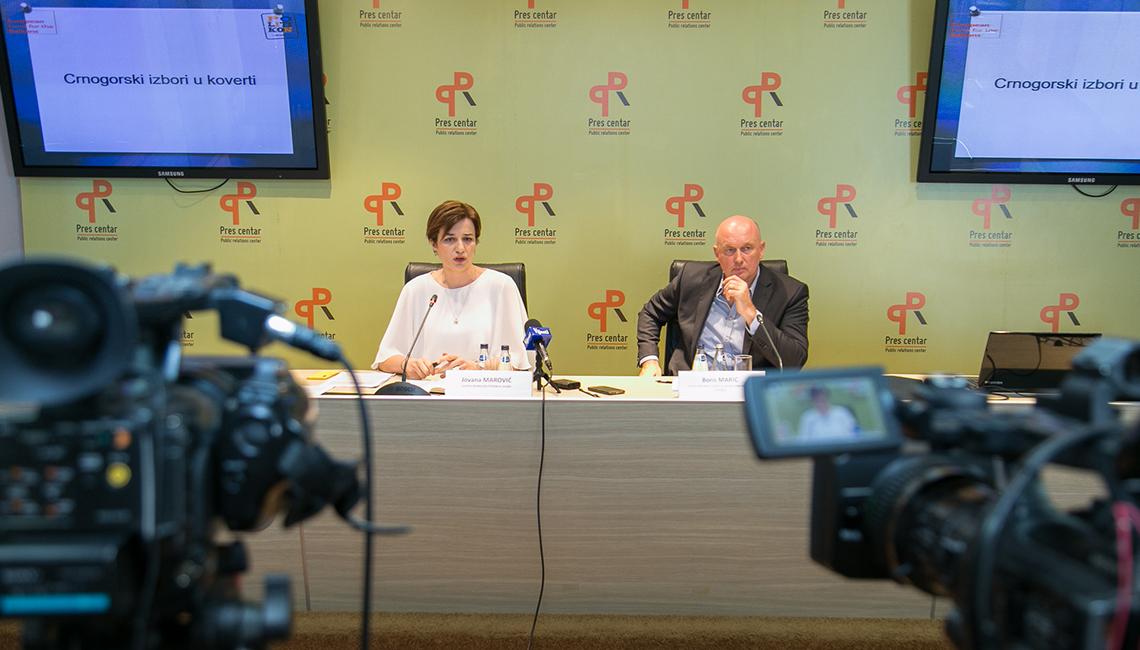 PODGORICA – The procedure for resolving the “Envelope” affair has to go towards proving the existence of high-level political corruption because it is in public interest and it is the only way to build institutions that will guarantee fair and free elections, it is stated at the press conference “Elections in Montenegro: Stuck in an Envelope” organised by the Politikon Network within the project “The Rule of Law in the Western Balkans: Reinventing the Rules of the Game“, which is being implemented with the CRTA from Serbia and the Tim Institute from North Macedonia, supported by the European Fund for the Balkans (EFB).

The Executive Director of the Politikon Network, Jovana Marović, explained that the Agency for Prevention of Corruption does not know precisely its competence, which is proved with two different statements made at the end of January and beginning of February.

“In one, the Agency is declaring that it does not have the authority in the case of ‘Envelope’, and in the second statement, nevertheless, it informs the public that certain activities will be carried out. This means that the Agency does not act on allegations of abuses and violations of the law, but acts after additional consultations,” Marović said in the PR Centre.

According to her, for the Special State Prosecutor’s Office, illegal financing of political parties is not a criminal offence against electoral rights.

“If there is no belief and perception of the public that the law is equal for all, there is no trust in the election process, which is the case in Montenegro. The latest Balkan Barometer survey shows that 59 per cent of the citizens of Montenegro does not believe that the law applies equally to all citizens,” said Marović.

She said that political responsibility in Montenegro is a sort of “mission impossible”.

“We saw how the parliament discussed the ‘Envelope’ affair. The Security and Defence Committee refused to conduct a control hearing, and the plenum debate remained without any conclusions. In this way we do not have political responsibility at all,” said Marović.

The Agency, as she believes, should change and improve the plan of measures, which are prepared in response to evaluation of the European Commission “since these measures now do not relate to what is a key problem in the work of the Agency, which is a lack of independence and a lack of proactivity,” said Marović.

Also, the Agency must, as she pointed out, announce all the decisions of the procedures in which it was involved.

The Executive Director of the Centre for Civil Liberties (CEGAS), Boris Marić, said that the Special State Prosecutor’s Office initiated the procedure in connection with the “Envelope” affair, but that the necessary step was not taken as part of that procedure, which is, as he said, taking a statement of the President of the Democratic Party of Socialists (DPS).

“The whole affair is qualified as a possible money laundering. I believe that it is in public interest to monitor the flow of money, and it seems to me that in this case, it is possible. It also seems to me and that this falls into domain of criminal offences, which are related to the violation of rights under the electoral law and legislation, and it could be established and proved that in this case there was political corruption at a high level. It would be the only right way,” said Marić.

He pointed out that every citizen in Montenegro can recognize apathy and note a high degree of mistrust in institutions.

“We have to defend the public interest, and it is in public interest that this procedure of resolving the ‘Envelope’ affair must go towards proving the existence of political corruption at a high level. This is the only way to create the basics for building institutions and a normative system that will guarantee fair and free elections,” said Marić.

According to him, the reaction of the European Commission, in the case of the “Envelope” affair, should be proactive.

“We are in one contractual relationship in the negotiation process. This proactive relationship should exist and the European Commission should come to Montenegro and make binding recommendations after a detailed examination. They can do it. We still have not announced the final criteria for key Chapter 23, which is all about this,” said Marić.

Albania to take over OSCE Chairmanship in 2020, Cakaj presents priorities