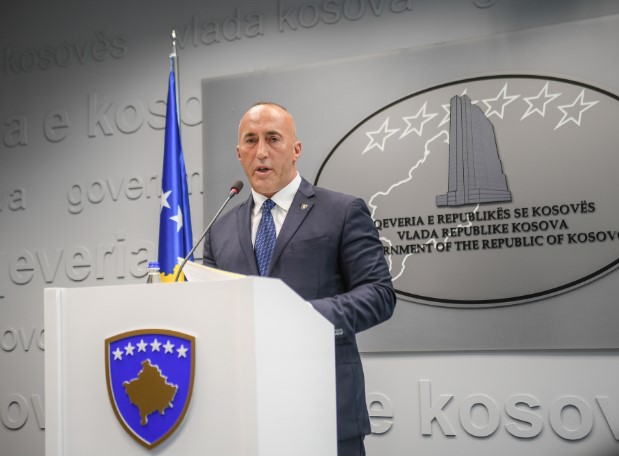 Ramush Haradinaj; Photo: Office of the Prime Minister of Kosovo

PRISTINA/BELGRADE/BRUSSELS – A day after his resignation, most political leaders in Kosovo have expressed their support to Ramush Haradinaj, who has been summoned for questioning by the Kosovo Specialist Prosecutor’s Office in The Hague. On the other hand, President of Serbia Aleksandar Vučić regards the move as a “political trick”, while early elections in Kosovo seem likely.

Haradinaj, Prime Minister since September 2017, has resigned to go to Hague for the second time in his career, previously making the same decision in 2005 after spending several months in office. He was acquitted by the International Criminal Tribunal for former Yugoslavia in 2008 and 2012 for his role as a commander of Kosovo Liberation Army during the 1998-1999 war.

Nevertheless, he is now suspected by Kosovo Specialist Chambers & Prosecutor’s Office, which are a part of Kosovo’s legal system but are based in the Netherlands and staffed by internationals. They have been established by Kosovo Assembly, with the task of prosecuting crimes against humanity, war crimes and other crimes under Kosovo law which allegedly occurred between 1 January 1998 and 31 December 2000.

President of Kosovo Hashim Thaçi expressed his regret over the Prosecutor’s Office decision on Friday, together with his conviction of the “purity of the Kosovo Liberation Army War”.

“I respect the decision of Prime Minister of Kosovo and, as President of the Republic of Kosovo, assure you that I will act based on my constitutional and legal competences for which the citizens of Kosovo will be informed on time. I believe in the purity of the Kosovo Liberation Army war and I believe in the high moral values of freedom soldiers. Neither the values of our freedom nor the war of the KLA can be violated by anyone,” Thaçi said, Gazeta Express reports.

Thaçi also said that his own adviser, Bislim Zyrapi, had been called for questioning by the Hague prosecutors.

The support also comes from other partners in government. According to Pristina Insight, Fatmir Limaj, the head of the NISMA party, who was also acquitted of wartime crimes by the Hague Tribunal, said that the call for Haradinaj to give evidence as a suspect was unjust.

“Unfortunately, this court was established by the Kosovo Assembly, so the only alternative is confronting the slanders of the enemies of Kosovo with facts,” said Limaj, whose party is part of the governing coalition.

There are currently no reactions from Srpska Lista, the biggest party of ethnic Serbian minority in Kosovo, which was also a coalition partner of Haradinaj’s AAK.

Kosovo’s opposition: The right resignation for the wrong reasons

Two of the biggest opposition parties in the country, Democratic League of Kosovo (LDK) and Vetëvendosje!, which were both extremely critical of Haradinaj’s government and on several occasions attempted to stage a vote of no confidence, are both convinced of the former Prime Minister’s innocence.

“The LDK has continually asked for the resignation of this government, but we feel sorry this is happening because of the invitation from the Specialist Chambers,” wrote the leader of LDK Isa Mustafa on Facebook, Pristina Insight reports.

He said he believed that the KLA’s war was just and that Haradinaj’s innocence will be proven again.

Similarly, Vetëvendosje!’s leader Albin Kurti regards the move as “the right resignation for the wrong reasons”.

He reminded that his party was against the formation of the Special Prosecutor’s Office and added that Haradinaj has made a number of political mistakes, including demarcation with Montengro, formation of a negotiating team with Serbia and various corruption affairs.

President of Serbia: Resignation is a political trick

A day after Haradinaj’s resignation, President of Serbia Aleksandar Vučić assesses his decision as a “political trick” aimed at boosting his popularity domestically.

“He wants to defeat his rivals, to become a hero fighting for a unified Kosovo, and make all other unworthy of such a leader who is taking them to a brighter future”, said Vučić, N1 reports, adding that Haradinaj will be released after 48 hours.

The position of Serbs in Kosovo, he believes, will become even more difficult.

“The resignation will lead to an additional homogenization of Albanians, make their positions more extreme and their hatred for Serbs and Serbian state, which they see as guilty for everything that is happening to Haradinaj, even more severe”, stated Vučić.

According to him, Serbia wants to continue with the dialogue, but this would be impossible during the elections, the aim of which is to double Haradinaj’s support.

No comments from EU, support from Albania

EU Spokesperson Maja Kocijančič stated yesterday that the Brussels had been informed about Haradinaj’s decision, not giving away anything additional.

“At this moment, we do not have further comments”, said Kocijančič.

EU High Representative Federica Mogherini and Commissioner for Enlargement Negotiations Johannes Hahn are yet to react to the developments.

In the meantime, leader of the opposition in Albania, Lulzim Basha, expressed his support for Haradinaj.

“The resignation of Prime Minister Ramush Haradinaj is the act of a man who puts Motherland over everything… Ramush Haradinaj is Kosovo – Free Kosovo, Independent Kosovo, European Kosovo. Nobody and nothing can profane Kosovo’s liberation war and the sublime sacrifice of the Haradinaj family on the altar of freedom”, stated Basha, Albanian Daily News report.

Early elections probable, tariffs remaining, demarcation back on the table?

The most immanent question facing Kosovo today is whether a new government will be elected by the current parliament, or the citizens will go to the early polls. The decision will ultimately be made by President Thaçi.

During yesterday’s press conference, Haradinaj said that his AAK party is ready to participate in new elections.

Similar announcement was made by both LDK and Vetëvendosje!, and without their support, a government reconstruction is unlikely, KoSSev writes.

The portal reminds that Haradinaj’s government was already unstable and that the early elections were expected for some time.

“The elections are the best option for Haradinaj, who is right now at the height of his popularity and is seen as somebody who has withstood the pressure and has not revoked tariffs for seven months”, KoSSev emphasises.

One of the final statements by Haradinaj as the Prime Minister was that 100% tariffs, imposed on goods from Serbia and Bosnia and Herzegovina in November last year, will remain in place.

Finally, the issue of demarcation/exchange of territories is once again in focus, assesses Deutsche Welle.

“Haradinaj’s retreat from political stage – even if it is a temporary one – will change the scene in Kosovo. Hashim Thaçi and his Democratic Party of Kosovo are left without their main political opponent when it comes to the dialogue with Belgrade. This could lead to heating up of the proposal that is being discussed for more than a year – territory in exchange for recognition”, writes Vilma Filaj-Balvora for DW.

According to her, progress in the area of  political dialogue should be expected, but any compromise not supported by the majority of citizens should be avoided for the sake of stability.