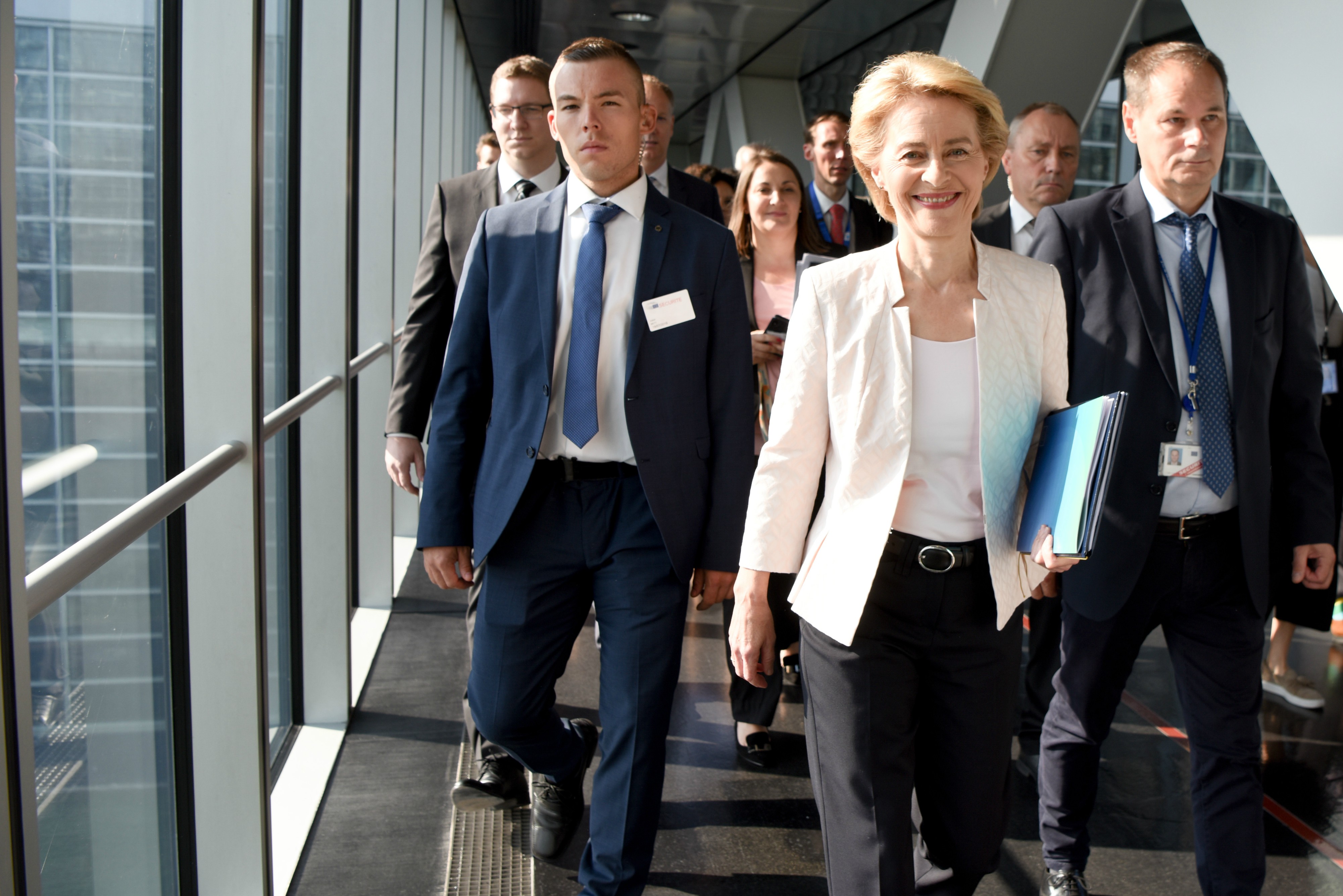 “The accession process offers a unique opportunity to promote and share our core values and interests,” stated Ursula von der Leyen in her Political Guidelines for the next EU Commission.

She reaffirmed the European perspective of the Western Balkans while explaining that she fully supports and stands behind the European Commission’s proposal to open negotiations with North Macedonia and Albania.

Now that the Former German Defence Minister has been elected as the first female President of the European Commission, the countries of the Western Balkans are closely monitoring the situation around the composition of the new Commission and who will be the next EU High Representative for Foreign Affairs and Security Policy.

Last week von der Leyen, member of the German CDU and the European People’s Party, received 383 votes of the MEPs, which is only 7 more than the required absolute majority. The composition of von der Leyen’s Commission will be known by the autumn, and it will have to be confirmed as a block by the Parliament.

While everyone waits to hear who are going to be the new faces of the Commission, whose work will begin on November 1, and what will be their position towards enlargement, there has been some speculations that Hungary and Slovenia share interest when it comes to enlargement.

Also, the current European Commissioner for European Neighbourhood Policy and Enlargement Negotiations Johannes Hahn was nominated by Austria’s interim Chancellor Brigitte Bierlein to remain at the EU Commission for a third term, following discussions with all parties in the Austrian parliament. Hahn, who will work until October on this position, previously worked as the Regional Commissioner in the Commission under President José Manuel Barroso.

Spain and Kosovo – an opportunity for communication or a strong opponent?

Since Spain is one of the five countries of the EU that do not recognise Kosovo, the position of the High Representative of the Union for Foreign Affairs and Security Policy took the centre of attention in Pristina, due to the fact that the EU facilitated dialogue between Kosovo and Serbia has been led by the EU External Action Services.

Executive Director of the CiviKos Platform and a member of BiEPAG, Donika Emini, explains that the appointment of the 72-year-old Spanish Foreign Minister as the head of the EEAS sparked many debates in Kosovo.

“Coming from one of the non-recognising countries, Spain did not only hesitate to establish bilateral communication with Kosovo, but it played a destructive role in the EU integration process for Kosovo,” she says, adding that one of the most important examples is the vocal protests of Spanish leaders against Kosovo during the EU – Western Balkans Summit in Sofia in 2018.

Emini notes that having a Spaniard leading the EEAS and the EU facilitated dialogue between Kosovo and Serbia can be assessed from both positive and negative angles. As she points out that suspicion sparked in Kosovo is directly and rightly linked with the origin of Borrelli, Emini, however, explains that one thing should be clarified to the public – the EEAS operates in full coordination with the EU member states, and that any political action that is against the general spirit of the EU values or interests can lead to full discretization of the institution and the leading person.

However, she says that the fear that Borrell might reflect the political positioning of Spain is the key concern in Kosovo, but she warns it could be very naïve to expect that Borrell will completely be detached from Spain and the political stance of his country towards Kosovo.

Emini also adds that Kosovo has been facing the ‘power asymmetry’ in the framework of the process due to the fact that for the EU, Serbia is a country, whereas Kosovo is not – this due to the five non-recognisers among which Borrell’s Spain is one of the key obstacles in the EU and NATO integration process of Kosovo.

“Having a Spaniard as the lead of the dialogue might further increase the feeling of power asymmetry among Kosovars – and rightfully so. Spain has been promoted as the key Serbian ally against Kosovo, this position has been confirmed on regular basis by the Serbian leaders, but also by the Spanish leaders who did not hesitate to link the case of Kosovo with Catalonia,” Emini says.

From a positive aspect, she says that having Borrell leading the EEAS will provide the sole avenue that Kosovo has to increase communication with Spanish politicians.

“This would mark the first institutionalised communication between Spain and Kosovo since the independence in 2008, as we all are aware that the Spanish representatives not only refused to communicate with Kosovo representatives but their rejection to Kosovo was even manifested through vocal rejection and abandonment of meetings in which Kosovo has been participating,” she says adding that if this chance is rightly used by Kosovo, it will provide a unique opportunity to make Kosovo visible and acceptable by Spanish politicians in the EU circles.

On another note, she explains that having a Spaniard leading the dialogue might have a positive impact in Serbia.

Will the new officials have an enthusiastic approach towards enlargement policy?

Although not yet elected, the new EU officials are giving hard times to the candidate and potential candidate countries. With many predictions, it seems that the new officials might not have an enthusiastic approach towards enlargement policy, and with the last elections, it is believed that the EU policy will remain under a strong influence of national politics in the Member States.

With this agrees Srđan Majstorović, Chairman of the Governing Board of the European Policy Centre – CEP and a member of BiEPAG. He explains that the influence of the new EU officials is going to be defined by the nature of their election which deviated from the expected Spitzenkandidat model and was under the influence of the backroom agreements between the EU Member States.

“The role France has played in proposing a candidate for the President of the new European Commission is also important for the future orientation of the EU’s executive body. In given circumstances it is realistic to expect the less enthusiastic and vocal approach to the EU enlargement policy in general,” says Majstorović.

He expects that official narrative will be focused more on reforming or deepening of the EU itself, while topics concerning enlargement to the Western Balkan countries will be communicated “bellow the radar” from the unfavourable EU public expectations.

“Composition of the new European Commission and division of specific portfolios is going to be one of the first signs of the EU’s intentions regarding enlargement policy. Comprehensive, credible and efficient EU enlargement policy requires administrative, institutional and financial support with name, face and telephone number,” points out Majstorović, adding that rumours about the future of current DG NEAR are rightfully causing unease among the candidates and potential candidate countries.

He believes it is of utmost importance that the Western Balkan countries put their differences aside and express their unity by sending a joint initiative to the new President to maintain the position of Commissioner in charge of the EU enlargement in her team regardless of its actual title.

However, Majstorović explains that regardless of the composition and policy orientation of the newly appointed EU officials, democratic progress of the Western Balkan countries will primarily depend on their willingness to change and adapt to the EU legislative and institutional standards.

While the Western Balkan countries are waiting for the appointments of the new EU officials, instead of looking towards Brussels, they should be paying their attention to respecting the rule of law and fulfilling the recommendations laid out in this year’s EC report.

As it is said, North Macedonia still needs further efforts in order to prevent politicisation of public administration, ensure independence of the media and decrease the levels of corruption, Albania as well, has to put an effort in fight against corruption and organised crime, as well as independence of institutions, while frontrunners, Serbia and Montenegro have to speed up the pace of their reforms. Still only potential candidate countries, both Kosovo and Bosnia and Herzegovina are assessed to be „at an early stage” in most of the key areas: justice reform, fight against corruption and organized crime and developing a functioning market economy.

After all, only the progress of the countries could demonstrate the willingness to join the EU.