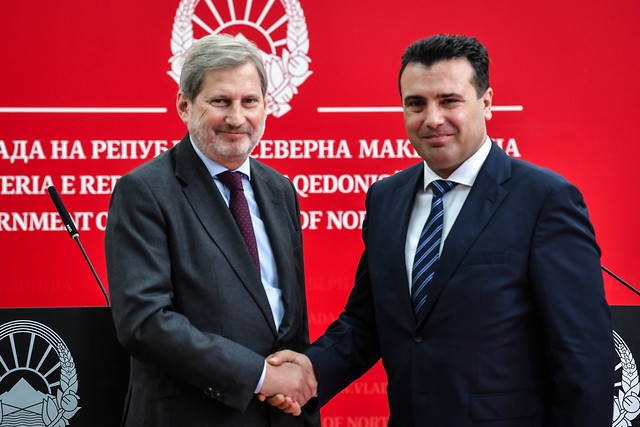 Johannes Hahn and Zoran Zaev in Skopje; Photo: Flickr / Government of the Republic of North Macedonia

SKOPJE – “The Republic of North Macedonia deserves a green light for start of the negotiations with EU in October on the ground of all its accomplishment in the reform process in the last few years, with the Prespa Agreement, but also with the Good Neighborly Relations Agreement with Bulgaria”, said the EU Commissioner for European Neighbourhood Policy and Enlargement Negotiations, Johannes Hahn, at today’s press conference after the meeting with the Prime Minister Zoran Zaev.

He added, however, that the Euro-Atlantic integration process does not end there, and that it is necessary to continue the reforms, especially in the area of securing the rule of law through the adoption of the Law on the Public Prosecutor’s Office and the uncompromising fight against corruption and crime. All political actors need to take into account the future and the interests of the citizens and the state, he stressed.

“It is a national goal, and everybody in the country have to understand that they need to work for it. Of course, there are debates and discussions, but I think all of you need to be aware of the ultimate purpose and the destiny of the country. It is my hope that all will support the necessary steps that need to be taken in order to achieve what so many of us want to see, and that is a green light for the start of accession talks, ” said Han.

He regretted that the EU member states have still not decided to open the accession negotiations and that they didn’t do it in June, because, as he emphasized, the country has achieved success and delivered everything it was asked to accomplish.

“North Macedonia worked hard and it is time for the EU to meet its commitments. Sometimes EU also has to deliver, and not only your country. However, it is necessary to continue with the further implementation of the reforms. The rule of law is indispensable for creating confidence in the institutions, but also for ensuring that the country will be stable, both politically and economically, ” Hahn said.

Prime Minister Zoran Zaev once again stressed his conviction that in October, finally, after 15 years, the country will receive the long-awaited date for the start of the negotiations.

“In the meantime, we will continue working on the reforms, so as not to give the EU an alibi for a different kind of decision,” Zaev said.

After meeting with Zaev, Hahn is expected to hold talks with President Stevo Pendarovski and opposition leaders, after which he will embark on a two-day visit to Belgrade.