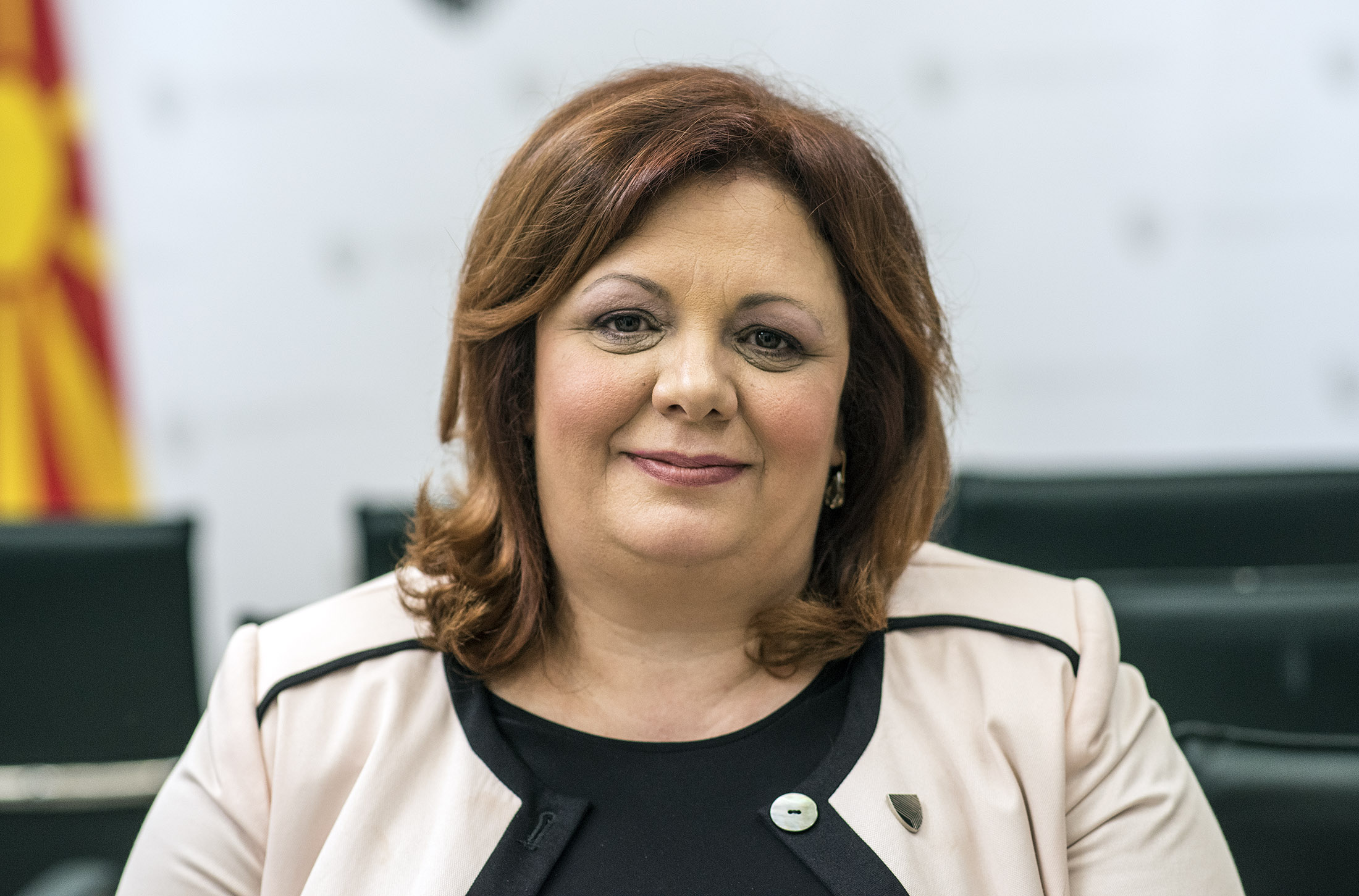 The new star of the Macedonian reality show “Extortion Affair” is the Chief Special Prosecutor Katica Janeva. Handcuffed and with allegations for abuse of authority and obtaining illegal property gain for herself and two other “partners”, she was taken to a one-month detention in Skopje.

A whip for a corrupt elite, a small-town warrior and an icon of the Colour revolution, as she was portrayed in the media, Katica Janeva led the Special Prosecution’s Office which was set up in 2016, as a result of an agreement between the authorities and the opposition to resolve the political crisis in North Macedonia. Back then leader of the opposition, Zoran Zaev, published recordings of the wiretapped conversations (so called “bombs“) of the leader of the ruling VMRO-DPMNE party which provided evidences of their illegal activities, protests across the country were triggered, leading to the fall of the Nikola Gruevski regime with EU mediation.

Four years later, a bomb from the other side of the field shakes the government of Zoran Zaev. The “Extortion” affair began on July 15, when Bojan Jovanovski, also known as Boki 13, the owner of Macedonian TV 1TV and ex-reality star, along with accomplice Zoran Milevski, were arrested on suspicion of racketeering Jordan Kamchev. According to Forbes’ list, Kamchev is the richest man in the North Macedonia. Kamchev himself is already a suspect in another case being handled by the Special Prosecution Service led by Janeva, and Jovanovski, due to his close relationship with Katica Janeva, has asked for five million euros from Kamchev in exchange for milder treatment by the Special Prosecution Office or the avoidance of punishment.

The flywheel of the affair comes as Italian newspaper La Verita, close to the party of Mateo Salvini, published a video that showed Jovanovski and Milevski exiting Kamchev’s house and carrying a million and a half euros in a Louis Vuitton bag. The answer to the question why the Italian newspaper deals with the North Macedonia affair could be found in Hungary and its Prime Minister – Viktor Orban.

Namely, after an indictment was filed against Nikola Gruevski in North Macedonia, he fled to Hungary and received political asylum. Given that the Hungarian Prime Minister Orban is very close to Salvini, whom he recently addressed as “the most important figure in Europe” and an ally for protection of Christianity and combating immigration. It is evident that Gruevski via Orban has an aim to shake up Zaev’s government and provoke early elections by publishing the compromising material and making a chance for VMRO-DMNE to regain power. Journalist Loris Geizer, who published the article, said he had received information from “concerned officials in the Macedonian administration.”

“Everything will be OK”

“I am shocked that my actions as prosecutor are correlated with the “Extortion” case. As Special Prosecutor, it is my responsibility to contact all suspects, as well as other persons related to criminal proceedings in this prosecutor’s office, and to try to extract as much information as possible from each of them in order to improve the position in the context of the suspects for each investigation or the case individually,” Janeva stated in her written statement.

What Janeva did not explain, and what the Prosecution and Chief Prosecutor Ljubomir Joveski claims to have an evidence of, is whether the five-thousand-euro worth furniture she received from one of the suspects is also part of the strategy of “extraction of information” and making suspects to assist in investigation. The Prosecution also claims that Janeva obtained far greater illegal gain and that Kamchev was not the only one who was the victim of the blackmailing of the Jovanovski – Milevski tandem. Her associates, most notably Prosecutor Lila Stefanova, claimed that Janeva has made a lot of decisions lately without consulting the rest of the team and has “worked on her own.” One of the things that Janeva did without consultation is the decision to return passport to the Kamchev, which allowed him to travel abroad.

The pressure on Prime Minister Zaev grew day by day, especially after it was announced that in one of the leaked conversations, Jovanovski mentioned that Zaev was “certainly not going to cause problems”. In his defence, the Prime Minister of North Macedonia said that he had never met Jovanovski, but that Kamchev did ask him for help and reported the extortion. Zaev then reported the case to the prosecution, which was the beginning of a months-long affair that not only called into question the legitimacy of all the cases and processes that the Special Prosecutor’s Office led by Janeva pursued, but also led to general instability in the country and shattered barely restored citizens’ confidence in institutions.

“Racketeering is a huge criminal affair that shakes the foundations of important state institutions and questions citizens’ confidence in us politicians and our state,” said President of North Macedonia Stevo Pendarovski. (DW, 8/8/2019)

Unlike the President, who reacted in a rather moderate manner, calling for the entire case to be thoroughly examined and all employees of the Prosecution to be scrutinized, Prime Minister Zaev was far more nervous. For days, there was a debate in the public about whether Zaev himself should resign and bear the political responsibility for the scandal in the institution that was one of the symbols of the re-establishment of the rule of law following the reign of Nikola Gruevski.

Asked by reporters, Zaev then said that he would not allow “a few criminals, a vain journalist and, to forgive me the LGBT population, a faggot to oust this government from power. Not!”. After apologizing to the LGBT population, Zaev reiterated that his government had implemented enough reforms and that joining NATO and opening negotiations with the EU were far more important than early elections.

What may further indicate the political responsibility of the ruling SDSM that according to the Macedonian media, the connection of some of the ministers from the Government and MPs with the civil society organization “International Alliance”, managed by Bojan Jovanovski.

However, the Attorney General of North Macedonia, in his statement on the case, was clear and said that the case should not be necessarily related to politics and that for the time being it was purely about the abuse of authority, by Katica Janeva.

“The evidence provided so far confirms that this is solely a criminal case that should not be politicized or associated with persons from other countries. I emphasize that there is no indication that the illegal funds ended in the hands of domestic or foreign politicians,” Joveski said. (N1, 08/21/2019.)

More direct than the Prosecutor was the President of North Macedonia.

“I expect the charges on everyone involved, regardless of their political role. I insist on the responsibility of all politicians, whether they are in power or in opposition” said Stevo Pendarovski.

The future of the Special Prosecution Office

This affair did not only destroy the illusion of Macedonians about the symbol of a colour revolution and relentless fighter against crime and corruption, trying to unite the country on the path to the EU, but also questioned the future of the Special Prosecutor’s Office as an institution. Foreign Minister Nikola Dimitrov says that, after this affair, there remains a bitter taste in everybody’s mouth.

“What is really important now is that the system is responsive. One person can’t be a reason for a nation to give up and we must continue on the path to the rule of law”, Dimitrov said.

However, the opposition party VMRO-DPMNE, considers the Special Prosecutor’s office as an extension of the Social Democrats and an instrument of the West that caused the party and their former leader Nikola Gruevski to lose the election and sees this affair as an opportunity to shake up the system.

Namely, the opposition VMRO-DMNE has announced that it will not support the proposal of the Special Prosecutor’s Office Act, which regulates the status of this institution and its further operation, which is one of the conditions for opening negotiations with the EU in the autumn 2019. By the way, when it was founded in 2015, the Special Prosecutor’s Office was given a five-year mandate to examine all allegations from wiretap conversations (the “bombs”) published by the then opposition leader Zaev. The bombs pointed out to the criminal acts of members of the then ruling VMRO-DPMNE, Prime Minister Nikola Gruevski and former chief of the secret police Sasha Mialkov. This is the reason why VMRO-DMNE wants to do everything it can to reduce the impact of the Special Prosecution’s Office and make the cases obsolete. The authorities, on the other hand, want the Gruevski-era affairs to get their epilogue, but the “Extortion” affair scandal casts a shadow over the work of the entire Prosecution.

The new law that needs to re-establish the status of the Special Prosecution is in the parliamentary proceedings and the voting is expected to be in mid-September. Passing the law, according to European officials, is one of the conditions for North Macedonia to open negotiations with the EU in October.