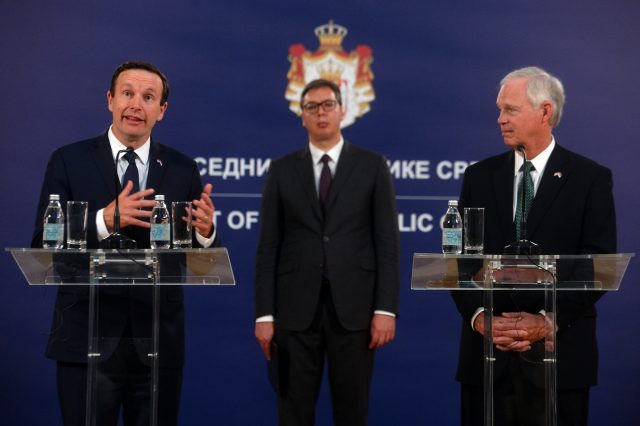 PRISTINA / BELGRADE – US Senators Ron Johnson and Chris Murphy visited Kosovo and Serbia on Thursday and Friday, sending a clear message on the dialogue, and sacrifices required for Kosovo and Belgrade to reach an agreement.

Murphy stated that he had good meetings yesterday in Kosovo. “[I’ve] met with all political parties to encourage domestic reform and progress on dialogue with Serbia,” Murphy wrote on Twitter sharing a photo from the meeting with Kosovo president Hashim Thaçi, Gazeta Express.

Senators Johnson, a Republican from Wisconsin, and Murphy, a Democrat from Connecticut, called on Pristina and Belgrade to resume dialogue after the election in Kosovo, saying that sacrifice is needed for reaching a final agreement between Kosovo and Serbia.

Meeting with the President of Serbia Aleksandar Vučić on Friday, the Senators reiterated their message, adding that both Republicans and Democrats in Congress wish a stronger friendship with Serbia, Tanjug reported.

Vučić stated that he expects the suspension of Kosovo’s tariffs and wishes to reach a compromise, which must not entail the fulfillment of all of the demands of one side, and that the other Serbia does not get anything.

“It should be an agreement in which both sides loose equally so that they could gain an equal amount”, Vučić repeated his opinion on the issue.