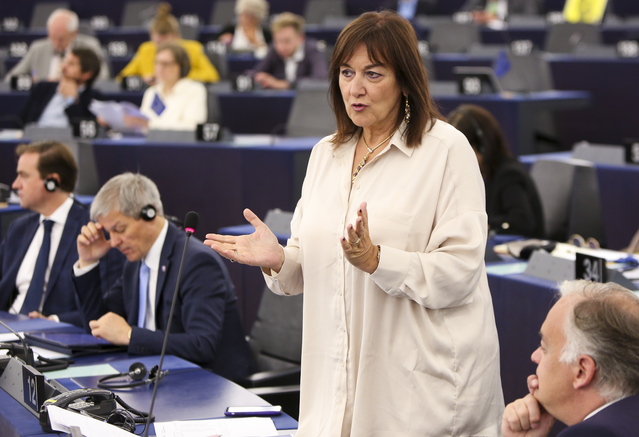 BRUSSELS – According to several sources of the European Western Balkans in Brussels, Dubravka Šuica (EPP), Member of the European Parliament from Croatia, will be nominated for the position of the Enlargement Commissioner in Ursula von der Leyen’s Commission.

The information has not been officially confirmed.

Šuica was nominated by the Government of Croatia as one of the 27 Commissioners in August. Ursula von der Leyen is expected to unveil the list of her Commission’s portfolios on Tuesday.

The Commission will have to be approved by the European Parliament as a whole, following the hearings of each Commissioner-designate in front of the relevant parliamentary committee. It will begin its mandate on 1 November 2019.

Member of the Croatian Democratic Union (HDZ) since 1990, Šuica has served as mayor of Dubrovnik from 2001 to 2009. She has been the Vice President of HDZ.

Since Croatia’s accession to the European Union in 2013, Šuica has been a member of the European Parliament, where she belongs to European People’s Party group, of which HDZ is a member. She became a Vice-President of EPP group after 2019 election.

Since 2014, Šuica has been a member of the European Parliament’s influential Committee on Foreign Affairs (AFET). She was also its Vice-Chair from 2016 to 2019, as well as a member of EP’s Delegation for relations with Bosnia and Herzegovina and Kosovo.

Although she supports the accession of Western Balkan countries to the EU, Bosnia and Herzegovina in particular, Šuica has stated several times that it is unrealistic for Serbia to become a member of the EU by 2025.

According to her statement made in May this year, Serbia needs to submit a list of missing persons and return cultural heritage from the 1990s war, as well as ensure that Croatian national minority in Serbia has the same level of rights as Serbian minority in Croatia.

Before Šuica, position of the Commissioner for Enlargement negotiations was occupied by Johannes Hahn, who get a different portfolio in von der Leyen’s Commission. Throughout the summer it was speculated that both Slovenia and Hungary are inretersted for the Enlargement portfolio.