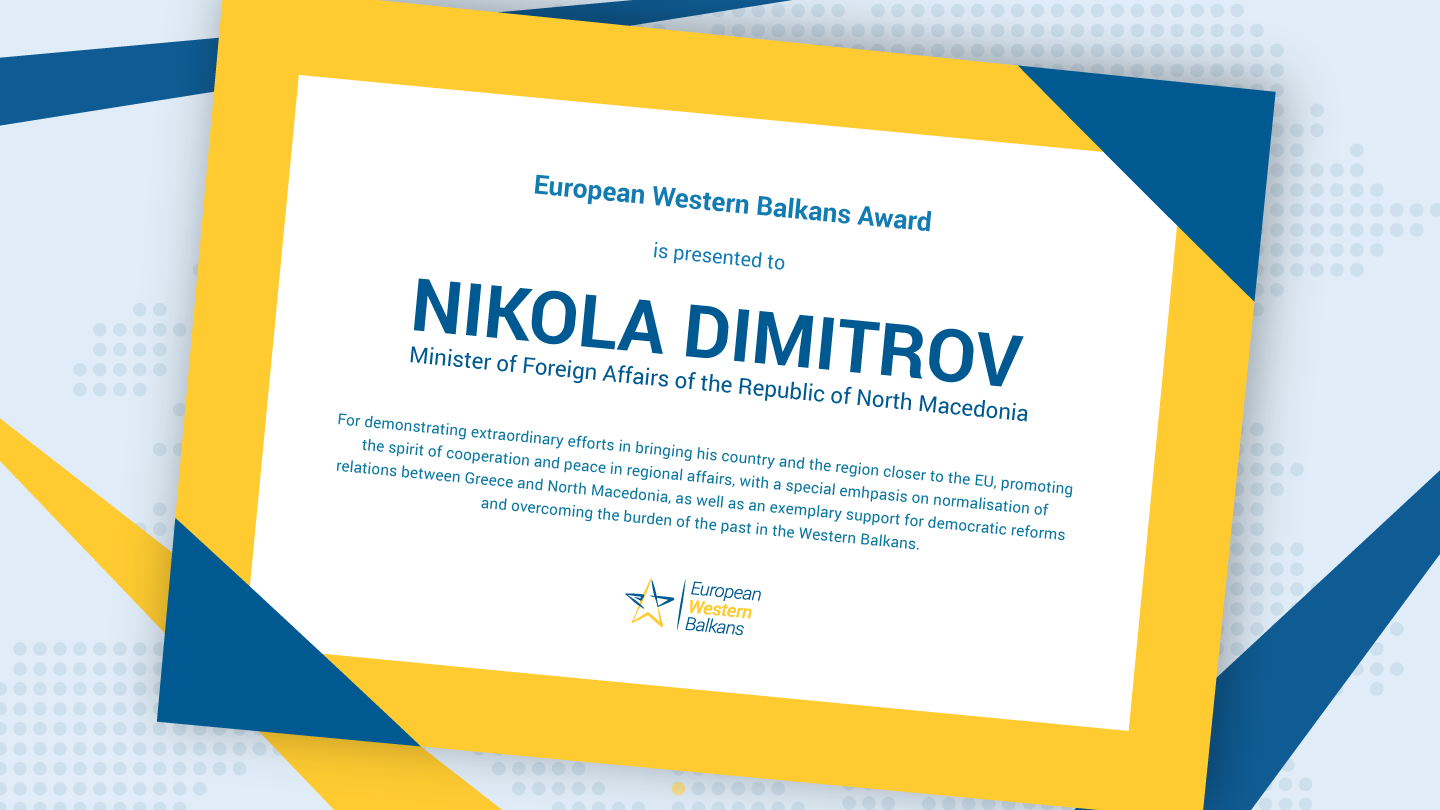 BELGRADE – On the occasion of the fifth anniversary of the European Western Balkans, the portal presents the Award for Contribution to the European Integration of the region to the Minister of Foreign Affairs of North Macedonia, Nikola Dimitrov.

The Award is being presented “for demonstrating extraordinary efforts in bringing his country and the region closer to the EU, promoting the spirit of cooperation and peace in regional affairs, with a special emphasis on normalization of relations between Greece and North Macedonia, as well as an exemplary support for democratic reforms and overcoming the burden of the past in the Western Balkans”.

On this occasion, the Minister of Foreign Affairs of North Macedonia expressed his gratitude for the Award and pointed out that without the European Western Balkans, media scene would not be complete.

“As Europe is not complete without the Western Balkans, so the media scene in the region would not be complete without the European Western Balkans – always present, timely and focused on the things that matter – a shared EU future. Congratulations on the completion of 5 successful years EWB! Let’s boost the transformative process together and celebrate the completion of the European story of the Balkans, the sooner the better!”, stated MFA Nikola Dimitrov.

The Award will be presented to Minister Dimitrov upon his return from official visits to the capitals of the EU Member States.

Nikola Dimitrov became the Minister of Foreign Affairs in the Government of Zoran Zaev two years ago. He is regarded as one of the politicians deserving most credit for the resolution of the multi-decade dispute with Greece over the name of his country, which resulted in the invitation for membership in NATO and the support of Athens for opening accession negotiations with the EU.

He is a professional diplomat, former Ambassador to United States and the Netherlands, and one of the most vocal proponents of the European Integration of the Western Balkans and regional cooperation. In his addresses, he often emphasises how important are good relations between the countries of the region for the EU path.

“The whole region is trying to catch a moving train. It is inconceivable for Macedonia to be a happy and a democratic country without Serbia being the same. We are together in this, and I am glad because of that.” (Vreme, 14.04.2018.)

Before becoming the Minister of Foreign Affairs, Dimitrov was an active member of civil society and a prominent member of the Hague Institute for Global Justice.

This European Western Balkans portal was founded in 2014 to contribute to the availability of information related to the EU in the Western Balkan countries, but also provide the news from the region to Brussels and other member states’ capitals. During these five years, EWB has become one of the most respected and most reliable English news sources in the region, with a strong footing both in the Western Balkans and in Brussels.

Our First Five Years with You

[EWB Interview] Marović: The key preconditions for Montenegro to become the next EU member state are there