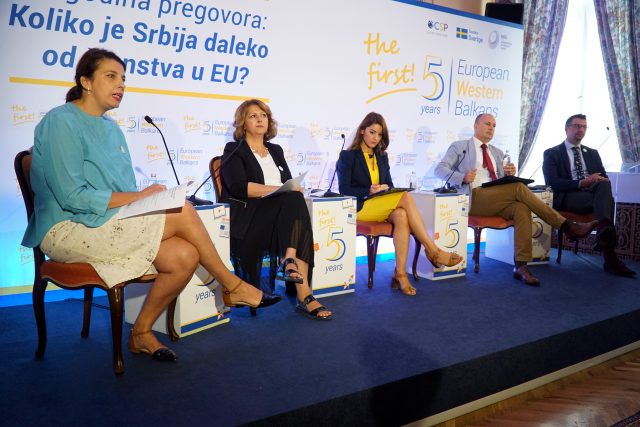 BELGRADE – Serbia has been negotiating with the EU for five and a half years, but it is unlikely that it has passed the half-way mark on its integration path, concluded the participants of the conference “Five Years of Negotiations: How Far is Serbia from EU Membership?”, organised by the European Western Balkans.

“Serbia could technically still become a member by 2025, but that is unrealistic”, stated Srđan Majstorović, President of the Board of the European Policy Centre in Belgrade and BiEPAG member.

He added that the integration process of Serbia will be a hot topic for future researchers, since it has been burdened by hard political issues from the very beginning.

However, despite the existence of such issues, Serbia is also doing poorly when it comes to aligning itself with the EU acquis, Vice-President of the European Movement in Serbia Vladimir Međak pointed out.

“What Kosovo has to do with, for example, Law on General Security of Products, which has not been adopted for years? Serbia will not become a member until it solves the issue of Kosovo, but even then it will not be accepted if it does not meet all criteria. Let us solve everything else first, and then Kosovo at the end”, stated Međak.

He added that the adoption of the EU-related legislature has lost its pace in the past ten years, and that deadlines are increasingly not respected.

Milena Lazarević, Programme Director of the European Policy Centre, also remarked that the EU has begun to notice the lacking of administrative capacities in Serbia’s accession process, which has not been present before.

“The events in the EU that have slowed down Serbia’s accession have arisen long after it became apparent that Serbia itself is slow in implementing necessary reforms”, she added.

Everything said can be summed up in the phrase festina lente (“more haste, less speed”), emphasised Secretary General of the European Movement in Serbia Suzana Grubješić.

According to her, that pace is currently optimal for both Brussels and the Government of Serbia.

“We failed to use the momentum of the enlargement in 2000s”, concluded Grubješić.

The unknown future of Serbia’s democracy

The second panel discussion of the event was dedicated to democracy as one of the key Copenhagen Criteria, failing to spark much optimism.

“Serbia is not a democracy, and we cannot become an EU member if we are not a democracy. Even if we solve the issue of Kosovo, we will find ourselves years behind the EU in this area”, stated political scientist Boban Stojanović.

Executive Editor of the European Western Balkans Nikola Burazer was of the similar opinion, pointing out that, at least, the EU seems to be showing more awareness recently. The evidence for that, he pointed out, can be seen via the fact that only one negotiating chapter has been opened this year, as well as that European Commission’s Report was more harsh than in previous instances.

The topic of boycott of the forthcoming parliamentary elections was brought up frequently during the discussion. In Stojanović’s view, it is the last option that stands a chance of putting the pressure of the current government.

“It will not achieve anything immediately, but it may put off some alarms in the international community, showing that Aleksandar Vučić is not a factor of stability any more”, he said.

President of Belgrade Fund for Political Excellence Sonja Licht agreed that the boycott is a legitimate option, but expressed her concerns over the still largely unknown policies of the opposition parties, stating that they must be made clear, especially their positions on EU integrations, in parallel to the boycott.

That the elections in Serbia are not free and fair was underlined by the findings of the Center for Research, Transparency and Accountability (CRTA), which has monitored election cycles in Serbia for years.

Programme Manager of CRTA Raša Nedeljkov pointed out that the only remaining achievement of 2019 Serbia is the maintenance of peace, which may be compromised by the increasing political polarisation.

The conference also marked another five-year anniversary – that of the launching of the EWB portal. Head of the EU Delegation to Serbia Sem Fabrizi congratulated the organisers during his opening speech, urging them to maintain spirit and professionalism in their work.

Editor-in-Chief of the European Western Balkans Nemanja Todorović Štiplija opened the event with a remark that the portal has organised at least 30 events on various topics of Serbia’s accession negotiations since their launch in 2014, and stressed that the aim of the conference is to find an answer to the question when will the final event leading up to the country’s joining the EU take place.

Key findings of the 2021 European Commission Report on Serbia