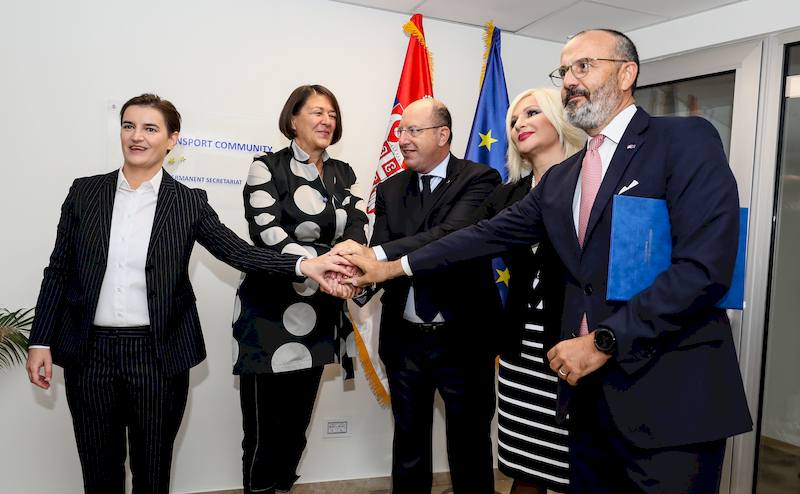 BELGRADE – Permanent Secretariat of the South-East Europe Transport Community was opened today in Belgrade in the presence of Prime Minister of Serbia Ana Brnabić, European Commissioner for Transport Violeta Bulc and Head of the EU Delegation to Serbia Sem Fabrizi.

Founding of the Transport Community was agreed and signed in 2017, in the context of the Berlin Process.

Brnabić stated that it is the first permanent seat of an international community in Serbia.

She said that everybody today is sending an important message that Serbia can cooperate with partners in the region successfully and find the reasons to overcome obstacles and have a better future.

European Commissioner for Transport Violeta Bulc stated that today’s opening of the Secretariat, with the support of the EU in the context of a very sensitive political situation in the region, is a great success.

“For the first time, businessmen in the region will be on a single market. They know what this means very well”, said the Commissioner at a conference “How can the Transport Community benefit from transport and mobility of people in the Western Balkans”.

She remarked that it is very important that the railroad transport will be united across the whole region, but also the EU, which is a great step forwards for the Western Balkans.

Bulc pointed out that the business community will receive quality investors and that the costs of the realisation of the transport projects will be lower than 30 percent.

The railroads will remain the priority for the EU and more than 60% of all investments in transport within the EU will go to that sector, the Commissioner added.

Head of EU Delegation to Serbia Sem Fabrizi said that the Transport Community will not be focusing only on roads, but also railroads, river and sea transport.

“This is a tool for connecting the region with the EU”, stated Fabrizi, adding that the tasks of the community will include technical and security standards and aspects, legislature, environment and other issues.

Fabrizi added that the goal is reaching the EU standards, which are highest in the world.

Ruiz Calavera: No progress on media means no progress in EU accession process

Germany likely to give green light to North Macedonia, Albania may have to wait

Pahor: Western Balkans’ accession to be a priority for the new European Commission