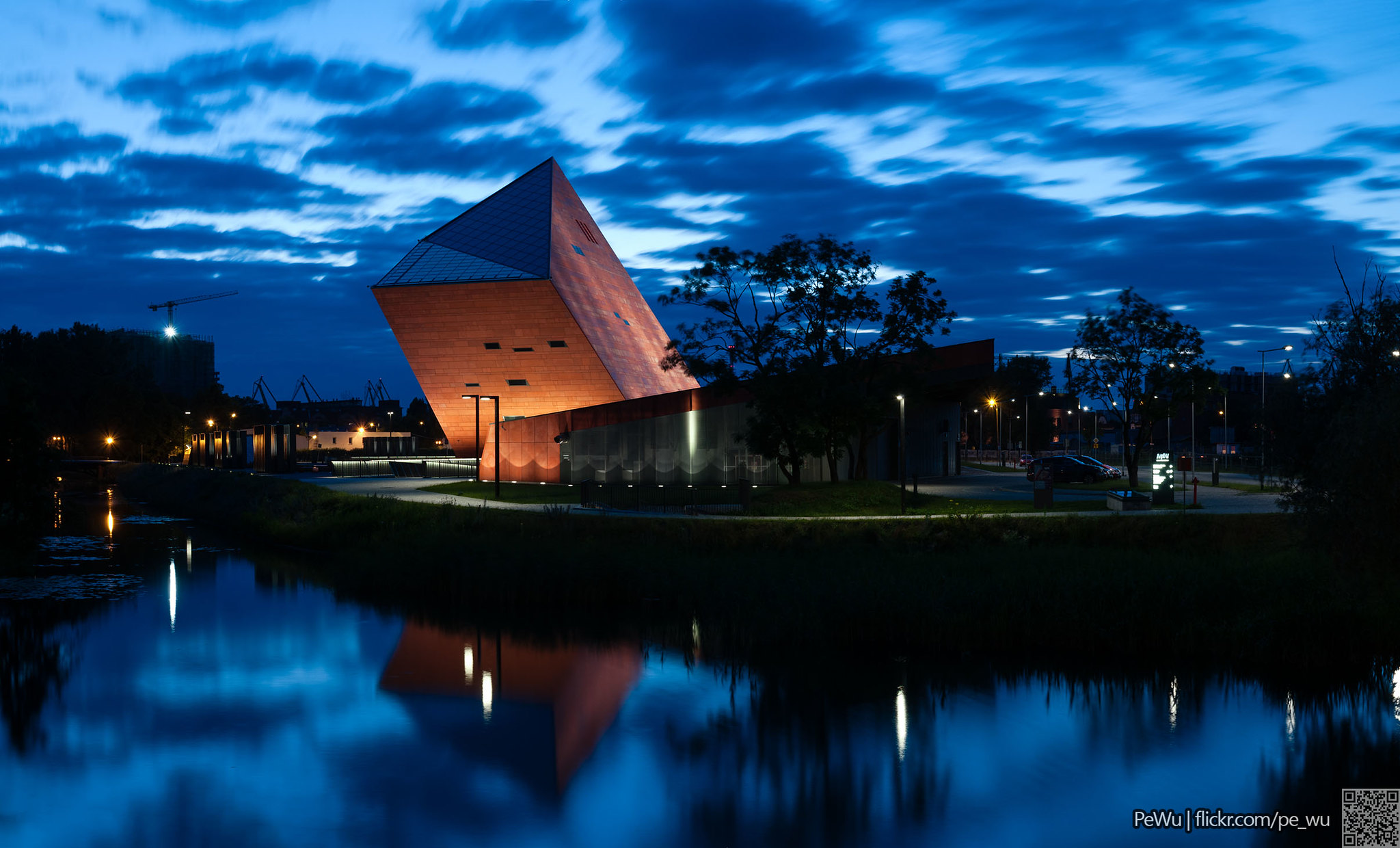 Museum of World War II in Gdańsk, Poland; Photo: Flickr / Pe_Wu
On 1 September 1st, the ceremony marked the 80th anniversary of the outbreak of World War II in the city of Wielun in Central Poland. Very symbolically, along with President Andrzej Duda stood the President of the Federal Republic of Germany, Frank Walter Steinmeier. For this occasion, top officials of the European Union and NATO, their Member States, as well as countries participating in the Eastern Partnership process (which is very important to Poland because it treats its hinterland) were invited. Russia’s absence was announced and expected; but somehow in our region the most attention was caused by the fact that not even the highest officials of Serbia and Bosnia and Herzegovina were invited. Warsaw’s decision was justified by the fact that the two countries mentioned are not members of either NATO or the EU, or participants in the said process: therefore strictly protocol. Why Russia was not invited could be heard in a speech by the Polish President, who warned (Mark Santoro uses the verb “chided” in the New York Times) the present (and absent) statesmen about the dangers of yielding politics: “We are still faced, even in Europe, with the return of imperialist tendencies, attempts to change borders by force, assaults on other states, taking their land, enslaving citizens”. It is, of course, Russia’s incursion into Ukraine, the occupation and annexation of Crimea, and the support this country provides to rebels in eastern Ukraine.

What hurts “us” the most, in addition to the clear and gross omission of the role that Serbs and other nationalities have played in the fight against Nazi Germany and the various collaborative regimes and movements (Serbian President, who has no reason to complicate relations with Poland as an influential EU member and NATO, resorted to term “great revision of history”), is the possibility that Serbia is simply, by the method of association, classified in the same “basket” with Russia. This is not – precisely – because the degree of relations Serbia has with Russia cannot be ascertained for Bosnia and Herzegovina (unless a separate relationship with Republika Srpska is observed, which in media critical to Dodik is called “clientelist”); but it is true that Poland, along with Sweden and the Baltic States, has the most objections to negotiation chapter 31 (foreign, security and defense policy), which in recent years has somehow become no less problematic than the now proverbial 23 and 24.

It seems that the depth of the conflict in which Russia found itself with the West is not sufficiently understood in Belgrade. (Dmitry Trenin points out that relations between Russia and the West have been “taken back” a century.) Since the beginning of the Ukrainian crisis, which – perhaps in the context of the country’s crucial OSCE chairmanship in 2015 – has been estimated to end relatively quickly, “our side” was primarily focused on how rapprochement and alignment with Moscow are viewed in the most influential places in the West. In the “blind corner” remained a number of now important capitals of Central and Eastern Europe, which – rightly or not, the debate is in full swing – scare Moscow. All of them are wondering, and they will be wondering when and if Serbia steps up from membership (which no longer seems so certain, but that is another topic). At the same time, in this conflict, history revisions are one of the weapons – not only does history “adapt” to today’s alliances (as Dubravka Stojanovic points out), but serves to highlight injustice, ungratefulness (liberated) or, at worst, the continuity of aggressive politics (which has its own historical precedent). Official Moscow is by no means helpful – for it, too, remains awfully silent on the real nature and purpose of the Molotov-Ribbentrop Pact, perpetuating the myth that the “Great Patriotic War” has become.

It is hard to imagine Poland changing its foreign policy, that is, defense policy, which is fully committed to deterring Russia; that is, related to the West. (The same can be said for the three Baltic republics.) A month ago (August 9th), official Warsaw warned EU members that some of their activities were understood by Moscow as an attempt to “thaw” relations and that such was “misdirected” policy; especially in the context of mass arrests of Russian citizens (who at the same time protested demanding free elections). For Poland, such a policy is a signal that the Union is ready to discount and “forgive” Russia for the various escalations, and above all the annexation of Crimea; which is a direction that many in the east of the EU fear, aware of the possibility of interpreting it in Moscow as a sign of weakness and some future precedent. After all, the sanctions regime – the EU’s response to Russia’s invasion of Ukraine – has not forced Moscow to yield in the past five years. Even the examples of Strache and Salvini showed that politicians in the power of important EU member states were open to the possibility of being funded by Russian oligarchs – which, according to researchers who discovered those stories, would give Russia access to highest levels of European politics.

Furthermore, Warsaw is gradually cutting all forms of economic cooperation and exchange with Moscow. So the Polish government has decided not to extend the natural gas supply contract, which is in force with Gasprom until 2022. It will follow the example of Lithuania, which did so five years ago. It will meet its natural gas needs in Norway through a pipeline currently under construction in the Baltic Sea; importing (expensive!) liquid petroleum gas from the United States, via a terminal on the border with Germany. At the same time, it will benefit from the transit of this energy product to Ukraine, all with the aim of reducing energy dependence on Russia.

Warsaw’s position becomes even clearer when looking at its role within NATO. Poland here is a state of “critical importance” (Den Gur for “National Interest”). Military planners believe that through its territory (Suwalki Pass), an army must pass, which will stop “some future aggression” by Russia, where NATO is most exposed – in the Baltic States. Poland, along with Lithuania, is the only border with Russia’s excommunicated Kaliningrad, which has deployed significant military capabilities, strengthened after 2014. There is, at last, only the Baltic Sea, where one can imagine some future confrontation as one of the possible areas of operations ( the example of the Georgia war of August 2008, which included limited naval operations on the Black Sea). That is why next year Warsaw is preparing to spend 2.2% of its (constantly growing!) GDP on defense spending, more than the Alliance’s desired but never reached standard – a figure that is particularly sensitive in Washington under Trump. Confirming the growing importance of Poland in the eyes of the United States is the deployment of 4,500 troops of this country on its territory, with thousands more planned.

The declared target is to reach 2.5% by 2030 (from which we read that confrontation with Russia will not be over by then). The Polish defense system is undergoing an accelerated modernization process with the acquisition, primarily, of US weapons (up to 48 F-35 aircraft, Patriot and HMARS missile and air defense systems); as well as the German one (in 2015, 105 used Leopard 2A5 tanks were purchased, while the existing 142 in the older 2A4 version started the modernization process). The armed forces themselves have been increased by a third (from 100 to 130 thousand troops, with plans to have 200,000 by 2025); another, fourth division was erected; and, perhaps the clearest indicator of what they are preparing for in Warsaw, a separate territorial defense (Pol. Wojska Obrony Terytorialnej, WOT) is being developed, with the task of responding to the possibility of a Russian attack from behind the front line.

All of the above points to one policy that will not change in the near future. As difficult as Warsaw’s decision may be, it must be understood somewhere, or properly interpreted. The Poles know well what sacrifices Serbia made in World War II. With increasing cooperation with Russia, Serbia seeks to secure a certain interest (we assume here that it is a complex maneuver aimed at buying time around Kosovo, until some satisfaction appears on the horizon, if it appears), it is long clear, but it is clear at the same time, a “hole” in relations with the West has been dug that will be difficult to extract oneself from. Unless there is a complete change in foreign policy orientation, which at this point seems less likely.