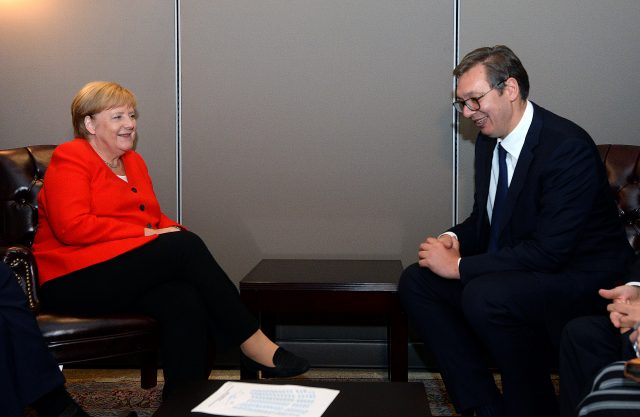 NEW YORK – New steps in the process of normalisation of relations between Belgrade and Pristina will be taken after the government of Kosovo is formed, German Chancellor Angela Merkel and President of Serbia Aleksandar Vučić announced.

“The plan and the idea of French President Emmanuel Macron and German Chancellor Merkel is that a regional meeting should take place and that Serbs and Albanians should begin with a more intensive negotiations”, said Vučić after meeting with German Chancellor on the sidelines of UN General Assembly.

Merkel’s message is “carry on with the talks, until a solution is found”, Vučić stressed.

He announced that Germany wants the long-term stability for the Western Balkans.

“The conversation with Merkel was not only fair, but also good and specific in terms of what the “roadmap” is like and what everything should look like from December, once the new government in Pristina is formed”, Serbian president said.

Merkel reiterated reiterated Kosovo must lift its tariffs on goods from central Serbia.

“When that takes place, I think Merkel’s and French President Emmanuel Macron’s idea and plan is for discussion to be continued quickly, and for a regional conference to be organised, to embark on intensive discussions and dialogue between Serbs and Albanians and try to find a compromise solution,” Vučić concluded.

He also announced that Merkel would visit the country in 2020 before the end of her term.