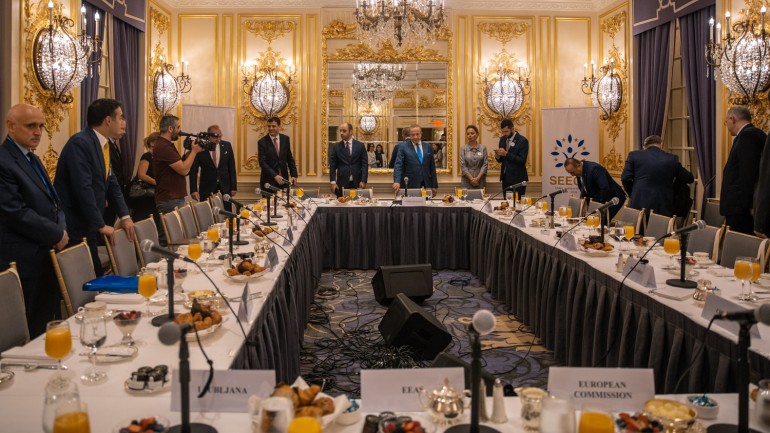 NEW YORK – In addition to the traditional meeting with High Representative during the session of the United Nations General Assembly, Western Balkan leaders used the opportunity discussed political issues with the representatives of United States.

Following the meeting with US State Department officials – Acting Assistant Secretary of European and Eurasian Affairs Philip Reeker and Special Western Balkans envoy Matthew Palmer, President of Serbia Aleksandar Vučić said that Serbia is prepared to return to dialogue after the tariffs on Serbian goods were lifted because it is sincerely advocating reaching a real and sustainable compromise in a resolution of the issue of Kosovo, Tanjug reported.

Vučić and the US officials also discussed the situation in the Western Balkans and agreed peace and stability were substantial for the political and economic progress and the European path of the entire region, a statement released by the presidential press office.

The President of Kosovo Hashim Thaçi also had a meeting with the US State Department official with whom he discussed the recent political developments in his country.

He stressed that the calling of an early election it is quite a normal development, adding that political parties, the institutions of Kosovo, will be committed to form the new Government as soon as possible and to address the urgent needs and challenges of Kosovo, stated the presidential office press release.

He added that political parties, the institutions of Kosovo, will be committed to form the new Government as soon as possible and to address the urgent needs and challenges of Kosovo.

Reeker and Palmer also met with the Minister of Foreign Affairs of North Macedonia. United States is still in the process of ratifying NATO Accession Protocol with the country.

Region Cooperation Council hosted an informal meeting for the Western Balkans Minister of Foreign Affairs on the side-lines of the United Nation General Assembly.

The participants expressed satisfaction over the achievements made in regional cooperation so far, underlining importance of its further strengthening for the specific tasks ahead of the region.

They also stressed importance of opening of the EU accession negotiations with North Macedonia and Albania, reiterating that it would be important not just for them but for the region as a whole.

Continuation of Belgrade-Pristina dialogue was also discussed at the meeting with full support of the region for an agreement that would lead to normalization of their mutual relations.

Meeting of the South-East Europe Cooperation Process Foreign Minister, organised by Kosovo as the presiding country, also took place on the sidelines of the General Assembly.

The priorities of the SEECP presidency were presented during the meeting, as well as the perspectives of this format of regional cooperation.