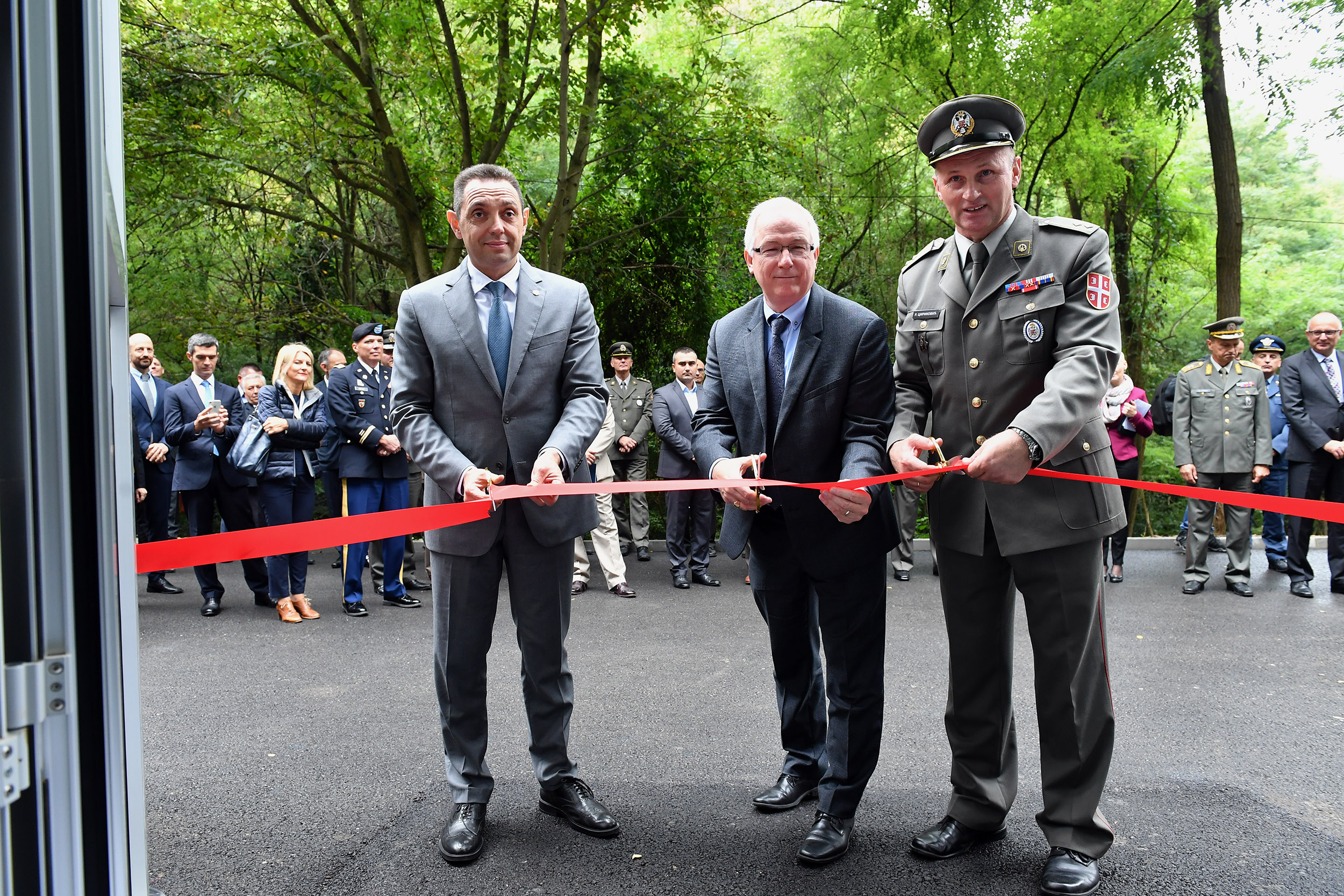 Opening of installations in Kragujevac; Photo: Ministry of Defence of Serbia

The money was provided by the Government of the Republic of Serbia, the NATO Trust Fund and the Technical Overhaul Institute of Kragujevac. Installations will provide extraction of explosive charges from the missile shells and for delaboration, upgrading and maintenance of ordnance.

Aleksandar Vulin pointed out that one part of the project was financed by the Government of Serbia with an amount of 1.6 million euros, while other 900.000 euros were provided by NATO Support and Procurement Agency.

“The NATO Trust Fund and, as its largest donor, the United States Government have done us a great service in helping us make our country safer and to safely destroy the unexploded ordnance and stockpiled ammunition that has been a ballast in our warehouses, but also to extract from it all that is useful to us”, said the Minister of Defense.

Vulin stressed that Serbia will do everything to ensure that, first and foremost, employees working at the Institute and all those working on the delaboration of unexploded ordnance are kept safe. According to him, this is the most optimal way to cooperate with the NATO Trust Fund and with other governments and international organizations.

“These are not endless courses or expert visits that sometimes teach us something and sometimes do not. This is a concrete way to help and a way to make Serbia a safer place”, concluded Vulin.

The High Representative of the NATO Support and Procurement Agency, Daniel Dorrington, said the institution was fully supporting the efforts of the Ministry of Defense and the Technical Overhaul Institute to re-establish the operational capacity of the facility, which is being commissioned today.

“Demilitarization of obsolete ammunition is key to reducing the risk of explosions, and today we are here to confirm our support, and in the months ahead, it is planned to destroy up to 1.300 tons of ammunition in this facility, which will significantly improve safety; and this is a concrete example of what partnership between NATO and Serbia can produce”, said Dorrington, adding that the Kragujevac Technical Repair Institute could become a “regional center of excellence” for the demilitarization of obsolete ammunition.

The British Defense Attaché, Colonel Nick Ilic, underlined the great importance of the initiative for ammunition and ordnance destruction declared to be dangerous, obsolete or redundant by the Ministry of Defense of the Republic of Serbia.

“There is about 1.300 tons of such ammunition selected by the Ministry of Defense, of which about 250 tons have been destroyed so far, so it is an imperative that the Institute will continue with this work as of this autumn”, said the British Defense Attaché and announced that the procedure for approval of additional funds to meet the new needs of the Technical Overhaul Institute in Kragujevac is underway.

“Immediately after the event, NATO Secretary General Stoltenberg said the Alliance would continue to help Serbia safely store ammunition and destroy dangerous surpluses. Accordingly, over the past two years, the United States has donated more than $1.3 million to the NATO Trust Fund for Serbia, Butler said, adding that today’s opening symbolizes efforts by donor countries and the Government of the Republic of Serbia to pursue common interests in combating the threat generated by the accumulation of unsafe and obsolete ammunition”, said Butler.

Director of the Kragujevac Technical Overhaul Institute, Lt. Col. Rasim Ćiriković pointed out that today is a “big day” for the Institute and for the process of maintaining ordnance.

The explosive charge extraction installation is 187 square meters in size. It is an autonomous facility that has its own capacity for the production of water vapor and thermal energy, equipped with a fire alarm system and automatic fire extinguishing.

Trócsányi rejected by EP over personal finances, will not go to the hearings