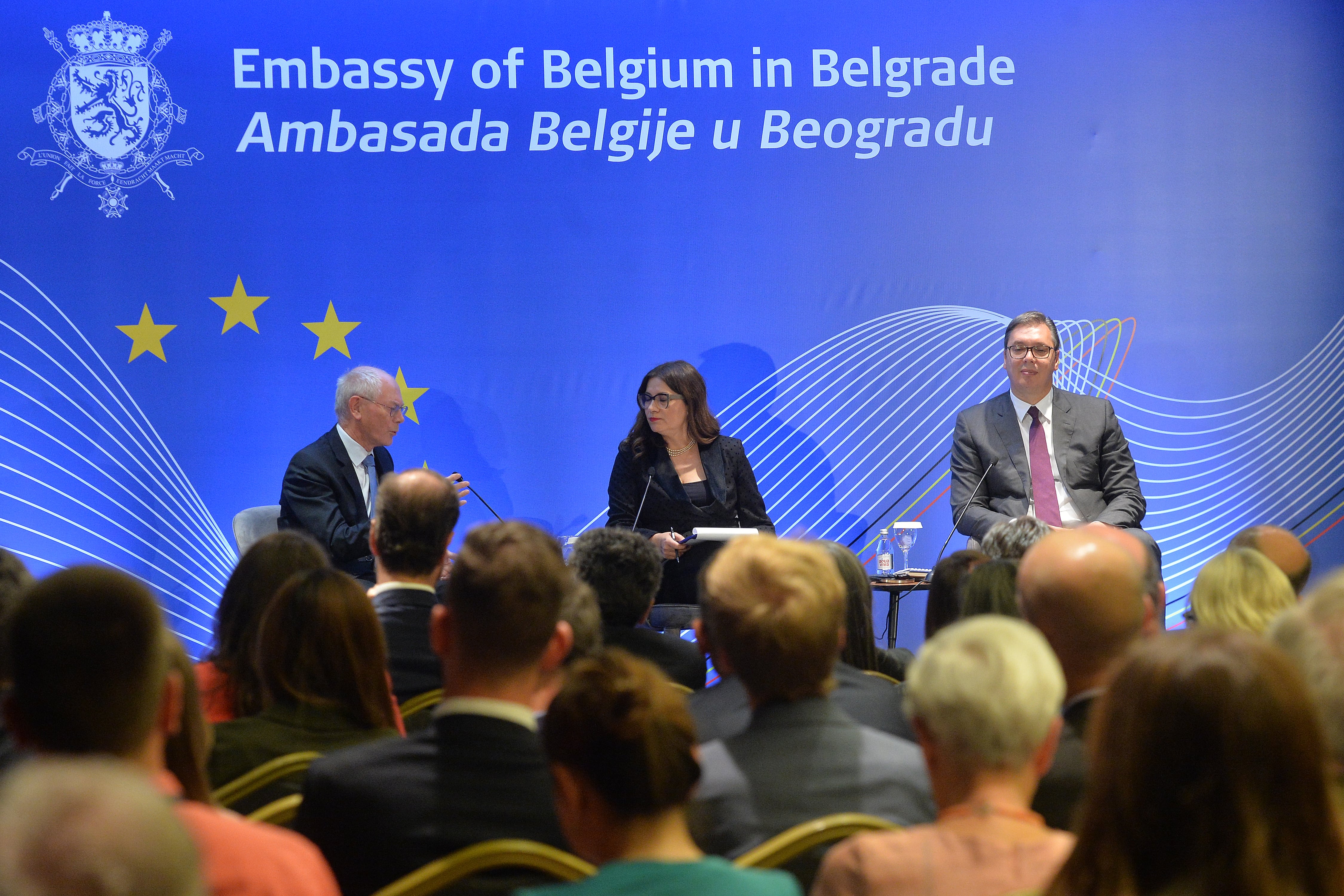 BELGRADE – European Union is valuable for all member states for two reasons: peace and prosperity, and these are also the reasons Serbia should join, said the President Emeritus of the European Council Herman Van Rompuy today in Belgrade.

Speaking at the discussion “The EU and Serbia: Shared Destiny, a Belgian Perspective”, organised by the Belgian Embassy in Serbia, Van Rompuy stated that the shared destiny means the same values and expressed his opinion that Serbia can also share the peace and prosperity of the European Union.

“I really hope that you will become a member state and I am very proud that during my tenure Serbia became a candidate and opened accession negotiations”, stated Van Rompuy.

Also participating in the event, moderated by the Chairwoman of the National Convention on the EU Nataša Dragojlović was the President of Serbia Aleksandar Vučić, who emphasised that Serbia’s rational interest is to join the EU but that there is no excitement about the EU – according to him, the emotions lie with the opponents of EU integration.

“At least half of our citizens would say that the EU is about the recognition of Kosovo. It is not a problem for me, because rationally speaking, I will always be able to promote the EU. It is always better to be in a club than out of the club”, said Vučić, adding that, much like in elections, the struggle for the EU must be won on the emotional level.

However, he stated that there is little encouragement in this area, pointing out that North Macedonia probably will not be rewarded with the opening of accession negotiations for normalising relations with Greece. According to him, Kosovo is a much harder problem, and it is the only issue EU is really focused on.

Van Rompuy agreed that the road to the European Union has many obstacles, but said that all of those are quickly forgotten after reaching the goal, which is still too valuable to be given up on.

“I hope that with the hep from outside, the climate of trust can be restored, so that the normalisation process can be finalised. The ultimate goal is the proseperity of the citizens of Serbia and Kosovo, and prosperity lies not in Ankara, Beijing and Moscow, it lies in Brussels”, said Van Rompuy.

He also added that it is in the interest of Serbia to have as many as friends as possible – including Turkey, China and Russia, but that the added value of all these countries is much smaller than the value of the EU.

“In order to have a lasting peace in this region, European Union is the best guarantee”, said Van Rompuy.

Council without decision on Skopje and Tirana, EU leaders will have the final say

EWB SCREENING / Miroslav Lajčák: There are no deadlines for reaching an agreement between Serbia and Kosovo