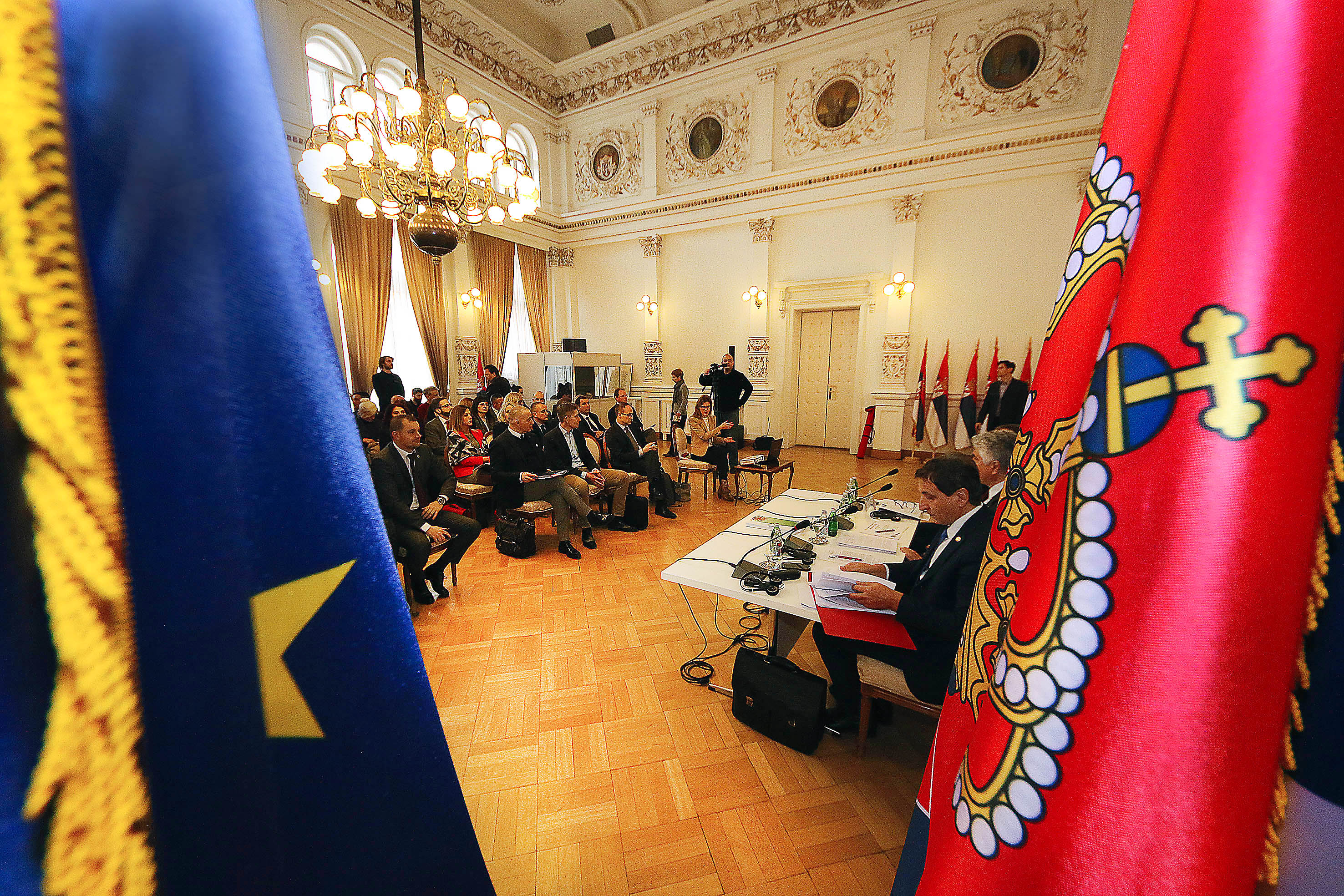 Anti-Serbian traitors and members of the “foreign services” who, by seeking “security-sensitive information,” threaten the national security of the Republic of Serbia, this is how the tabloids, as well as some officials and members of the government, see the non-governmental organizations in Serbia. Despite claiming that Serbia is firmly committed to the European path and EU membership, government officials are not changing their relations with the civil sector, which they consider to be an enemy rather than an ally on this path. On the contrary, they are committed to weakening it and creating their own suitable civil sector.

This is confirmed by the latest 2019 European Commission report on Serbia, which states that no progress has been made in creating a more favourable environment for the development and activities of civil society in the previous period.

“Civil society organisations (CSOs) and human rights defenders continued to raise awareness about civil and political rights. This takes place in an environment not open to criticism, with the authorities making negative statements, echoed by the media, on civil society in general and on funding of certain associations in particular. Harsh criticism against human rights defenders has continued in tabloid newspapers”, it is stated in the European Commission.

Such organizations, at first glance, act like any other civil society organization, aiming to improve the situation in certain areas, such as the independence of the judiciary, human rights or the environment. However, if one takes a closer look at their work and activities, it is evident that there is no public interest on the agenda of such organizations.

The problem of non-governmental organizations closely linked to the authorities is also mentioned in a report on the State of Democracy in Serbia, recently published by the Center for Contemporary Politics.

“There is a noticeable trend of continuation of the so-called governmental non-governmental organizations – critical towards the work of other civil society organizations, but not towards the work of current authorities, whose actions serve to simulate pluralism of opinion on current topics. Such associations are only showing up when the statements support the authorities or condemn the critics of the authorities,” the report reads.

KRIK and project “Raskrikavanje” journalist Marija Vučić points out that the sole task of such organizations is to support the Government and defend the laws and other measures implemented by the government while attacking and attempting to discredit other civil society organizations, and above all those who are critical of the activities of the government and other state instiutions.

“Such organizations regularly stand in defense of controversial legal solutions that should ‘pass’ in the National Assembly and sometimes raise criminal charges against individuals who criticize the government, ‘wash out’ certain officials through their statements, etc. Therefore the goal of such organizations is precisely that – the government through them pushes their interests and shapes public opinion, especially towards the part of the public that may be sceptical, not sufficiently informed, etc. They provide legitimacy for certain solutions, and they also serve to defend those in power from criticism and delegitimize anyone who dares to criticize, of course with white gloves and seemingly civilized and professional manner”, explains Vučić.

Raskrikavanje recently wrote about one such organization and revealed that its founder was businessman Aleksandar Papić, close to Interior Minister Nebojša Stefanović, who, based on BIRN and KRIK writings, was involved with the purchase of the hotel “Šumadija” together with Minister Stefanović’s father. The attention of the journalists of the Raskrikavanje was attracted by the fact that the Center for the Investigation of Corruption (CIC), which is the name of the organization, defends the Ministry of Internal Affairs for years and publishes affirmative texts on the work of Minister Stefanović.

Things became even clearer when the CIC joined last year’s attacks of tabloids and government officials on the Belgrade Center for Security Policy (BCBP), which released a survey saying police were dissatisfied with salaries and pointed at corruption in their ranks. The CIC then, in an unsigned statement, accused the BCBP of being unprofessional and biased.

However, while it was clear in the CIC’s case that they were defending the Ministry of the Interior for years in its investigations and texts, and questioned the relevance of other organizations and researches who point out illicit activities at the top of the Ministry of the Interior, it was not easy to prove direct connection of the authorities with this organization, says Raskrikavanje journalist Marija Vučić.

“In their official, publicly available documents, we could not find any names that we could prove to have links with the authorities until we obtained extracts from Who.is, the international registry of ownership of the sites, from which we found that their founder is a person close to the Minister of Police who shortly after the founding of the association transferred his ownership and never appeared anywhere else,” explains Vučić.

This principle is adopted by most GONGO organizations, and names from official registers and documents can hardly be linked to people from the governing structures, who are actually behind such NGOs. What can certainly help in detecting governmental NGOs is the continuous monitoring of their activities, which will clearly show when those organizations respond, if they defend the government, attack independent journalists and other NGOs, whether they manipulate facts and present incomplete information and whether they point to issues and raise topics of public concern.

However, Raskrikavanje journalist believes that it is sometimes enough to look at whether tabloids close to the authorities are transmitting statements from those organizations who use media space to defend the authorities.

“It seems to the reader that as soon as certain solutions of the government are defended by an (apparently) independent, non-politicized, impartial organization, it must be that those solutions are not so bad. The goal of such organizations is therefore precisely that – the government pushes their interests and shapes public opinion through them, above all to the part of the public that may be skeptical, not sufficiently informed, etc. They provide legitimacy for certain solutions, and they also serve to defend the government from criticism and delegitimize anyone who dares to criticize, of course, all in white gloves and seemingly civilized and professional,” says Vučić, adding that there is a strong link between the tabloids and such NGOs exist because they are on the same mission – to defend power.

All of the above raises the question of who the government want to defend against – its citizens, its reforms, or Brussels. The strengthening and development of the civil sector, as well as the cooperation of the authorities with non-governmental organizations, is necessary for Serbia’s progress towards the EU. This has been repeatedly emphasized in the reports of the European Commission. Brussels also states that, in addition to the existence of the National Convention on the EU, which brings together non-governmental organizations that monitor and control the negotiation process between Serbia and the EU, the government does not cooperate sufficiently with civil society and does not use their expertise.

This is particularly relevant in the context of Chapters 23 and 24 concerning the rule of law, fundamental human rights, freedom of the media and security, and around which there are major disputes between the authorities and the non-governmental sector.

The PrEUgovor coalition, which oversees the implementation of activities under these two chapters, has been warning for years that the government has been “reforming formally, but not substantially”. On the one hand, the civil sector criticizes the breakthrough of reforms and accuses the government that by falsifying report about carried reforms from action plans, the government “feigns” reforms and falsely informs Brussels, while on the other government responds to such allegation by creating parallel, self-governed civil society, which it manages alone.

“The silencing of critical voices is supported by the creation of a parallel civil society – the so-called government-run NGOs. Most of these GONGOs are established as civil society organizations, web portals or institutes, and have such names that will be confusing because they are similar to the names of authentic civil society organizations. They are established and funded to support the views and decisions of the government where it lacks sufficient support, e.g. in connection with the debate on the Constitution”, reads the latest PrEUgovor report.

Thus, during last year’s debate on the constitutional amendments concerning the judiciary, which was met with sharp criticism from the civil sector and professional associations for its proposals, the government decided to support the establishment of new “expert” organizations. Then, in just a few days, new associations of judges and prosecutors appeared, defending the government’s proposals very loudly, saying it was a step towards the independence of the judiciary.

In contrast, other prosecutors’ and judges’ associations, which have existed in Serbia for years, as well as all relevant civil society organizations concerned with judicial independence, said the proposed changes were not good and would undermine, rather than advance, the independence of the justice system. Even the European association “European Judges for Democracy and Liberty – MEDEL”, responded to this case, warning of the establishment of a large number of organizations “whose actions are aimed at justifying and validating the opinion of the government”.

Where did the inspiration come from?

The concept of governmental non-governmental organizations, was not invented in Serbia of course but is familiar to most countries with undemocratic tendencies, where the government wants to “fake” reality, stifle criticism and privatize the state and institutions.

We have already seen a similar scenario in North Macedonia during the rule of Nikola Gruevski, when fictitious civil society organizations were put in the front line of the regime’s defense and served as a democratic facade. This was especially evident during the construction of the monument under the Skopje 2014 project, when a large number of “self-proclaimed” patriotic organizations, founded by members of the ruling party, loudly defended the project, saying it is a project of national importance that strengthens Macedonian identity. In return, these organizations received money from the budget for their activities.

What is perhaps even more interesting than the Macedonian experience, is the fact that the practice of establishing such non-governmental organizations exists in EU member states, among which Hungary and its Prime Minister Viktor Orbán are particularly prominent.

During the migrant crisis, as well as the passage of controversial laws concerning the judiciary and education, which have caused controversy not only in Hungary but throughout the EU and because of which Hungary could have lost the right to vote in the EU, and Viktor Orbán’s party was suspended from the European People’s Party, the Hungarian Prime Minister had behind him an army of newly established non-governmental organizations defending his measures, calling other civil society organizations the agents of George Soros.