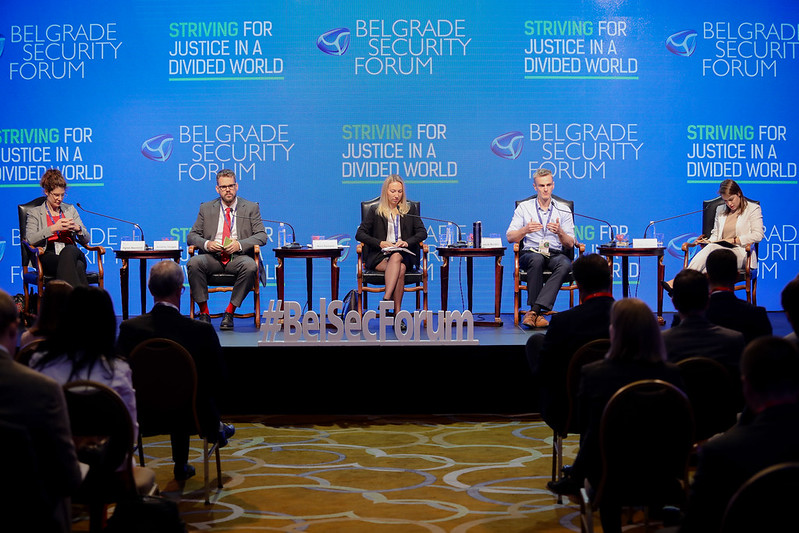 BELGRADE – Chinese initiative Belt and Road can connect the economies of the Western Balkans, but governments of the region and the EU should be careful and have a balanced approach, because China is not here for altruism but for its own interest, emphasized the panelists at the Belgrade Security Forum.

Hana Semanić, Research Fellow at the Center for European Neighborhood Studies (CENS) at Central European University, said that China is no doubt deeply in the region and plans to stay for a long time.

She pointed out that the Western Balkan countries which are not yet part of the EU accept Chinese investment, mainly in infrastructure, telecommunications and other major infrastructure projects.

She emphasized that citizens of the Western Balkans are divided over the question of whether these investments are good or not, and one of the questions is also how long those investments will be in this region.

Semanić gave the example of a large Chinese investment in Montenegro, which could be bad for that country, because Montenegro has borrowed to build a highway, as well as the fact that the public is not sufficiently aware of the possible consequences of this investment.

In addition to Montenegro, it is stated that the same thing is in the case of investment in Bosnia and Herzegovina, where Chinese companies will build a hydroelectric power plant in Tuzla. As in the case of Montenegro, Montenegro, BiH has borrowed for this project, but in these countries there is no independents media that could warn of the potential risks of such investments.

Jacob Mardel, researcher on the Belt and Road from the UK, thinks that Chinese investments and interests are the biggest problem in Serbia, because Serbia invests a lot in infrastructure development, while China has funds to invest.

“China’s political influence is growing in the Western Balkans. The Chinese did not come here because it is too nice here, but the come to make money”, Mardel stated.

“It is a broader vision of connecting economies in the region. One of the key ideas in this process is: if you build a path, you will develop both, economy and investment”, Vangeli pointed out.

Vangeli added that reaching a trade agreement between the U.S. and China would not be favored for Europe, because if China agrees on large imports or exports to the US, it will diminish its interest in expanding into the European market.

The head of the Research Group on Economic Development and Regional Studies at the Hungarian Academy of Sciences, Agnes Szunoma estimated that European countries do not have the same approach to the Belt and Road initiative.

He also said that Hungary is perhaps the most pro-Chinese country in the Visegrad Group.

“We are truly connected with China both politically and economically. On the other hand, within the Visegrad Group, Slovakia is the least connected to Beijing, given that there are no major Chinese investments in the country, and they are the most restrained in this regard”, explained Szunoma.

Referring to Hungary’s experience of cooperation with China, Szunoma said that states in the Western Balkans must be patient.

“You need to know Chinese business philosophy, because if you don’t know it, it will be difficult for you to work with them. Authorities in the Western Balkans should be stubborn as Chinese think long-term about their investments, not just think for five or four years”, she said.

Policy brief: Lack of progress on rule of law will render the enlargement a dead end

WB2EU: Citizens need some re-branding of the idea of what the rule of law is