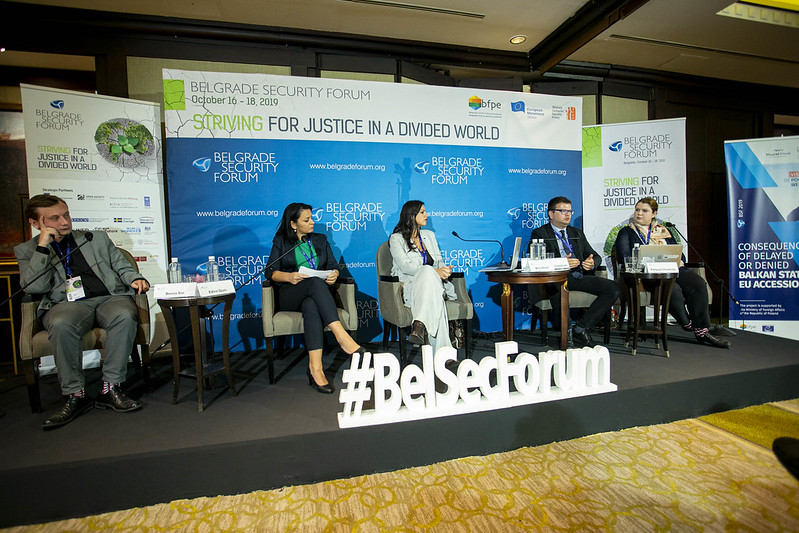 BELGRADE – The European Union has no alternative for the countries of the Western Balkans, which will undoubtedly find it difficult to democratize their societies, establish rule of law and improve the economy, especially after the latest delay of the European integration countries of the Balkans.

Panelists of the session titled “Consequences of Delayed or Denied Balkan States EU Accession” at the Belgrade Security Forum also agree that the consequences of delaying European integration are significant, because this is the biggest reason why people are leaving these countries in a search of conditions for a better life.

Albanian journalist Edlira Gjoni stated that the Western Balkan countries are not like France and Germany and stressed that if they are still kept outside from the EU, they never can become like them.

She said that Albania has problems with corruption and organized crime, but that European integration would surely help in solving them.

„We have not met all the criteria and it is our fault, but it is not easy to be rejected“, Gjoni said, adding that in Albania, percent of the people who believe in the EU is biggest than those who believe in God.

She stressed that Albania does not have a plan B when it comes to the EU alternative.

„US is not an alternative, as many people think, because it is miles away from us,“ Gyoni said.

Professor from the Faculty of Security in Ohrid Zhidas Daskalovski said that the EU is an instrument for democratizing society, for establishing a better market economy, as well as the rule of law.

„The sooner we enter the EU, the better it is for us, but that does not mean that we should not now work alone to have democratic societies,“ Daskalovsky said.

He stressed that at the moment, according to experience, it is difficult for the Western Balkan countries to establish democratization of their societies.

„We see that our elites abuse the process of European integration, so experience says that we have not been able to achieve much by ourselves,“ Daskalovski said, adding that these processes of democratization and rule of law are failing.

Daksalovsky pointed out that it would be good for the EU to help with those processes.

„I believe in the EU, solidarity and that we need to fight. I don’t see any other alternative, we have to work together, EU members, candidates and others. I know that this sounds like a fairy tale, but I believe in that“, Milica Kravić, journalist from Serbia concluded.

Zaev: Snap election should be held as soon as possible