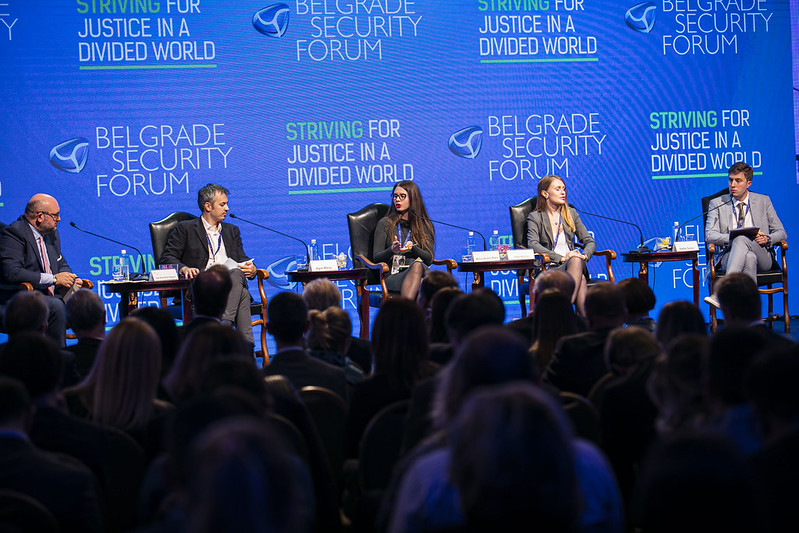 BELGRADE – The lack of tangible EU perspective fort the region of the Western Balkans will affect the Belgrade-Pristina dialogue, panelists at the Belgrade Security Forum on Friday concluded.

Some of the participants of the panel “Belgrade and Pristina – Comprehensive Normalisation”, believe that the win of Albin Kurti in the recent Kosovo election could be an opportunity for a new dialogue despite his usually harsh rhetoric, while others still expect difficulties in that regard, as well as with the international community.

Chairman of the Board of Sbunker from Kosovo Agon Maliqi does not believe that the meeting of President of Serbia Aleksandar Vučić and Kurti, if the latter becomes the Prime Minister, will take place soon.

He believes that the government formation in Pristina will last for some time and that the election campaign in Serbia will start shortly afterwards.

Maliqi does not see a factor that would push the dialogue forward because, as he said, the EU has lost its credibility by denying the opening of negotiations to North Macedonia and Albania, while US is sending mixed messages.

“The West was united later and spoke with a single voice, which is not a case anymore”, he said.

In his opinion, there will be no conflicts in a meeting between Vučić and Kruti because the leader of Vëtevendosje!, as he puts it, does not have a populist tone any more, sounding like “statesman that understands the importance of the moment”.

Journalist Una Hajdari thinks that Kurti will be radically transparent when it comes to negotiations and that he will openly talk about the details of the dialogue.

“I think that this will change EU’s approach to the dialogue as well, because if one side transparently talks about it, it can change the spirit of the dialogue”, Hajdari said.

She expressed her opinion that, until an agreement is reached, there should be a sort of a Marschall Plan for the Western Balkans, so that the investments and better everyday life could remove the threat of nationalism.

Stefan Surlić, Associate Professor at the Faculty of Political Science in Belgrade, said that he hopes both leaders would stop trying to find excuses for talking to each other.

“It is an absurd situation that, when Vučić meets with Thaçi or Kurti, it is presented as an act of patriotism, while if I meet with Agon Maliqi, it is an act of treason”, said Surlić.

He added that the dialogue was unsuccessful because nobody understood its main goal, nor was it properly defined.

“You cannot normalise the relations if one sides talks about borders and other of administrative crossings”, emphasised Surlić.

Journalist of the KoSSev portal Milica Andrić Rakić said that what is happening in Kosovo now reminds of what was happening in Serbia in 2012 and that Kurti could become the new Vučić.

“But I believe Kurti will be unpleasantly surprised when he finds out that he cannot do what he expected and when he properly understands his position”, she said, adding that, since he spent 10 years in the opposition, he is not well familiar with the role of Serbs in the administrative system of Kosovo.