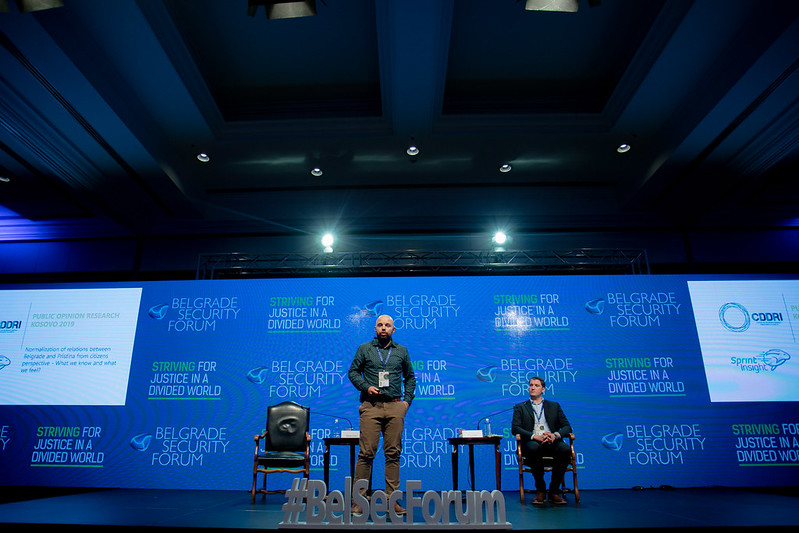 BELGRADE – As much as 83% of citizens of Serbia would not accept an Albanian as a public official of their country, while 82% of them would not accept an Albanian as a family member, show the results of a research conducted by the Center for Social Dialogue and Regional Initiatives and presented at this year’s Belgrade Security Forum. Government-friendly traditional media were found to be a major contributor to the mistrust.

Three quarters of the citizens of Serbia surveyed during September 2019 would not accept an Albanian as a teacher to their children and 68% of them would not work for an Albanian as their superior, the research also shows.

Index of ethnic distance between Serbs and Albanians is 0.62, which is a very large figure, explained researcher Nikola Jović, Associate Professor at the Faculty of Political Science, who presented the findings alongside his colleague Milan Krstić.

Overall, two thirds of the citizens get informed via traditional media, which has been regarded as biased towards the ruling parties. Public broadcaster RTS and private station Pink, both heavily criticized for being influenced by the government, are the usual source of information for 70% of the citizens who watch television.

The sentiments towards Albanians are also reflected by the opinion citizens have on Kosovo and the normalisation process.

Kosovo still regarded as “the heart of Serbia”

Focusing on the dominant narratives around Kosovo, the research has found that 68,5% of citizens agree with the claim that Kosovo is “the heart of Serbia”, a popular slogan of the promoters of Serbian nationalism.

On the other hand, only 18,9% of the citizens regard Kosovo as an independent state eleven and a half years after the government in Pristina declared independence. Almost 70% disagrees with this claim.

When asked why Kosovo should remain the part of Serbia, the most prominent answer is that, if Serbia gives up on Kosovo, the Albanians will take more of its southern territory. This is the opinion of the three quarters of the citizens. In addition, two thirds of them do not want to give up on Kosovo because it is regarded as “our holy land and the cradle of Serbian people”.

However, it seems that a military solution has less support. Only 31% of citizens agree that Kosovo should be “defended by weapons”, while 48% oppose this claim. Additionally, 60% agree that it is more important to protect people than the land.

This can be explained by the prevailing sentiment when it comes to this issue, Jović explained during the presentation. The prevailing emotion people feel when they hear the word “Kosovo” is sadness (28,7%) followed by patriotism/pride (18,6%). Anger, which according to Jović is the primary motivator for action, is the emotion felt by only 5,6%.

This does not mean, however, that the political resolution of the issue will be any easier to achieve, the research shows.

No majority support for any scenario of a comprehensive normalisation agreement

When asked about the potential scenarios for a comprehensive normalisation agreement between Serbia and Kosovo, citizens of Serbia are not inclined to accept any solution in a potential referendum.

The only two scenarios that have more than 30% of support are the one in which Serbia formally recognizes Kosovo in exchange for northern Serb majority municipalities, Association of Serb Municipalities for the rest of Serbs in Kosovo and extraterritoriality for the monasteries of Serbian Orthodox Church (36,4%), as well as the one in which Serbia does not recognize Kosovo’s independence but accepts its UN membership in exchange for the Association of Serb Municipalities (32,6%). Both solutions are, however, opposed by more than 40% of citizens.

All of this makes the maneuvering space of Serbian President Aleksandar Vučić increasingly narrow, especially given the fact that, even though the majority of the citizens of Serbia still support their country’s EU membership, 71% of them would not give up on Kosovo in exchange for becoming an EU member.

A rare positive feature of the research for the supporters of normalisation process is that 55% of citizens support Belgrade-Pristina dialogue. However, President Vučić’s policy towards Kosovo is unfamiliar to 58% of them, which reflects his shifting positioning on the issue, researchers explained.