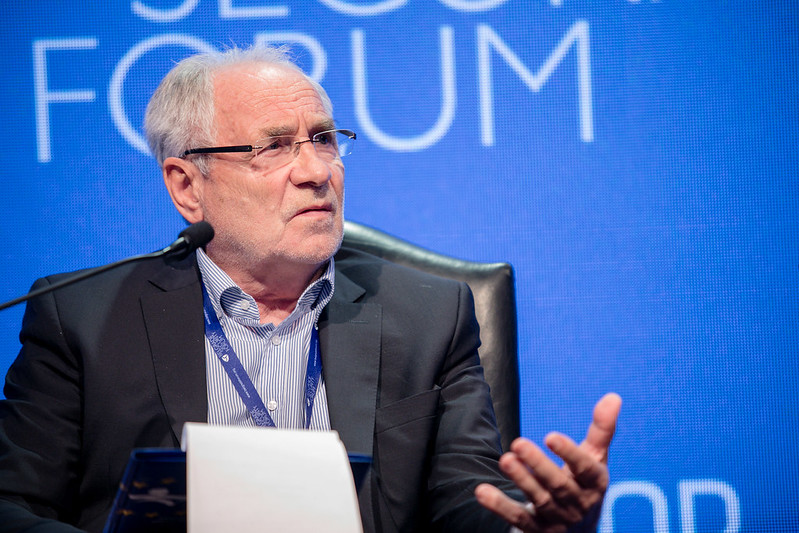 Speaking for European Western Balkans at this year’s Belgrade Security Forum, Vajgl strongly crticised the failure of the European Council to give North Macedonia a date for opening of accession negotiations.

“I would say that this is a deception, plain and simple. I do not think that it is acceptable for any country, even France, to block such a thing against everybody’s wishes and cause an embarrassment of EU”, Vajgl was direct.

He reminded that he is one of the signatories of the proposal that Alexis Tsipras and Zoran Zaev should be rewarded the Nobel Peace Prize. He said that Prespa Agreement is one of the rare positive cases in this part of the world in which such a complicated political problem was solved in an enlightened and democratic manner.

“And now, somebody has thrown that in a bin and discredited the efforts of these statesmen, proving those who are against this kind of agreements right”, Vajgl stated for EWB.

According to him, this sends a bad message to those who are working on similar settlements in the region.

“They will ask themselves: If EU can do it, why can’t we? Credibility of European policy in general is undermined this way”, emphasised Vajgl.

Asked whether European liberals, such as French President Emmanuel Macron and Dutch Prime Minister Mark Rutte are distancing themselves from the Western Balkans, Vajgl, himself a member of the Alliance of Liberals and Democrats in Europe (ALDE) during the previous European Parliament, said that generalisations should be avoided.

“I know that ALDE, which I was a part of for ten years, supports EU enlargement with an absolute majority. It regards it as a strategic goal of Europe, aimed at strengthening its economy and security”, Vajgl stated.

He pointed out that there are several liberal parties in the Netherlands and that only one of them opposes enlargement. He also said that France has historically had reservations towards the enlargement, even before Macron.

“I do not know what Macron’s motives are, and I believe somebody should ask this openly. I do not find his reasoning, that the EU should reform and renew it self first, appropriate. It must be something else, and what it is I do not know. However, it is not liberal”, Vajgl concluded.

Western Balkan Ministers of Foreign Affairs: Pandemic has proven that solidarity is key for removing threats