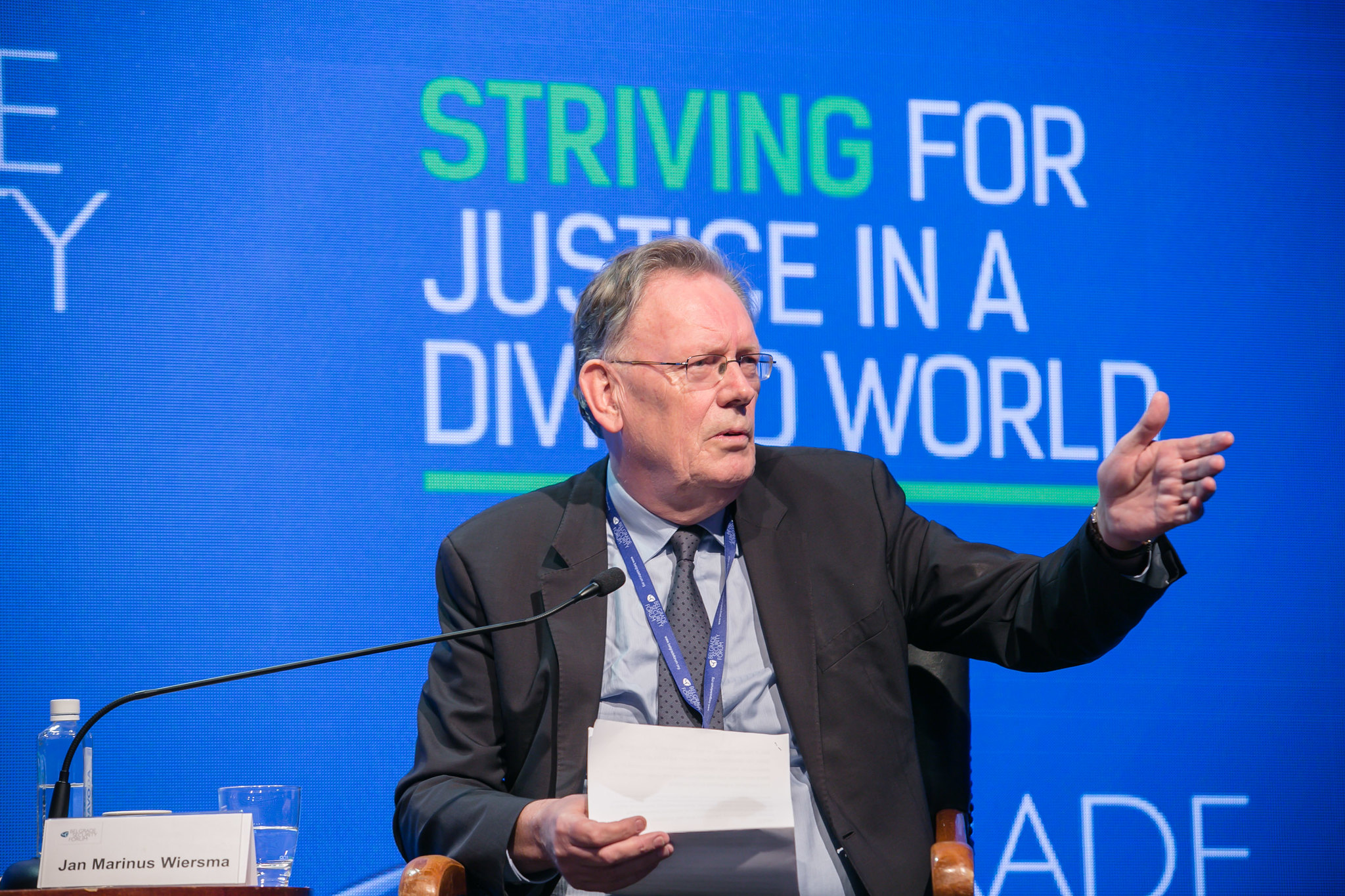 This interview took place on the second day of this year’s Belgrade Security Forum, just a few hours before the session of the European Council that failed to give green light to Albania and North Macedonia. Mr Jan Marinus Wiersma, Senior Visiting Fellow at the Clingendael – Netherlands Institute for International Relations, moderated the panel on justice in a divided world at BSF, while this interview searches for an answer to the question of whether there is justice for the Western Balkans in the divided EU. With a significant experience as a Member of the European Parliament at the time of Big Bang Enlargement, Mr Wiersma also shared his views on the reforms current accession process needs to undertake in order to persuade more sceptical members.

European Western Balkans: Your country, the Netherlands, is known for a stronger opposition to enlargement, in particular the beginning of accession talks with Albania. What are the main arguments of the supporters of this policy?

There is this strange misunderstanding, I think, in the Dutch Parliament, in which the majority considers the start of negotiations as a commitment to membership, that the start of negotiations is already opening the door – which I think is a misconception, because these negotiations are quite serious. They should lead to membership, but it is not guaranteed. It depends on the process which lasts five to ten years, during which you can screen the country and you can invest in the country. You can monitor the situation much better than when you are not negotiating, because once you are negotiating, you get the screening of the European Commission, you get day-to-day monitoring, every member state, including the Netherlands, can intervene in the process and has the veto on every step of the process.

This is why my position has been that if there are problems, especially in the areas of the rule of law and human rights, negotiations should be used to improve the situation. The start of negotiations does not bound the country at all. Take Turkey for an example – there has been much talk, but it will never become a member.

EWB: Is the more Eurosceptic Dutch Parliament the reflection of the higher level of Euroscepticism among the citizens in the Netherlands than in other member states?

JMW: Yes, there rise and the success of a number of populist Eurosceptic parties both on the left and on the right, and this impacts the positioning of the traditional parties. These are mainly Christian Democrats and the Conservative Liberals, who have somewhat Eurosceptic approach even though the Prime Minister Mark Rutte is quite pro-European. And then you have the liberals – D66, Social Democrats and the Greens, they are more open – at least I know that that the Greens and the Social Democrats supported both North Macedonia and Albania.

EWB: But is the issue of opening of accession negotiations with North Macedonia and Albania out in the public, is it discussed among the citizens at all?

JMW: If you ask the people “Should we further enlarge the EU?”, the majority would say no – but they think about Turkey. Nobody made a problem when, for example, Montenegro joined NATO in 2017. Nobody made an issue about it. When Croatia joined in 2013, it was not a big issue either. It is basically about the idea of a country like Turkey.

Of course, the added argument now, and this is also what I think is playing a role in the motivation of President Macron, is that we do not want to take in countries that then start to behave like Orban in Hungary or Kaczynski in Poland. That is an additional fear – accepting two or three countries that might have a disturbing influence. And if you take a look at the role of President Vučić here in Serbia, he is somewhat authoritarian, Đukanović in Montengro as well. Edi Rama is also a “big boss” in Albania, and I think Zaev has a somewhat different profile. So I understand that there is a certain hesitation to accept this kind of leaders in the EU, where we already have problems.

I personally think that it is something that you can control by being strict. I am in favour of introducing a monitoring system on democracy and the rule of law after the countries have joined the EU. That would apply on all countries – the Netherlands and Sweden as well. I am very much in favour of that. The EU has made a big mistake by allowing countries to join in 2004, 2007 and 2013 without being completely sure that these foundations were strong enough and if the leadership was respecting the rules of democracy, both formal and informal.

EWB: On that, the current French policy is that the enlargement process should be reformed, because, according to them, it is not delivering. Do you agree that process itself needs changes?

That is the one thing we should do, the monitoring and screening needs to be improved. Also, maybe there should be more investment that should lead to the democracy and rule of law as a social dimension. I am in favour of the negative – the screening, the control, the monitoring, and of the positive, which is the investment.

I would also be in favour of a “test membership” – a country becoming a member state, and then having another test in two years. Maybe for the first two years it does not have the voting rights, but it can fully participate in all the meetings and events. This would encourage the more sceptical countries such as France.

EWB: What do you think will happen if the European Council reaches the decision today not to open accession negotiations either with Albania or North Macedonia? Do you think that there would be consequences for the reform efforts?

JMW: I would be careful on this point – you should not do reforms for Brussels. I always said that when I was the Rapporteur for the accession of Slovakia: do not reform for the Brussels, do it because it will make your country better. You could become like the Netherland, rich and democratic and everything else. I hate politicians here who say “because they do not offer us negotiations, we will slow down reforms”. Nonsense! That is not fair.

EWB: So what would you say is the strongest argument for opening negotiations now?

JMW: For me, it is taking steps that would make certain processes irreversible. In this case, these are economic transformation, democratic transition, rule of law, but also what I call “informal democracy” – not the “winner takes all” mentality of Vučić, but also the respect for opposition, minorities and others. This is what I want for the countries of the region. That contributes to the stability of the whole, and would at least make it very difficult to return to the situation that we had here in the nineties.

Europeans made big mistakes in the nineties with the region. And in the end, we needed Americans to solve it, we need to bomb Serb positions around Sarajevo, and then Belgrade to find solutions for these issues. Because we failed then, the least we should do is not create a situation in which this could be repeated. There is an element of stability which could be best achieved if you link these countries to the European Union – or at least have the process of linking them. I am quite sure that Vučić’s room for maneuvering is limited due to the fact that he has to take into account what they say in Brussels, not only in Moscow. It would also maybe help Edi Rama to go the right way if he is screened and followed and monitored all the time and has to send reports back to Brussels.

EWB: We have seen in the past few weeks that the EU has tried to mediate the talks between government and opposition in Serbia. The situation is also difficult across the region, in Montengro, Albania and other countries. As a former member of the European Parliament, do you think that EP should take an even more active role in the region as a mediator or should the parties in the region solve the problems themselves?

JMW: Politicians in Serbia, Albania and other countries should ask themselves – do we want to continue with this kind of polarisation? It is not very good for the country, it also does not convince Brussels to start negotiations. All these boycotts of parliaments, the situation in which only half of the people participate in the elections – I think that this is not a good situation and that the EU should be critical of this.

I think that the EP can play a role in parliamentary boycotts – that happened in Macedonia. Here you have parliamentarians talking to parliamentarians. We have these cooperation mechanisms – I was a chair of EP Delegation for Ukraine, Moldova and Belarus in the past, and it was a very useful forum for contact and also a platform that you can maybe use.

Boycott of parliament is not a good situation. I always advise people not to boycott parliaments, it is the last thing they should do. So, maybe there is a role for European Parliamentarians to convey this message and find formulas in which these boycotts can be resolved.