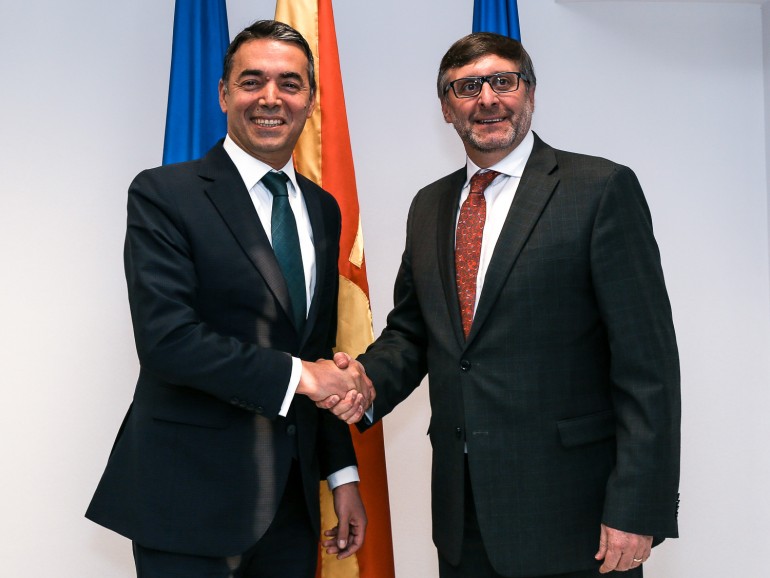 SKOPJE – Foreign Minister of North Macedonia Nikola Dimitrov met today with the Special Representative of the US Secretary of State for the Western Balkans, Matthew Palmer.

Dimitrov and Palmer exchanged views on bilateral relations, characterized as friendly and extremely firm. Macedonian integration into NATO and the EU, the reform agenda, as well as the current political developments in the region were also part of the talks. The recent visit of Secretary of State Mike Pompeo was assessed as further confirmation of the strategic partnership, the mutual interest in continued political dialogue and the further promotion of overall cooperation.

Minister Dimitrov thanked for the continued support by the United States both bilaterally and towards the realization of the long-standing aspirations of North Macedonia for full membership in NATO and the European Union. In this context, he thanked for the recent ratification of the Northern Macedonia Accession Protocol to NATO by the US Senate.

“Ratification undoubtedly marks a step closer to full membership, contributing to achieving long-term stability and prosperity for the country and the region, and strengthening the trans-Atlantic relationship”, Dimitrov said.

The interlocutors agreed that the commitment of the reform agenda, especially in the area of rule of law and the fight against corruption, is the real answer to the existing challenges.