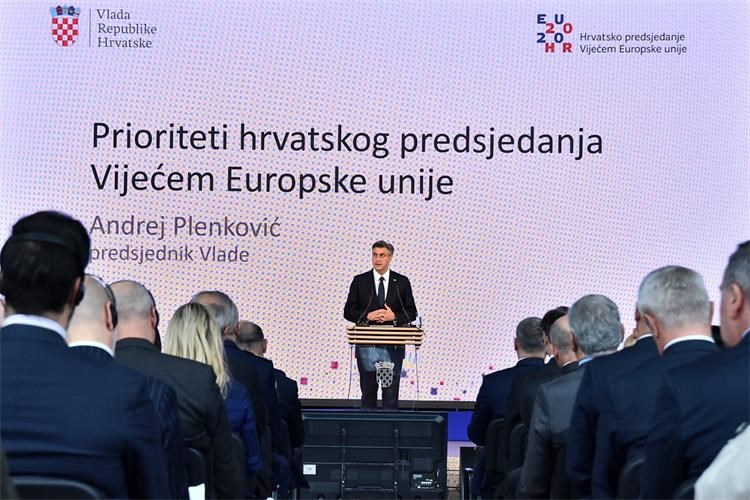 ZAGREB – Europe that develops, protects, connects and is influential will be the four key priorities of Croatian 2020 Presidency over the Council of the European Union, Prime Minister of Croatia Andrej Plenković announced yesterday.

According to Plenković, adoption of the Multiannual Financial Framework, full implementation of European Pillar of Social Rights, beginning of the serious work on reverting negative demographic trends in Europe, strengthening the Security and Justice Area, meeting with the countries of the Western Balkans in May, protection of the environment and fight against climate change will be the most important events of Croatian Presidency of the Council of the European Union, which will last from January to June 2020.

He stated that the EU has a special responsibility towards its closest neighbourhood.

“We believe that we should guarantee the well-being and stability of our immediate neighbourhood in South Eastern Europe, motivating its reform processes”, Plenković said.

He added that Croatia will be committed to an effective enlargement policy, based on a confirmed European perspective of candidates and potential candidates with full respect to the established criteria.

“This is why we have chosen to be the host of the Summit between EU leaders and our neighbourhood, the Western Balkan countries. It will be exactly 20 years after Zagreb Summit in 2000 which was a turning point on the European path of Croatia. This is why we want this Summit to be a reference point for our neighbours and their European path throughout the whole forthcoming decade”, Plenković said.

Other priorities of Croatian Presidency will include improving the competitiveness of EU, lowering of economic differences between EU member states, improving Europe’s infrastructure, energy and digital network, tighter cooperation in the fight against organised crime, protection of European freedom and democracy, as well as privacy and personal data.