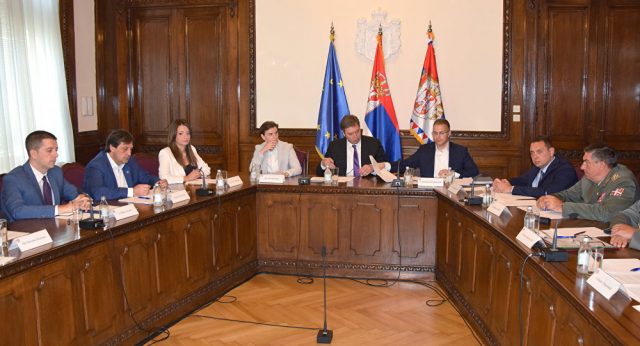 Meeting of the National Security Council of Serbia; Photo: Presidency of Serbia

BELGRADE – Two documents of great importance for national security, defense and long-term foreign policy positioning of Serbia are in the procedure of the National Assembly of Serbia since August 2019 – the draft versions of the National Security Strategy and the Strategy of Defence.

These two documents can be regarded as the „ID card“ of Serbia’s foreign and security policy because they reflect the goals and values that political community seeks to achieve and protect, as well as the means it uses to that end.

For the first time in its strategic documents, Serbia formalized the concept of “military neutrality”, previously proclaimed in Resolution of the National Assembly on the Protection of the Sovereignty, Territorial Integrity and Constitutional Order of the Republic of Serbia (2007). Serbia decided to base its strategic concept of defence on the model of the “total defence”, which encompasses military and civil defence and it is planned and organized in war, peace and emergency situation by using its own strengths and capabilities, as indicated in Chapter 4 of the Defense Strategy.

Due to these novelties, but also taking into consideration Serbia’s efforts to find “its place under the sun”, one of the important questions that arise is how will the cooperation with the North Atlantic Treaty Organization (NATO) and The Collective Security Treaty Organization (CSTO) develop in the future and what tendencies can be observed.

Strategies do not bring about any dramatic change

For Marko Savković, Program Director of the Belgrade Fund for Political Excellence (BFPE), the strategy proposals do not bring dramatic changes in relations of Serbia with the NATO and CSTO because, as he states, while the European perspective is stagnating, Belgrade’s opportunistic policy will continue.

“I expect Serbia to remain an observer country in the CSTO, because joining this organization would mean abandoning the policy of military neutrality. Serbia has no reason to confront the West if it is already, in some way, moving away from EU membership. Besides that, the policy of military neutrality is, according to some studies, supported by 70% of citizens”, Savković says for EWB.

Igor Novaković, Director of Research Department at the Center for International and Security Affairs (ISAC Fund), states that the direction of Serbia’s policy towards NATO and the CSTO cannot be clearly identified, but that there are some determinants of the trends nonetheless.

“Serbia remains committed to the Partnership for Peace (PfP), as a satisfactory framework for relations with NATO, which is clearly in line with the previous period. However, there is no impression that there is an intention to deepen the partnership – similar to the model of relations that exists between Sweden or Finland with NATO”, said Novaković, adding that it is clear that Serbia is aiming at deepening its relations with the CSTO in the future.

By reading the strategies, Milan Igrutinović, researcher at the Institute for European Studies (IES), gets the impression that relations with NATO will be maintained at the existing level, while relations with the CSTO and in the narrow sense with Russia will be “expanded and improved”, as proclaimed in the strategies.

“In practice, relations with Russia and the CSTO have strengthened since Serbia gained the observer status in CSTO, with the increase in the number and type of military exercises and the participation of the Permanent Delegation of the National Assembly to the sessions of the CSTO Parliamentary Assembly since 2016”, he points out.

Igrutinović also explains that the development of relations with Russia can be interpreted in two ways. On the one hand, there is the development of military relations, which has been a prominent feature of Serbia’s foreign policy since 2012, and on the other hand, he points out at the vision of military neutrality, promoted in order to expand the field of cooperation with a number of foreign actors, including military exercises and procurement of military equipment.

What are relations of Serbia with NATO and CSTO?

It is important to note that the wording of the Defense Strategy proposal defining the relationship with NATO and the CSTO has also attracted the attention of the experts. The Strategy states that Serbia “intends in the common interest to enhance political dialogue and practical cooperation with NATO”, while the “determination of Serbia is to extend and enhance cooperation with the Collective Security Treaty Organization as well as with its Member States” is also stipulated.

“Serbia is surrounded by NATO member states, our main partners belong to this alliance and the security of our country depends directly on NATO,” Novaković explains, stating that cooperation with the CSTO is not necessary and does not arise from immediate security interests, unless we use the broadest interpretation concerning the cooperation with Russia in relation to Kosovo.

On the other hand, for Savković, the wording in the strategy is an expression of the desire to equalize the level of cooperation with the CSTO on a practical level with that of NATO, since the Serbian Armed Forces and the Ministry of Defense carry out significantly more activities with NATO than the CSTO.

“The important point is that the CSTO does not have a program like the Partnership for Peace in which Serbia could participate, even though the Individual Partnership Plan (IPAP) is late,” Savkovic stated for EWB (new IPAP was adopted by the Government of Serbia in the meantime).

He stressed that an increased number of military exercises is one way in which Serbia could equate practical cooperation, which may cause dissatisfaction in the West, but in the context of a questionable European perspective, it will not unduly disturb official Belgrade.

Igrutinović believes that Serbia’s cooperation with NATO and CSTO will be fragmented, i.e. Serbia will opt for cooperation on narrower topics where it finds suitable.

“Last year, a large military exercise with NATO “Serbia 2018” was organized to address the consequences of emergency situations (related to the so-called Third Mission of the Serbian Armed Forces), while at the end of October this year, a large military exercise of the Air Defense with Russia “Slavic Shield” was organized, with likely procurement of anti-aircraft missile system “Pantsir S1”. So, it is a matter of “choosing” cooperation options, which partly reflects the technical capabilities and needs of the military, but above all it is a consequence of the country’s broader (foreign) policy, with military neutrality being equated with “non-determination” for anyone in particular, or “opting for everyone a bit”, explains Igrutinović.

Experts we talked to agree that the strategies have numerous shortcomings ranging from communicability to the essential formulations.

As important deficiency, Novaković points out that the formulations in the strategies needed to take into account the fact that these are communication documents read by the partners of Serbia.

“Certainly, that includes sections on cooperation with military alliances as well. On the other hand, I think that the opportunity to adequately explain what military neutrality is or what it entails is a missed, since we only have a hint of what it does not prevent”, Novaković explains.

Savković believes that strategies suffer from inconsistent language, too many non-ranked priorities, and that the very tone of the strategies is problematic.

“There is an impression that the country is endangered from all sides, and it is not clear why is that the case or who threatens it,“ Savković said for EWB.

On the other hand, Igrutinović believes that strategies have significant drawbacks. He stated that the strategies do not offer a clearer picture of the state’s security and defense steps and give the impression of a “supermarket” strategy – there is something for everyone.

“The strategies do not identify the elements of conflict between the EU/NATO/US on the one side and Russia (and therefore the CSTO) on the other, which means that Serbia does not pay attention to that conflict potential and does not offer its position on it. It seems that the aim was to keep certain room for maneuver in accordance with the logic of the moment”, Igrutinovic said.

Although there are numerous deficiencies with the strategies, as it was pointed out, it is important to say that the strategies envisage the development of action plans for their implementation. Monitoring the implementation of the action plans by civil society organizations, interested public and relevant committees of the National Assembly of the Republic of Serbia leaves the possibility that some deficiencies, with the goodwill of the Government to take suggestions into account, may be corrected during the implementation itself.

No Stick, No Carrot