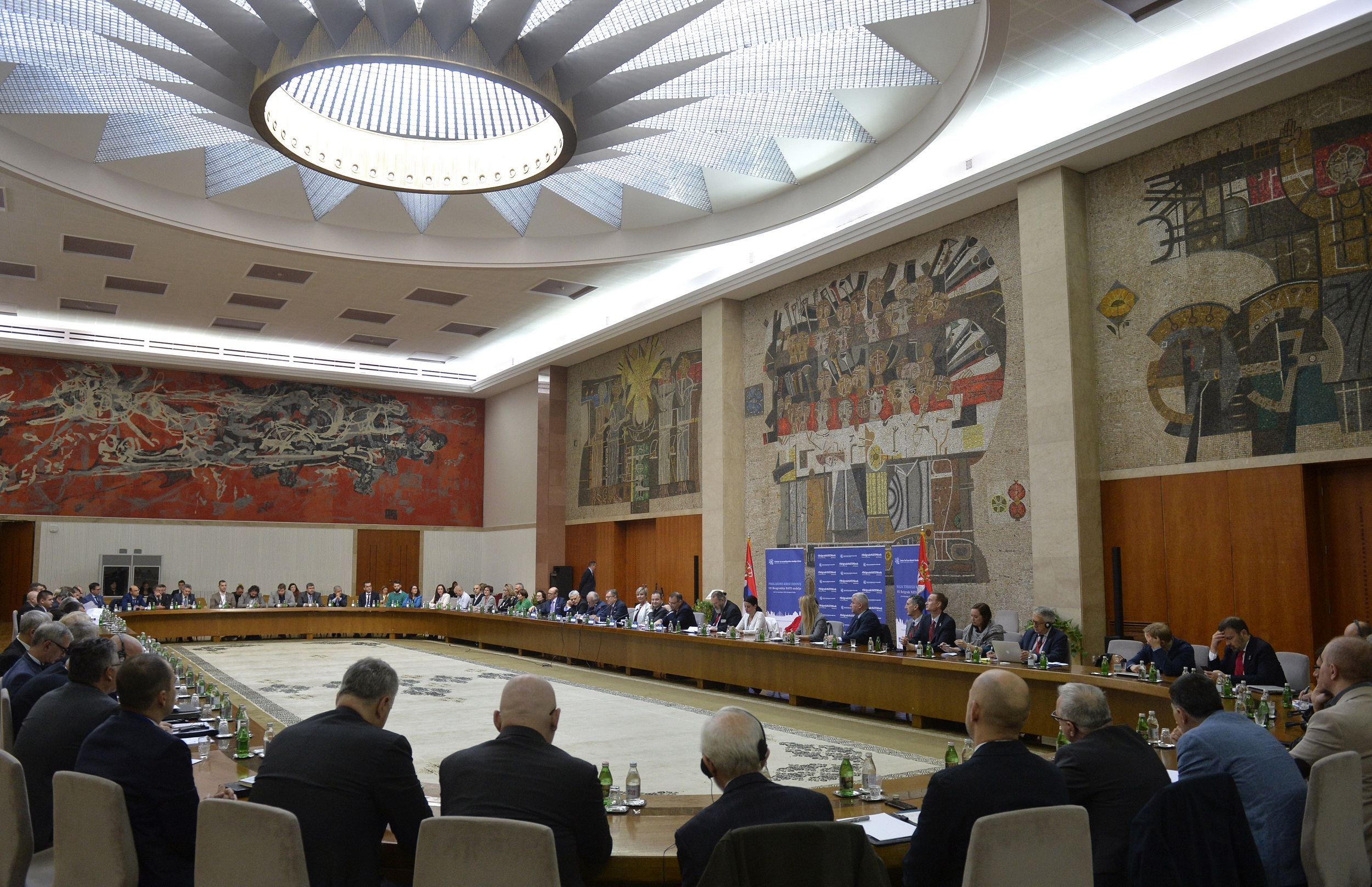 BELGRADE – Cooperation between Serbia and NATO is becoming better, as evidenced by the Government of Serbia’s adoption of the Individual Partnership Action Plan (IPAP) last week. There are high expectations from the Leaders meeting in London, it was stated during the first day of the Seventh Belgrade NATO Week, organized by the Center for Euro-Atlantic Studies in Palace of Serbia.

In the opening statement, Jelena Milić, Director of the Center for Euro-Atlantic Studies, said that the topics of this year’s NATO Week were inspired by the work of artist Marina Abramović.

She said that with the fall of the Berlin Wall, NATO reached out to all countries of Eastern and Central Europe, and also added that this year marked the 20th anniversary of the bombing of FR Yugoslavia, which should never happen again.

Speaking about Serbia-NATO cooperation, she said it was good that the IPAP of Serbia and NATO for the period 2019-2021 was adopted. It is very important that in recent years Serbia has strengthened its cooperation with many NATO members from Eastern and Central Europe.

Tacan Ildem, NATO Assistant Secretary General for Public Diplomacy, also addressed those present at the inaugural part of the conference. He said that NATO is cooperating intensively with all partners in the Balkans, and a conference like this one is a testament to that cooperation.

“The policies of our nations and our organizations do not exist in a vacuum. These policies affect the everyday lives of our citizens and it is very important that everyone is involved in the decision-making process on these important issues”, said Idem.

He said that there were those who have doubt in the international community.

“There are those who want to think that the international community is a dream. Those who would like to saw our partnership, who want us to fear one another and isolate us. This is cynical rhetoric. When we engage in a serious and open-minded debate together, we push ourselves away from this force of discord”, Ildem told all those present.

Ildem also said that one might wonder if NATO has a hidden agenda for the Western Balkans, but the truth is that NATO wants a peaceful, stable and prosperous Western Balkans. NATO is very committed to cooperating with its partners and as a result, NATO will never pressure Serbia to join the organization.

“We realize that NATO remains a somewhat controversial topic in Serbia. The memories of 1999 are still painful. The campaign has never been directed against the Serb population and each loss is a tragedy. We must never forget the past, but we can move beyond it”, concluded Ildem, reminding attendees that Secretary General Jens Stoltenberg and NATO himself have regretted the loss of life on several occasions in the past.

In his opening address, the Serbian Foreign Minister, Ivica Dačić, also said that the metaphor of passing through walls is very topical, provocative and reflects reality.

“Serbia is trying to overcome barriers and walls and to remove them. Our goal is to be forward-looking and to address issues of the past while protecting our national interests”, said Dačić.

Dačić described relations between Serbia and NATO as very delicate because of the 1999 bombing. He emphasized that cooperation with this organization is based on clear admixtures with the presence of military neutrality and without pressure for Serbia to join NATO.

He also referred to IPAP and said that the new IPAP represents the continuity of the first one and therefore many activities can be found from it because of their longevity.

“Particularly important segment of cooperation with NATO is cooperation in Kosovo under resolution 1244 and the Military Technical Agreement. We believe that only a compromise solution achieved through the Belgrade-Pristina dialogue, can ensure lasting peace and stability”, said Dačić.

He concluded that there was no reason why a third party would have a problem with something the two sides agreed on.

There needs to be clever defence budgeting

Tacan Ildem was also a participant in the first panel addressing the NATO Leaders Meeting in London in December.

“The London meeting will allow our leaders to mark 70 years since NATO was founded. As you know, 2014 was the tipping point because of Russia’s annexation of Crimea and aggressive actions in eastern Ukraine”, Ildem told attendees, adding that NATO had, therefore, changed its focus again on defence and deterrence.

He said that NATO had suspended practical cooperation with Russia since 2014, but that the dialogue had not been interrupted. In addition to deterrence and defense policy, another component of NATO’s relations with Russia is the dialogue in which NATO is in contact at the ambassador level. Ildem said the goal of such talks is to increase transparency and reduce risks, therefore these talks are sometimes difficult.

Ildem also referred to the growing cooperation with the European Union in areas such as terrorism or hybrid threats. He stressed that cooperation is necessary to create synergies which would improve the work of both organizations.

One of the topics of the meeting will be building defense capacity and increasing the military budget to 2%. He stressed that remarkable progress had been made in this regard, although the work is not complete.

When it comes to budgeting, Anthony H. Cordesman, Arleigh A. Burke Chari in Center for Strategic and International Studies (CSIS), believes that this type of budgeting is “idiotic” and that the question of 2% is destructive itself, leading to more divisions than to contributions.

“If we focus on those arbitrary financing methods, we will have a stupid reporting system”, said Cordesman and added that Russia alone spends somewhere between $61 billion and $63 billion, while the U.S. spends nearly $650 billion.

Cordesman pointed to the fact that there is no country in Europe that spends more than 4% of GDP for defense because it is unnecessary.

“Together NATO spends almost 15 times more than Russia, but we cannot rely on the structures we had before. The problem is that they are not spending the funds the right way”, said Cordesman, adding that there is too much of the emphasis on equipment rather than on forces themselves or broader infrastructure.

Maciej Popowski, EU Deputy Director General for Neighborhood Policy and Negotiations and Enlargement, noted that many overlook the fact that NATO and the EU share about 80% of members.

“I think what we started to collaborate together a lot more. We have joint briefings and meetings. We have joint exercises. We are also cooperating on coordinated capacity building in members”, said Popovski.

He also pointed out that the European Union is preparing for the launch of the European Defense Fund in 2020, and stressed that this represents a huge change, as the first time the European Commission is investing big money in defense.

“We have this Strategy for the Western Balkans, which has a clear dimension of security. The Western Balkans are very close to the European Union, and we need to invest in its peace and security, explained Popovski, adding that he believes the EU and NATO can do much more in the future when it comes to hybrid threats.

On the other hand, the views of Michael Carpenter, Senior Director of the Penn Biden Center for Diplomacy and Global Engagement, suggest that NATO is in crisis.

“I will not name anyone, but I think it is quite clear that we have certain NATO members who have fallen back when it comes to common values. This practically undermines solidarity among all member states, making solidarity in crisis situations less secure”, said Carpenter.

According to him, it is true that NATO has troops in the Baltic States, but the question is whether it has adequate arms and equipment, or whether troops in Poland are adequately deployed.

“The key question is whether we will succeed in maintaining geopolitical cohesion. Some countries have opted to purchase weapons from Russia. There will have to be serious talks about whether we are on the same page”, concludes Carpenter and adds that if NATO wants to attract countries like Serbia in the future, then it must work on the values it offers.

IPAP’s activities are in line with Serbia’s interests

The panel “Serbia and NATO – From Balkan Baroque to Serbia’s Enlightenment” was addressed by General Milan Mojsilović, Chief of the General Staff of the Serbian Armed Forces. At the beginning of his address, he said that participation in the Partnership for Peace (PfP) program is an optimal measure of Serbia-NATO relations.

“With the adoption of IPAP, a higher framework of cooperation with NATO has been established in line with Serbia’s interests. Therefore, I believe that what this program offers really fulfils the interests of Serbia”, said Mojsilović.

He believes that choosing the area of cooperation in the PfP program is like a buffet which sometimes is a better thing then membership, because NATO is the one that offers the areas of cooperation, and it is up to the partner to choose the theme, framework and mechanisms. Mojsilović adds that so far over 7500 field activities have been completed, but also not everything has gone smoothly, as there have been many obstacles that have been overcome in the meantime.

On the other hand, Mojsilović expressed concern about the emergence of “new security players” on the field.

Robert Pszczel, Senior Officer for Russia and the Western Balkans at the Public Diplomacy Division (PDD), shares Mojsilović’s stance about Serbia-NATO cooperation, adding that the political will is very important in all of this.

“It is true that the NATO apparatus is not as big as many think it is, but on the other hand, all countries need to reconcile their positions, and this partnership with Serbia has the support of all member states”, Pszczel explains.

“The totality of this document covers those non-military aspects. They are indeed numerous because it is also about standards and policies, commitments that NATO and countries assume”, concludes”, concludes Pszczel.

Branimir Filipović, Acting Assistant Foreign Minister for Security Policy in Serbian Ministry of Foreign Affairs, also spoke on the panel and stressed that security has no price and that it is indivisible.

“We must all come together to make the region and the whole of Europe prosperous and stable because stability is a prerequisite for economic progress and progress of every other kind”, said Filipović.

He believes that since Serbia and NATO have a common goal of maintaining peace and security, then it is imperative that this common goal is achieved.

“IPAP and our overall partnership with NATO are steadily growing in accordance with our military neutrality policy, and through practical programs and, above all, we are trying our best to advance mutual understanding and trust through truly intensive dialogue at all levels”, he concluded.

The 7th Belgrade NATO Week takes place from 12 to 14 November 2019 at the Palace of Serbia, bringing together numerous representatives of the authorities, NATO, the European Union, academia and non-governmental organizations.

Ildem: NATO supports the efforts for dialogue between Belgrade and Pristina