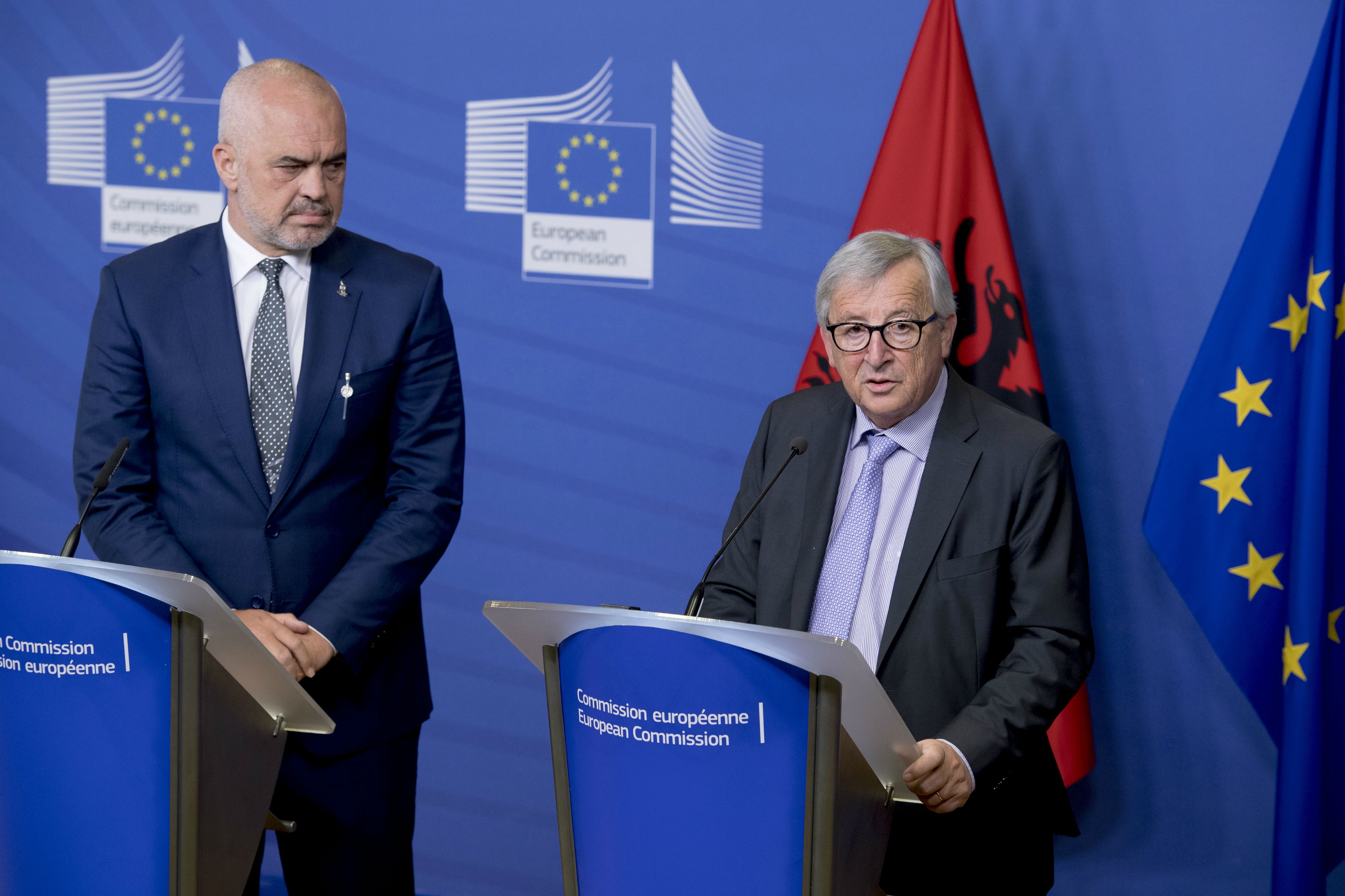 The biggest judicial reform since the fall of communism, a good example for the rest of the Western Balkan states that are in the process of the European integration and fearless fight against the corruption and organized crime – that is how the experts and the European diplomats have been referring to the judicial reform that started in Albania in 2014. This reform has aimed to secure the independence of the judges and prosecutors and cut the ties that judicial system has had with politics and criminal groups. Five years later, little has remained of the tremendous announcements and huge, maybe even unrealistic, expectations that Albania could conduct such huge reform in a short period of time.

In fact, the long-lasting process has been stuck in the middle, judicial system has been paralyzed and corruption and organized crime have been flourishing over the past few years.

In the meantime huge concern over the judicial reform has been raised in Brussels, by France and the Netherlands in particular, firmly standing against the opening the accession negotiations with Albania due to the difficulties with corruption and organized crime. Not only has Albania been blocked on the EU path, some of the member states are also questioning the already existing benefits, such as the visa free regime.

On the other hand, European Commission continues to assess the process positively.

“Good progress was made, through the further determined implementation of far-reaching justice reforms (which included the establishment of the institutions for the self-governance of the judiciary) and the continuation of tangible results in the vetting process. The re-evaluation of all judges and prosecutors has advanced steadily and delivered substantial results”, it is stated in the Commission 2019 Report on Albania.

Official institutions of Albania are also highlighting the advances in this field.

“Today the Albanian Parliament has elected two new members of the Constitutional Court. We welcome this decision and we look forward to having a functional Court in place as soon as possible. The implementation of justice reform continues and is essential for Albania on its EU integration path”, EU Delegation in Albania tweeted this week.

Nevertheless, despite praises coming from Brussels, the situation in the field is not so bright. Process is going slow and ties between criminal structures and judiciary look firmer that was expected.

Judicial system has been paralysed and the pending cases are being piling up. For instance, Exit portal has published statistics for 2018 which shows the backlog of 28.863 cases which has been more than doubled in comparison to 2015.

Re-evaluation of the judges and prosecutors

Being granted the candidate states in 2014, Albania introduced constitutional reforms to open the judicial reform process. The main aim of such changes has been to strengthen the judicial system’s independence, to increase the system’s effectiveness and the public trust in justice. The goal has been planned to be achieved through a two-faced process – re-evaluation of the existing judges and introducing and establishing the new self-governing judicial and anti-corruption institutions.

All judges and prosecutors have been vetted in three main aspects: the re-evaluation of assets, a background and integrity check to discover the links to organized crime and a qualification assessment. The process has been led by the newly established Independent Qualification Commission (IQC) and the Appeal Commission.

Being evaluated on the basis of these three criteria, judges and prosecutors have to prove that they are not only qualified for the position they are currently holding, but also that in the past they did not have any connections to the criminal groups, organised crime or suspicious actions that led to acquiring any tangible or intangible benefit.

“So far, more than a hundred judges and prosecutors in Albania have resigned from office, and the number of resignations only expected to increase in the very near future. To this regard, the resignation of personnel must be viewed as an indicator that must oblige criminal prosecution bodies to investigate their past actions related to their assets and connections with organized crime”, warns Sulstarova.

She adds, however, that there are no criminal proceedings against the judges or prosecutors that have not passed the evaluation process so far.

“They are dismissed from working in the justice system for a period of 15 years. The evaluation bodies of the vetting process are not entitled to file a criminal proceeding for any of the subjects foreseen by the law. Nevertheless, the independent institutions such as the High Inspectorate of Declaration and Audit of Assets and Conflicts of Interest (HIDAACI) and the General Directorate for the Prevention of Money Laundering (GDPML), that provide support with data the vetting evaluation bodies, can initiate a criminal proceeding if the subjects to the vetting law failed to pass on the grounds of unjustified assets or abuse of office”, explains Sulstarova further.

It is important to note that investigative media such as BIRN Albania, also pointed out that large number of judges cannot justify their assets. In the period between 2004 and 2014, according to the research, 80 per cent of the appeal courts’ judges could not prove their assets in at least one year. BIRN also proved that 25 judges of the appeal courts in Tirana had a value of assets higher than 5 million euros, which is way above their monthly income.

However, despite the fact that almost the half of the judges have been dismissed in the process and the data provided by investigative journalists, due to the lack of the consequences in terms of filing criminal charges for those who have been proved as ineligible to keep their posts, the concern remains whether the process will bring the real change remain very high. Accompanied by the long-lasting procedures and a lot of delays, vetting process has betrayed high exceptions from the very beginning.

The vetting process is foreseen to be completed in 2021. However, according to the Sulstarova, at the current pace, the vetting institutions will actually need another eight years to end the process. Furthermore, the whole reform has been overseen by the International Monitoring Mechanism that is under the aegis of the European Commission. This Mechanism has been introduced in the Constitutional Annexes, adopted in 2016, but it also raises certain level of concern, due to the very unclear position and the role this institution will have once the revaluation process ends.

“The new institutions for the self-governing of the judiciary, the High Judicial Council, the High Prosecutorial Council and the Justice Appointment Council have been established, representing a crucial step in strengthening of the independence and accountability of the judiciary”, this year’s EU Commission Report assessed.

Besides these institutions, there are also newly introduced ones aiming to address the fight against corruption and organised crime, such as National Bureau of Investigation (NBI) that is an independent structure responsible for the investigation of criminal offences in the criminal jurisdiction of the Special Prosecution Office.

“The NBI is a part of the Special Anti-Corruption Structure (SPAK) together with the Special Prosecutor Office responsible to investigate and prosecute acts of corruption and other crimes related to it. As an independent investigative body, NBI will serve as a contact point with the investigative authorities of other nations regarding crimes of corruption”, explains Rovena Sulstarova, adding that the establishment of those institutions is currently ongoing.

However, political dispute between the ruling and opposition parties and the boycott of the parliament, accompanied by the overall unstable political conditions in Albania and complex bureaucratic procedures that the government had to carry out for the offices, budget and staffing of the new institutions, have hampered the implementation process and paralyzed the judicial system.

The public opinion polls have shown that the trust of the public in the judiciary is very low. A public opinion poll conducted in 2017 has shown that 73.4 per cent of the interviewed citizens in Albania believed that judicial system does not protect their rights, and the percentage is even larger for those who actually had experience with the system.

Even though the reform and the constitutional changes have aimed to redefine the judiciary and the prosecution system, stop the rampant corruption in the field of justice, and break the bonds of judges and prosecutors with politics and crime, due to the delays and incapacity of the whole political system to carry the change, it is not viable that the public trust in judicial system due to the vetting process will significantly improve in the near future.

For the time being, vetting process has brought hope and troubles to Albania and its citizens. Whether the hope will triumph over the troubles in order to carry on this long and painful reform, especially in the context of recent decision of European Council not to open accession talks, one of the main reasons why the reform was started in the first place, is currently hard to see.

Vučić and Thaçi inform Macron about the state of the dialogue