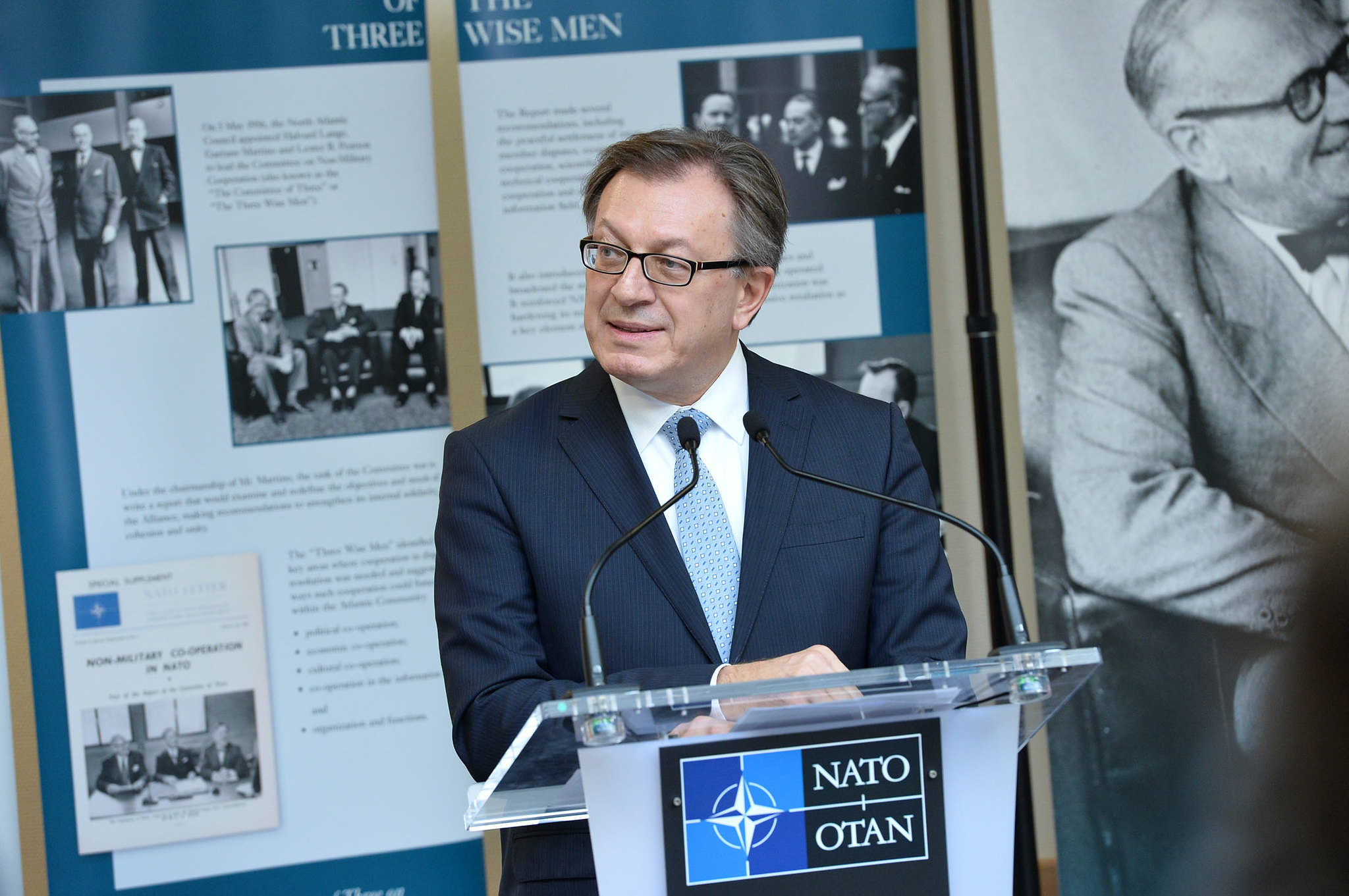 We had the opportunity to interview Tacan Ildem, NATO Assistant Secretary General for Public Diplomacy at the 7th Belgrade NATO Week, about NATO’s role in the Balkans today, its challenges, its relationship to Kosovo and Bosnia and Herzegovina’s potential membership, and its relations with Serbia.

European Western Balkans: Recently, Serbia adopted a new Individual Partnership Action Plan (IPAP) with NATO. How satisfied are you with Serbia’s fulfilment of the previous IPAP, especially in the area of public diplomacy

I am very gratified to see that public diplomacy is one focus area of IPAP. We always confront ourselves with the challenges of disinformation – propaganda. Not a single country is immune to being confronted with this. But put aside this issue, it is also something important to inform our public regarding how our cooperation is developing because there is a certain lack of knowledge in the minds of people. Especially the young generations who don’t know much about security and defence issues. It is valid for Allied countries, but I am sure a similar thing is valid for Serbia. Therefore, as one of the focus topics of IPAP, we could be able to convey the truth, the facts relating to our partnership. It would be useful to eliminate some of the stereotype ideas. Some of the myths surrounding our cooperation. To show that we at NATO respect the military neutrality policy, the foreign security policy orientation of Serbia and we are in no way in a place to impose upon others (including Serbia) what they should do or what they should not do. It is the sovereign decision and preference of each individual country. So, these myths can only be eliminated through better communicating what our cooperation stands for.

EWB: This year marks the 20th anniversary of NATO’s bombing of Serbia. This event is deeply etched in the memory of Serbian citizens and is the main reason why NATO has low support among the population. What efforts does NATO make to change the opinion of Serbian citizens, because as long as there is low population support, very few politicians in Serbia will openly support deeper cooperation with NATO?

TI: I know that NATO is a controversial topic in the minds of the Serbian public. It is understandable given that the 1999 events are fresh in the memories. And I recognize the tragic consequences on the lives of innocent people. At the same time, we have to remember that NATO did not conduct this operation against Serbian people. It has to be put in the wider context of trying to protect the loss of civilian people. So, we regret the loss of lives on both sides of the conflict and especially those who were affected by losing their loved ones. We show sympathy to them. The Secretary General [Jens Stoltenberg] already expressed his condolences to those who lost their lives on both sides of the conflict. And today during the meeting of Belgrade NATO Week, I had the opportunity to personally add my voice by expression of heartfelt condolences.

I think that it is always important to remember history. History is something that we can’t forget and we should not forget, but we should find ways to move on and not only focus on it. We are living today and we should be looking at the future and tomorrow.

You mentioned IPAP, it is a good way to see that positive things are happening. After all, Western Balkans are full of not only with members of NATO but also with partners of NATO, it needs to be in a secure and stable environment, increasing their prosperity. Citizens of this region should enjoy good neighbourly relations, interaction and economic development. Then, of course, it would be a value added to European security in general and NATO sees this a very important process. We should really focus on the positive side and I think that IPAP is a long-term vision about the cooperation of NATO and Serbia.

EWB: Fake news is one of the challenges faced by NATO. This is true especially in countries like Serbia where NATO public support is very low and media tends to report about NATO in a negative context. How does NATO counter this phenomenon?

TI: Well, it is true that disinformation and propaganda have become an important phenomenon. Usually it is part of more complex, sophisticated, hybrid activities. For that, NATO is trying to make its contribution to raising awareness. Our citizens should know about it and when it comes to Serbia, a frontline country in that respect, people should always double-check what they are exposed to as facts, but they may not, in fact, correspond to reality – the truth.

Another important thing is to have media literacy in countries who could be able to double-check the source and accuracy of the information that is in hand. And we have extra challenges nowadays with the usage of the internet and social media platforms. This requires extra vigilance. So, awareness is very important, but also for civil society organisations to be able to track the information space to understand how the hostile narrative is shaping. Everything boils down to strengthening of societal resilience in resisting such challenges like disinformation and propaganda.

We are doing quite good work at NATO. We are also having the lessons learned from allied and partner countries. We share best practices, not only among ourselves but also with the European Union. After all, those challenges affect many countries on the globe and not a single country is immune to the effects of disinformation and propaganda.

EWB: Recently, French President Macron stated that “NATO’s brain is dead”. What consequences can these statements have for the Alliance and what message is being sent to the Western Balkan countries, especially North Macedonia, which is about to become a new member?

TI: Well, I cannot comment on a statement or interview given by a head of state of an important allied country. Nevertheless, when we look at the past history of NATO, it has proven to be the most successful alliance in human history. And when we look at different faces of its adaptation, we see that each time it came out of a very difficult discussion stronger, united and always keeping cohesion and solidarity among Allies.

We are an alliance of 29 democratic nations. Soon the number would be 30 with the accession of Republic of North Macedonia. In the past, Allies had very difficult discussions on critical questions like the Suez Channel crisis in 1956. Then we had the departure of France from the integrated military structure. There were some hard discussions during the Iraqi war. So, such debates are necessary. Tough discussions are needed among Allies. But, we know that they have the ability to reach a consensual decision at the end of these difficult debates, which makes those decisions to be implemented even stronger than without having such a difficult discussion.

So, I don’t think that President Macron is saying NATO is no longer valuable. Recent statements that he made on the contrary talk about the importance of NATO, but perhaps with certain issues to be addressed. But, I can assure you when the leaders gather in London on 4 December, they should be able to come out with a strong statement of unity. Testifying to the successful achievements of the past seven decades, but also provide to our public their vision for the future. Because we are very much focused on how the security environment is shaping, what NATO can contribute to that and how these transnational challenges could properly be addressed knowing the destructive technologies, big data, artificial intelligence. All of these provide challenges to all Allied countries, but also opportunities. Innovation is very much in the heart of the work of NATO, so they would also give the future-oriented vision of NATO.

TI: First of all, as Secretary General Stoltenberg made remarks in the past. It is sovereign decision and it is 29 nations and I’ve been told that it would soon be 30 nations who are members of NATO to reach on this potential accession of any given aspirant countries.

We know the particularity of each case that you refer to. First and foremost, NATO supports the EU-sponsored Belgrade-Pristina dialogue and we hope that it will soon resume. We want these talks to produce results. And for Bosnia and Herzegovina, it is a valued partner of NATO. They are making contributions in different ways to security. They are also in the process of delivering their domestic reform agenda, so our partnership could also support their expectations in that respect. With all these elements in mind, the foreign ministers offered the possibility to Bosnia and Herzegovina to present Annual National Programme (ANP) and it is up to Bosnia and Herzegovina authorities whether they seize this opportunity or not. But it is the opportunity offered to them and we’ll see how this would be pursued in the period ahead of us.

EC Non-Paper for Montenegro: The country has to work on media freedom