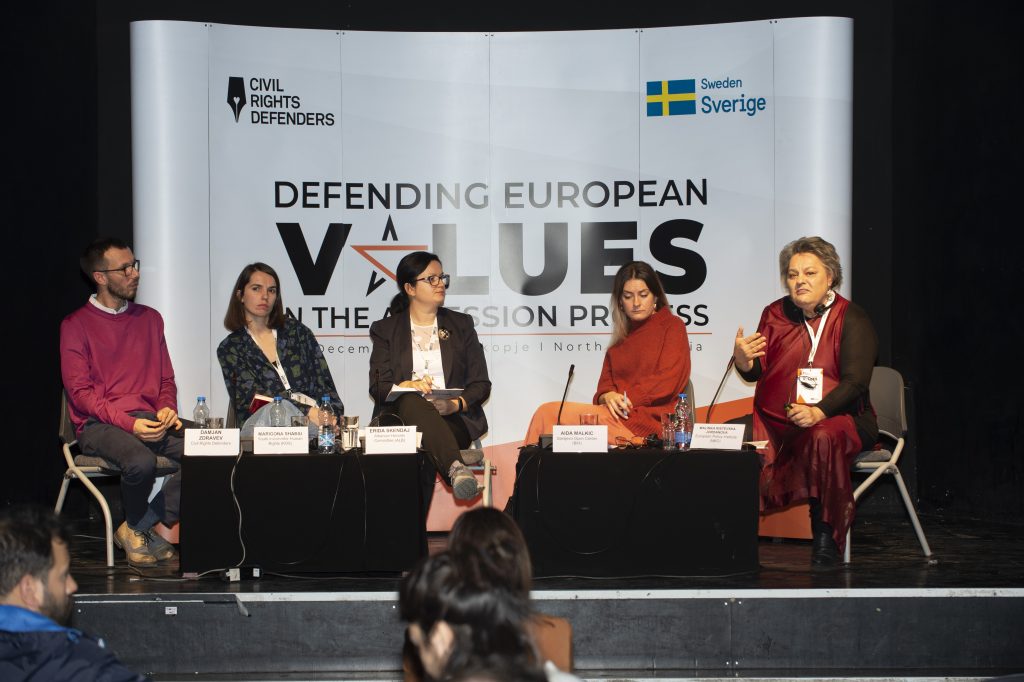 SKOPJE – In the atmosphere in which the pressure the civil society through both state-funded media and institutions prolongs, regional solidarity and joint work are crucial for achieving positive change and the rule of law in the Western Balkans.

This was one of the key conclusions of the civil society forum “Defending European Values in the Accession Process”, held on December 2-3 in Skopje, organized by Civil Rights Defenders (CRD). The forum brought together around a hundred human rights defenders from the Western Balkans, Turkey, and Eastern Europe, as well as key policymakers and representatives of EU member states.

According to the latest Human Rights Defenders in the Western Balkans Report, published on December 2nd, the position of human rights defenders is progressively getting more vulnerable in most Western Balkan countries, despite the recent improvements in legislations.

A panel discussion organized during this event “Human Rights Defenders – Intimidation Instead of Recognition” focused on the position of activists as civil rights defenders the pressures they face in Western Balkans countries. The panel hosted the following guest speakers: Uranija Pirovska from the Macedonian Helsinki Committee, Tamara Milas from the Center for Civic Education (Montenegro), Dragana Pećo from Crime and Corruption Reporting Network (KRIK), Milica Pralica from NGO Sharp Zero based in Banjaluka, Ariana Qosaj Mustafa from Kosovo Institute for Research and Policy Development (KIPRED) and Sidita Zaja, from the Tirana-based NGO Pro LGBT. The discussion was moderated by Ivana Ranđelović from Civil Rights Defenders.

The findings of the latest CRD report indicate that human rights defenders are often constrained when promoting or protecting fundamental rights. “In terms of the freedom of assembly, the authorities use various tactics to dissuade the organizers from holding manifestations. One of them is the latest legal changes, which made it more difficult to obtain permission for public gatherings”, it is stated in the report.

That this is exactly the case in Bosnia and Herzegovina confirmed activist Milica Pralica, working in Banja Luka. The NGO Sharp Zero, where Pralica works, as well as her personally, were targeted during the protests organized in Banja Luka after the death of 21-year-old David Dragičević.

The death of David Dragičević in March 2018 sparked a series of anti-government protests, also known in Republika Srpska, with support gathering also being organized in Belgrade and Zagreb. The case is still under investigation in Bosnia and Herzegovina.

“Republika Srpska functions as a state within a state and it is very difficult to defend civil rights there, or even criticize the government. We practically live in a dictatorship”, said Pralica at the panel, explaining that the situation with civil rights got even worse after the death of David Dragičević. The protests, said Pralica, lead to an escalation of police violence. “When activists, civil and human rights defenders were targeted, it became clear there was no one to protect you in Republika Srpska”, said Pralica, referring to the fact that the President of Republika Srpska Milorad Dodik supported the initiative to ban the protests back in 2018. This resulted in charges being pressed against some of the activists for “organizing unreported public gatherings”.

“Another problem we face is that in Republika Srpska, over the past 10 years, I have met only two lawyers who are ready to take such cases for sums of money that would be abnormal. Legal help is really difficult to find”, said Pralica.

The findings of the CRD report also confirm that the investigation and prosecution against the perpetrators of attacks to HRDs assess the CRD report is slow and inefficient. “While most interlocutors have had a positive experience with the police, they believe that the prosecution is the bottleneck of the system”, quotes the report. According to Pralica, even though activists won a couple of court cases when they were targeted “as foreign mercenaries, terrorists and so on”, activists sometimes have to wait for 5 or 10 years for the court decision.

In countries in Montenegro, which have already started the EU accession negotiations and which have implemented some of the reforms, the situation has not yet improved satisfactorily, assessed Tamara Milas, a Montenegrin activist.

Milas said that during the last seven years since Montenegro started the EU accession negotiations, the situation in the country has improved when it comes to the aspect of the legal framework. However, stressed Milas, the challenges regarding institution-building and implementing newly adopted policies still remain.

“There is a general lack of understanding of the modern concept of human rights, as a less traditional and also the stereotypes continue to be the source of discrimination against women and marginal groups. Moreover, there is no political will to prioritize human rights and to place public interested before party interests”, stressed Milas. She pointed out that activists are seen as political dissidents and therefore, they are being discriminated against.

Sexual and gender identity remain the key grounds for discrimination. Sidita Zaja from the Albanian “Pro LGBT”, whose organization recently did research on hate speech online, particularly against women. “When women are objected to hate speech, they are referred to as a group, but it has to do with honor or lack of moral or her sexual experiences somehow.

Zaja assessed that there is a trend of reinforcing gender stereotypes when it comes to targeting women activists in Albanian media. “There is a focus on women as individuals, while men are targeted for their work and they are generally presented as if they have a more positive role in society than women.

Uranija Pirovska of the Helsinki Committee in North Macedonia, assessed that the human rights defenders in this country face similar challenges. Pirovska added that the media in North Macedonia still support misogyny and homophobia of the former government. “During the Coloured Revolution”, recalled Pirovska, “Men were never referred to by using the sexual connotation or their looks or outfits, while this still happens with women in the Macedonian society. “How dare you to criticize the government, go home and cook – these were the messages I got from the people who were not fighting the same struggle as we did during the Coloured Revolution”, said Pirovska, adding that during her career she was attacked many times, both as a woman and as a human rights activists.

“North Macedonia is still a society where the church and other religious groups have a big impact and they were the collaborators of the former government”, concluded Pirovska.

Meanwhile, agreed the panelists, the civil and human rights defenders have to rely on regional activist networks, like the one that formed spontaneously as citizen gatherings took place across Western Balkans in support to protesters demanding an investigation of the death of David Dragičević. Even though short-lived, this act of regional solidarity with protesters in Banja Luka showed that such networking is not only needed but that it is crucial for efforts to achieve the rule of law in the Western Balkans.

Weber: We are working on visa liberalisation for Kosovo