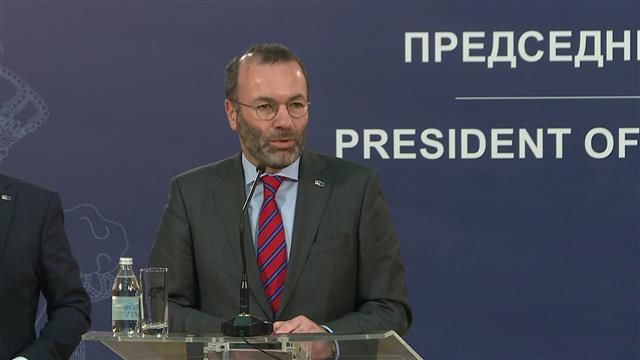 BELGRADE / SKOPJE – Leader of the European People’s Party group in the European Parliament Manfred Weber has met with the representatives of the biggest political parties in Serbia and North Macedonia during his three-day visit to the region.

Following his meeting with the President of Serbia Aleksandar Vučić on Monday, Weber reminded that the new European Commission has begun its mandate and that it is important that EPP shows support to the European perspective of the region in that context.

“My own and our message is that Serbia is a great friend and we will do everything we can to give a credible European perspective to Serbia”, said Weber, who met with the representatives of ruling Serbian Progressive Party, EPP associate member, on Monday and Tuesday.

Weber and EP Rapporteur for Serbia Vladimir Bilčik also met with opposition representatives in Serbia, who informed them that, while they are still open to the dialogue with the European Union, EP mediated talks with the government have not brought results.

Alliance for Serbia (SzS) confirmed that it will boycott 2020 parliamentary elections and said that the government has failed to ensure fair electoral conditions, the main topic of the dialogue mediated by the representatives of the European Parliament.

While visiting North Macedonia on Wednesday, Weber commended the country on its approaching NATO membership.

„On my visit there I witnessed what membership means to them. We should always keep that in mind when talking about European Defence,“ Weber wrote on Twitter.

He said that he believes that the latest decision by the European Council to block the start negotiations talks with Albania and North Macedonia was a historic mistake, damaging the enlargement process, the region and the EU itself.

„As far as my group is concerned, all the governments in the Council have supported the start of negotiations with North Macedonia and Albania, but other political forces have interrupted it and it is a great mistake for us,“ Weber said.