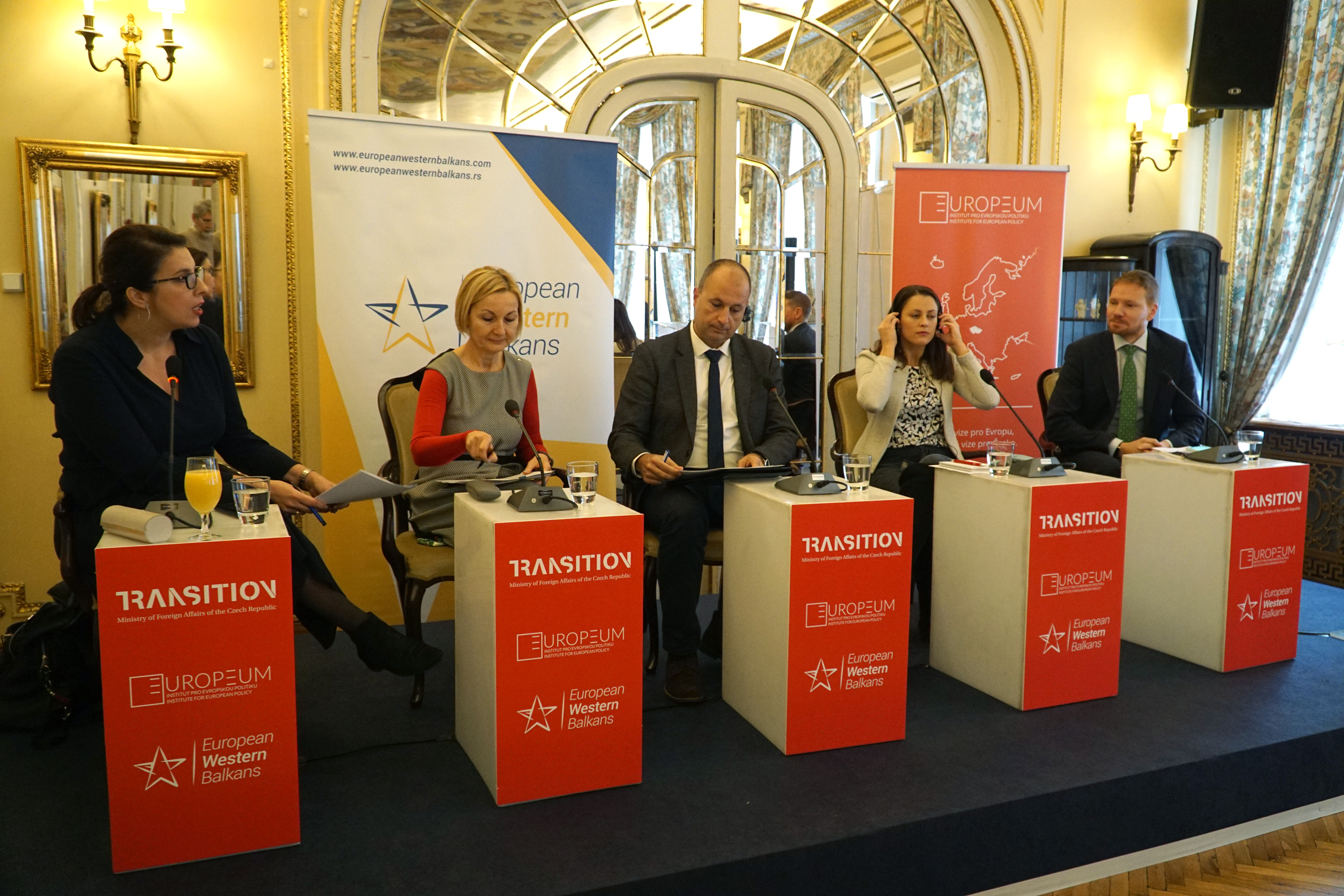 Panel "Chapters 23 and 24: State of Affairs and What Lies Ahead"; Photo: Tanjug / Dragan Kujundžić

BELGRADE – Opening of Chapter 4 with Serbia which took place earlier this week was more of a signal of goodwill to the Western Balkans than a recognition of progress, especially in the Chapter 23, agreed the participants of today’s panel discussion on the state of the Chapters 23 and 24 in Serbia that took in Belgrade.

“The past year was more or less lost when it came to reforms under Chapter 23”, stated Milan Antonijević, Director of the Open Society Foundation in Serbia at the panel organised by Prague-based EUROPEUM Institute for European Policy and European Western Balkans.

He said that, if the only outcome of this year’s reforms is the revision of the Action Plan on the Chapter 23, non-expert citizens will see little progress.

Vice-President of the European Movement in Serbia Vladimir Međak pointed out that Serbia has four chapters ready to be opened at the current time. Opening one of them was the lowest cost for the EU, which wanted to show a guest of good will after not opening the last chapter with Montenegro and accession negotiations with North Macedonia and Albania.

He agreed that the government is doing little to address the areas covered under Chapters 23, which concerns Judiciary and Fundamental Rights, and Chapter 24, which, among other things, covers fight against organised crime.

“There is a “problem in translation” from English to Serbian when government officials and media report on EU’s messages on these areas – rule of law and corruption issues are often translated as Russia and Kosovo”, said Međak.

According to him, it is in the interest of the government to represent geopolitics as the only serious demand and obstacle for Serbia to enter the EU – and the normalisatin of relations with Kosovo is not even the biggest obstacle, it is the rule of law, Međak underlined.

Research Fellow at the EUROPEUM Institute for European Policy Jana Juzova said that it is unfortunately true that the problems with the rule of law exist in some EU countries as well.

“This can be seen in the efforts of the new Commission, which is also pushing for new approaches to enlargement. It wants to ensure that the aspiring members will respect the rules after they enter the Union”, Juzova said.

She also pointed out that opposition to stronger European institutions is rising in EU, and that Western Balkans has been held hostage by these divisions.

That the Chapters 23 and 24 are not only about judiciary and corruption was pointed out by Tanja Ignjatović, Programme Coordinator at the Autonomous Women’s Center.

“There is no space for us who are tackling anti-discrimination policy, everything is taken by the corruption and the judiciary”, she said, illustrating how much of a problem these issues are for Serbia.

“Corruption is in focus every day, and I do not have an impression that we have made progress when it comes to judiciary. The question is whether anyone connects this to the Chapter 23”, Ignjatović said.

She added that, from the position of Autonomous Women’s Center, the indicators of successful reforms are not precise enough.

“We can see whether certain laws have been adopted or not, but that does not mean that anything is actually achieved”, she said.

“There was more enthusiasm for the EU in the Czech Republic”

Juzova also reflected on the state of support for the EU in Serbia, saying that there was more enthusiasm in Czech Republic in the years leading up to its membership. She also recognized that the state of the media and civil society is different in the two countries.

She assessed that the parallel negotiations of various policy areas under the new non-paper proposed by nine EU members is encouraging.

“What is very discouraging with French veto and later the proposal is that dissatisfaction with Serbia and Montenegro is projected on North Macedonia and Albania – and the former country has achieved a lot in the past two years”, said Juzova.

Međak agreed that the current methodology of accession negotiations is not working, but also pointed out that the initiatives for its reform are a sign that there is still political will for enlargement in the EU.

He added that the French non-paper on enlargement reform and the non-paper released by nine EU members combined have good proposals, excluding splitting negotiations in different stages.