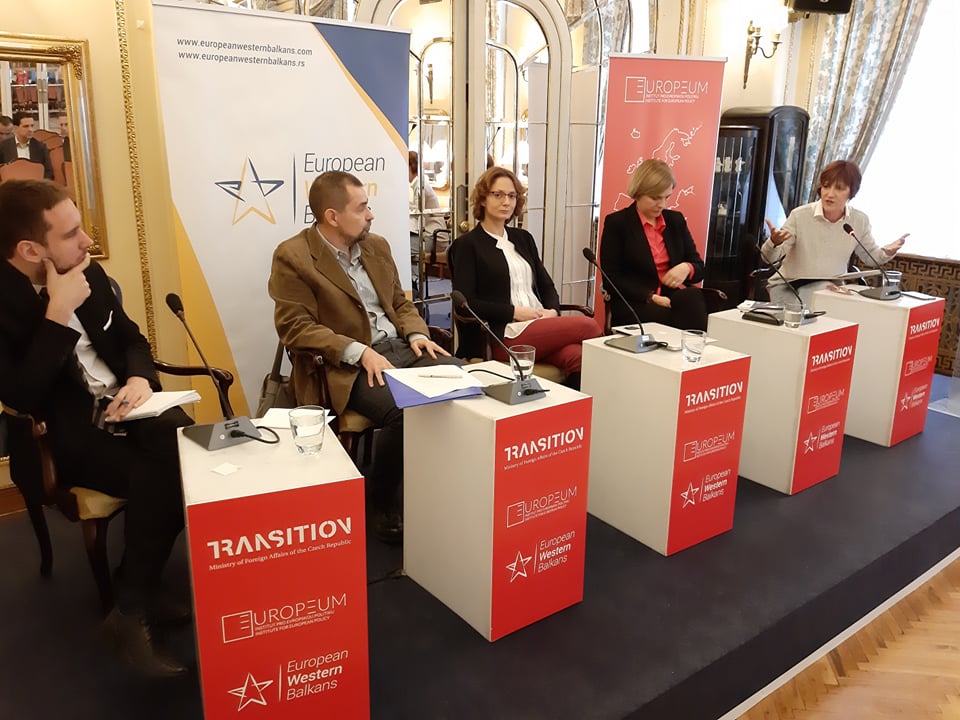 Participants of the panel "Challenges in Reporting: How to Tell a Good Story about Chapters 23 and 24"; Photo: EWB

BELGRADE – Only media with limited reach allow journalists to do their job professionally, while the media with national coverage ignore many problems related to EU accession reforms in Serbia.

This was the conclusion of the panel “Challenges in Reporting: How to tell a good story about Chapters 23 and 24”, organised by Prague-based EUROPEUM Institute and European Western Balkans in Belgrade today.

The journalists participating in the discussion said that there is no lack of topics in the context of the negotiating Chapter 23, which tackles corruption and the rule of law.

Describing multiple violations of human rights, including attacks on independent media, journalist Danica Vučenić stated that “we are living in a mirror of the Chapter 23”, but that the majority of citizens are not informed about these topics, because they are getting informed by the media with national coverage, which are pressured by the government.

“There are journalists in the national media that understand the connection between human rights and European integration. But they are not doing their job”, stressed Vučenić.

Former author and host of Evronet, a programme on the public broadcaster RTS covering EU integrations from 2005 to 2014, Maja Divac agreed that there are many potentially great stories arising from Serbia’s obligations under these negotiating chapters, which should be made from the point of view of ordinary citizens, because the reforms directly influence their lives.

“My impression is that there has never been less reporting on the reforms and EU integration, in the media which are available to the widest population”, said Divac.

She added that, since the change of government in 2012, people in institutions have become more and more unwilling to communicate with the media.

Editor of Rule of Law section at Danas daily Aleksandar Roknić agreed that the human approach is the best one when reporting on these topics. He said that Danas’s articles on the rule of law are well read online, and the headlines are focused on corruption and legal challenges faced by the ordinary people.

He assessed that the lack of concrete messages on the benefits of EU when it comes to rule of law is intentional.

“This government is anti-European. They are not sharing the values, only the European funds”, he said.

Editor at the Centre for Investigative Journalism of Serbia (CINS) Milica Šarić stated that, even though CINS does not have European integration process in its focus, the topics they are covering are framed by the Chapters 23 and 24 due to the high level of problems Serbia has in this area.

Šarić claimed that while stories published by CINS do not find their way to the national frequency television stations and most mainstream media, these media usually publish government responses to accusations found within the stories.

“If there were no other independent media, probably nobody would find out about these stories”, said Šarić.