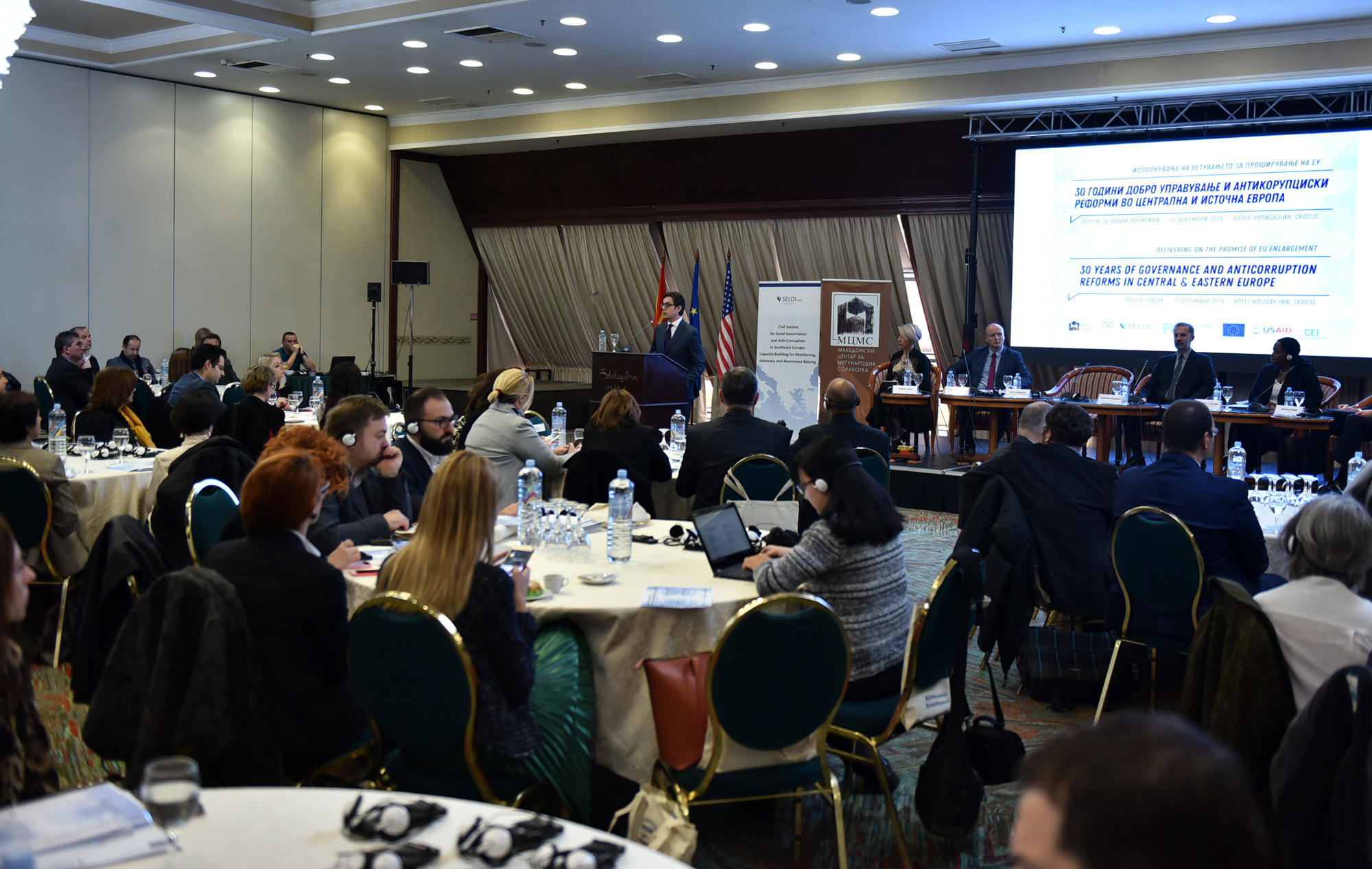 SKOPJE – Members of the Southeast Initiative for Development and Integrity (SELDI) attended the Policy Forum “Delivering on the Promise of EU Enlargement: 30 Years of Governance and Anticorruption Reforms in Central and Eastern Europe” which was organized by the Macedonian Center for International Cooperation (MCIC) and Center for Study of Democracy (CSD) from Bulgaria in Skopje.

Corruption is a security threat

Keynote speaker, Stevo Pendarovski, President of the North Macedonia, stated that high corruption in the country in last 15 years has become a security threat.

“We need systematic approach in dealing with corruption and establishing new value system, we must do this not only to satisfy the pre-condition of EU but also to regain the trust of the citizens. That is why I call all stakeholders, government and CSOs, to cooperate”, he added.

Radmila Šekerinska, Minster of Defence of North Macedonia, pointed out that good governance and well functioning judiciary could reduce corruption and spoke about the success of the Macedonian government regarding the achieved improvements in transparency and accountability.

“In the past 2 years we opened all budget spending data and improved media freedom. However, further progress could be achieved in partnership with the civil society” she pointed out.

Jennifer R. Littlejohn, Chargé D’ Affaires, U.S. Embassy in North Macedonia, praised the reforms that have been undertaken in North Macedonia, especially freedom of media, public financial management and transparency, but stated that there are problems that persist.

She pointed out that “acceptance of petty corruption in everyday life endanger countries’ security and undermines the trust in the system and also disincentivising investors”. Littlejohn sent the message that everyone – civil society, media, business owners needs to speak up about the corruption.

Aligning legislation with EU aquis and establishing anti-corruption institution is not enough – there is also a need for shift in mentality, participants heard from Freek Janmaat, Head Operations, European Delegation in North Macedonia. He expressed support to the SELDI initiative stated that EU welcomes initiatives aligned with EU priorities.

Dr. Slagana Taseva from Transparency International North Macedonia said that although laws and institutions had been put in place, the results are still missing. She highlighted that North Macedonia is lagging in numerous areas in comparison to the region of Western Balkans.

“Macedonian high school students had the worst performances on the test in the region, and NMK is at the bottom of the standard of living behind Serbia and Kosovo – this relates to the systematic corruption”, said Taseva.

She asked for a bigger commitment from all stakeholders and called all the parties participating on next elections to show programs on how they will deal with corruption.

Fight against corruption does not end with accession to EU

Since the establishment of the SELDI network in 2001, there have been ups and downs, but the overall conclusion is that enlargement achieved significant results, said Ruslan Stefanov, Director of the Economic program at CSD.

“Corruption Monitor System (CMS) results shows that corruption pressure in Western Balkans is half less than in 2001, but still higher than in Bulgaria and Romania in 2007. Since 2016, only North Macedonia and Albania have marginal progressed in decreasing corruption”, said Stefanov.

On the session dedicated to Corruption and State Capture in the Western Balkans, Dr Aleksandar Gerganov, Senior Analyst at CSD, stated that the good news are that people in North Macedonia, Serbia, Albania and Montenegro had become more resilient to the corruption and a lot of problems still exists.

“Corruption pressure in the region is still high and has increased since 2016 in four out of six Western Balkans countries. Hidden employment also remains high and is on the rise in five of the six countries” he said.

Gerganov also added that the EU needs to continue monitoring progress in anti-corruption and to engage directly with civil society in the region. Brussels needs to re-enforce its focus on anti-corruption with more political assertiveness.

Speaking specifically about the CMS results for North Macedonia, Emina Nuredinoska, Head of Civil Society Department at MCIC, stated that situation with corruption has improved but other problems have replaced corruption as primary concerns of the citizens.

“Unemployment, low incomes and political instability are more problematic than corruption according to the people”, she explained.

She also said that pressure and involvement in corruption decreases in 2019 compared to 2018.

Ruslan Stefanov from CSD said that special attention should be paid to the link corruption and economic development.

“Investments from Russia and China could be problematic, if they are not contributing to the welfare of the people. We do not need millions that go in a few companies and then are transferred offshore companies, but we need investments that stay in the country” he explained.

He also added that signing exclusive agreements with foreign investors is not good and that the governments should not hurry to sign this kind of contracts just because countries need investments or votes.

Participants have also discussed the situation in judiciary reform in Western Balkans.

Natasha Gaber Damjanovska, Director, Academy for judges and public prosecutors, said that is very important to the make further research in the motivation of people for corruption and to research the origin of corruption. She also said that new generations of judges and prosecutors in North Macedonia will be employed in 2 years.

“Human capital is very important. That is why Academy for judges and public prosecutors is preparing 2 years training for 60 people who will be ready for employment. They need appropriate language skills and they will pass integrity and psychological tests under EU standards”, she added.

Today in Montenegro, courts are more efficient in protection of rights and there is faster access to justice, what was recognized by the EU partners, said Veljko Rutović, Special Prosecutor from Montenegro.

In Serbia, judge Predrag Kolaković from Judge’s Association of Serbia, there is a problem with the proposed amendments of Constitution that gives de facto more power to the National Assembly when in comes to the composition of the High Judicial Council. Kolaković also mentioned that large number of judges feel that they work under pressure.

“According to the recent research 44% of judges said they felt pressure in they work and 43% of the judges feel that they are under systematic atmosphere of pressure” said Kolaković.

On the panel Fostering Political Will and Technical Capacity for Tackling Corruption: Achievements in Legislative and Institutional Framework, Biljana Ivanovska, President of the State Commission For Prevention of Corruption in North Macedonia, said that there is new Law on State Commission for Prevention of Corruption, in line with international standards (GRECO recommendations, PRIBE report) which has expanded investigative functions of the Commission in terms of financial interest and political complaining but there are persisting challenges.

„Now we lack financial and human resources for our work. We work with more competences with same capacities. We had numerous memorandum of cooperation in order to enable our work easier in many areas“, she explained.

In Serbia, there are numerous problems regarding the fight against corruption, and frequent changes of the laws is just one of them, it was pointed out by the Miroslav Milićević, Vice-president of the Anti-corruption Council of Serbia.

He also stressed the fact that Serbia has decreased position in Rule of Law index measured by the World Justice Project and that there is a lack of independence of judiciary and the frequent bypassing the law on public procurement by the Government.

„In fight against corruption we need greater involvement of media and investigative journalists“, he concluded.

Blerim Kelmendi from Anti-Corruption Agency from Kosovo, said that Kosovo has laws needed for fight against corruption such as Law on Confiscation of Assets, Law Protection of Whistleblowers, Law on Prosecutor Council and that Special police office for combating corruption will be created soon.

“The greatest problem is in the implementation of the laws. Instead of implementing the law, they are changing the laws” he explained.

Grigore Florin Popescu, chief military prosecutor of the Service for investigating corruption offences committed by military personnel, National Anti-Corruption Directorate (DNA) from Romania, has presented the work of DNA and it’s organizational structure and said that on numerous occasion politicians wanted to change Penal Code in Romania in order to exclude themselves from the prosecution.

“Political influence should not meddle in the functioning of the rule of law”, he said.

“The big problem is that only fraction of recommendation is implemented in order to reduce such irregularities “said Hasanbelliu and expressed his hope that Albania will soon get Anti-corruption Agency.

In Bosnia and Herzegovina, it seems there is no lack of institutions but results in fight against corruption.

Mevludin Džindo, Assistant Director of the Agency for Prevention of Corruption and

Coordination in Fight against Corruption of Bosnia and Herzegovina said that there are 13 bodies for prevention of corruption, 12 prosecution offices, 16 enforcement agencies and 52 courts in BiH.

“We need to make bridges between institutions with also need national strategy for fight against corruption in next 5 years, appropriate funding and human resources”, Džindo said.

For the end of the day, on the last panel dedicated to the Civil Society Against Corruption, Dario Jovanović, Director of Pod Lupom – Coalition for Free and Fair Elections from Bosnia and Herzegovina, show the results of the research „How to steal elections“  based on documented cases and evidences from field on elections fraud.

As the tools and mechanism used to „steal“ election in BiH politicians use open threats to voters, abuse of state resources, abuses of personal data, abuse of rules on polling stations, abuse  of voters lists and small bribes. He also stressed that the corruption in BiH is still widespread.

„In BiH there is corruption on every step, people do not recognize it because it became a way of living“ he explained.

The participants also appealed to the EU to continue monitoring the progress in anti-corruption and engage directly with civil society in the region.