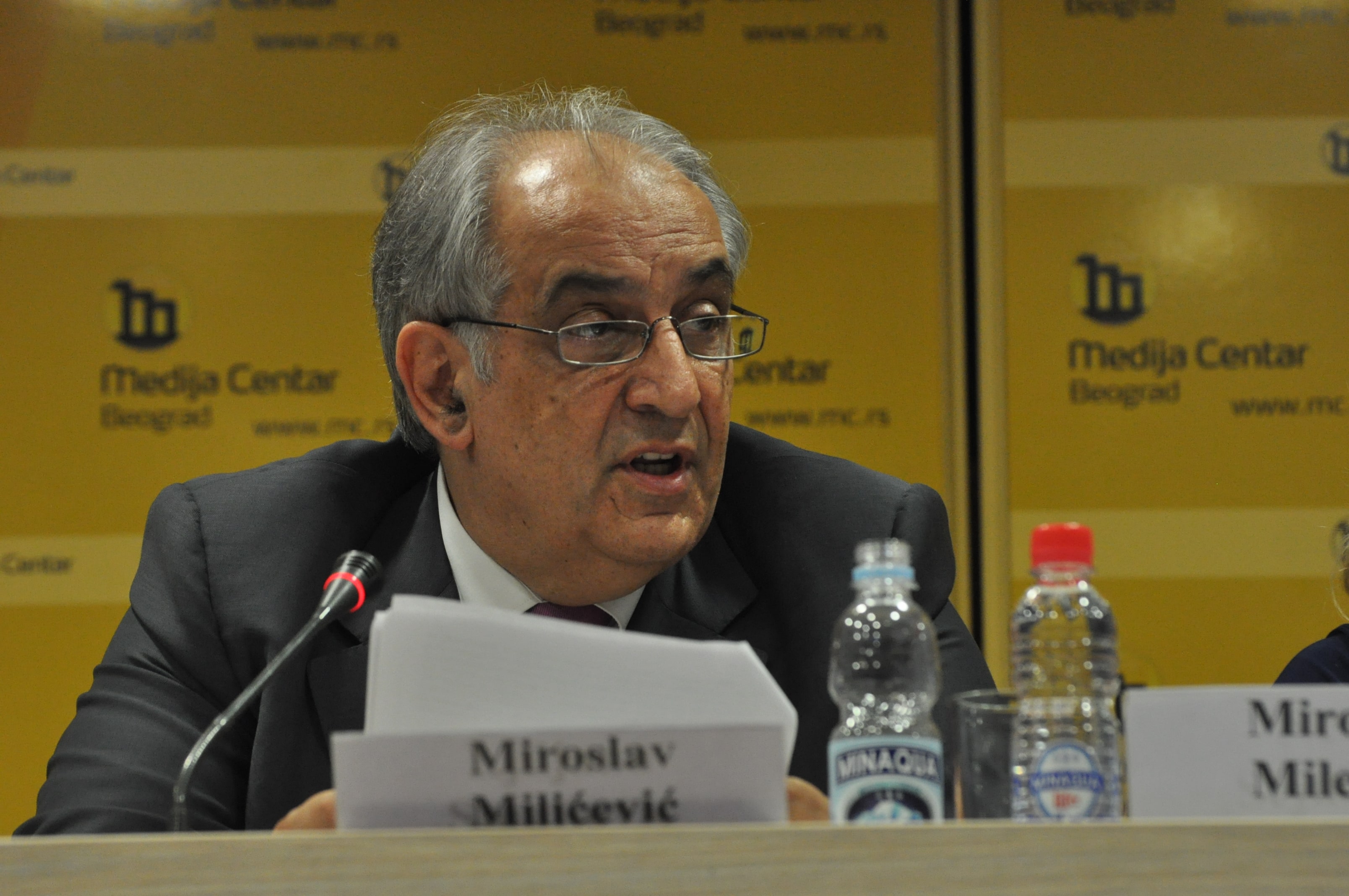 Citizens of Serbia marked the Anti-Corruption Day on 9 December this year with numerous unresolved affairs, among which the most prominent is the arms trade affair involving the “Krušik” factory in Valjevo. This was the context of our interview with the Vice President of the Anti-Corruption Council of the Government of the Republic of Serbia, Mr Miroslav Milićević, who spoke for EWB about the Council’s work, relations with the incumbent and previous governments and current trends and topics in the area of the fight against corruption.

European Western Balkans: The Anti-Corruption Council is an expert body established by the Government of the Republic of Serbia. However, the results of its work do not appear to have the necessary reverberation in public. Does the Government sufficiently listen to the advice of the Council and how do you assess relations with the current Government of Serbia?

Miroslav Milićević: After the establishment of the Anti-Corruption Council in 2001, the first potential corruption threat was privatization. The Council had begun to address this “high-voltage” corruption when the question of what communication between the Government and the Council might be arose.

No Government has never ever had good communication with us, we were not favored in any government because we felt that the people with the greatest powers have the greatest responsibility to fight corruption.

So far, the Council has written more than 60 reports on key issues in the country. When we prepare a report and submit it to the Government, we give them a 10 days “grace period”, to indicate to us the inaccuracies in the report, or to invite us to present our views, which has happened once in the last 10 years. I do not know why the Government does not want to communicate with its Council. We are not unmistakable and we are always ready to discuss our reports. Our reports are based on public information, never on unchecked facts. If what we are writing indicates potential corruption based on official data, then this is something to be discussed.

EWB: After the grace period, if the Government had no objection, Council publishes report a report?

MM: Yes. The Council had previously published reports at press conferences, but we stopped because journalists who wanted to impede the conference and not allow others to ask questions started to come, so we now rely on our website.

EWB: The Anti-Corruption Council currently has 7 of the 13 members and such a situation exists since 2017. Have you submitted nominations of the members for appointment to these posts to the Government? How does the rump composition of the Council reflect on its work?

MM: The Council has been nominating distinguished people to the Government for years. I understand that the Government has the right not to elect members on our proposal, it is not a tragedy, but what we are encountering is silence. I am currently the Vice President of the Council, and by statute I have all the rights of the President of the Council. Since the death of former President Verica Barać (in 2011), I have not wanted the President to be elected in the rump composition, because I do not consider it morally correct. Two members, not nominated by the Council, were elected by the government, which is not in line with rules on appointing members of the Council.

EWB: Where do you see the greatest problem with the anti-corruption system? Is it the prevention of corruption, repression of corruption, the work of the prosecution and the judiciary, or is it a problem on the political level?

EWB: Corruption Perceptions Index of the Transparency International points to the third year of decline – from 72nd place in 2016 to 87th place in 2018, with Freedom House showing similar declining trends. I have noticed that you often speak publicly and warn about research by international bodies, but politicians seem to be addressing them rarely. Do you think that decision makers take research from notable organizations seriously and work to improve our country’s ranking?

MM: The hardest part about the fight against corruption is monitoring the success of this fight. In such a situation, we have to use the same criteria used by everyone else in the world. We cannot say that Freedom House does not know what is happening in Serbia or that the World Justice Project does not know if there is a rule of law or not. If this is true in other countries, then it should apply to us. The problem is that we constantly think that something special is happening to us, that someone has not understood or noticed something well. If someone tells you the same thing five times, you need to think about what to do.

EWB: The National Anti-Corruption Strategy and Action Plan have expired in 2018, and most of the activities in the Action Plan for its implementation remained unfulfilled. What is the problem? Are we setting goals too ambitiously, do we not have objective capacity to meet, or is there something else at stake ?

MM: In the fight against corruption, the percentages mean nothing, you either managed to reach some degree of rule of law or you put the effort that did not produce the expected result. The basic problem is that in some things you may be too ambitious, so some solutions cannot be achieved within the existing constitutional framework, but on the other hand you have the situation that something that could be done is not, or that there is poor coordination between the stakeholders. Ultimately, we spend too much time preparing these documents. However, even when documents are prepared well, if the institutions are not functioning at full capacity, documents remain just a piece of paper.

MM: The Anti-Corruption Council does not deal with individual corruption, although we are open to receiving information from the citizens and sending them to competent institutions. Systemic corruption is the one that was made by the design of the system. Our biggest problem in the fight against corruption and prosecution of corruption from the past is that there were various regulations and other solutions that enabled corrupt practices that did not benefit the wider community.

Regarding the „Krušik“ affair, I personally do not like to speak about the cases in process. But what the Council is saying is that it is quite irrelevant whether or not someone is an whistle-blower, because according to our laws, if one detects corruption by working in one of the state-owned  companies, he or she is obliged to report corruption. If this is not true, then the question arises why Mr Obradović is in house arrest, because false information cannot be a business secret.

The second question is what are business secrets, because that is the level of secrets that is declared only by the company and there is a great potential for corruption. In the case of public-private partnerships, the Government will be protecting the foreign partner even though it has majority share of capital and needs to remain silent about the matter, but then the state takes responsibility for what is happening in that company.

EWB: In 2015, the Council produced a report on ownership structure and control of media outlining certain systemic problems. Four years later, in what direction is the media situation moving?

MM: The media situation has started to worsen since the 2008/2009. Today, the trend is the same, the direction of worsening is the same, and the media is one of the main obstacles in the effective fight against corruption. This is the case because various different stories are launched at the same time, and all of which cannot be true.

In 2008/2009, we have signaled that there were changes in the media sphere, and in 2011 we made the first media report in which we made it clear that the ownership change, non-transparent privatization of the media, situation in which we don’t known who would be the owners of the media, will all have a major impact on the way the media works.

Since then, our access to the media has been shrinking, and we have not been able to reach the public. From the beginning, we have asked every director of Radio Television Serbia (RTS) to give as space to communicate with the citizens at any time, no matter who was power. This is not allowed to the Council. We also produced another report in 2014, where we showed that the situation is becoming alarming because even more media, and I mean primarily national media, are coming under the control of new owners, who do not understand the essence of the media but see it as their platforms for expansion their information. At the time, we pointed out that their financial operations were not transparent and that something very damaging has been occurring – that is censorship and self-censorship of journalists. We believe that self-censorship of journalists is not a psychic but an existential category, because young people in this profession are trying to survive.

As the media scene deteriorated, we published a new report in 2015, where we showed that there are subtle mechanisms by which funds from public companies, from public revenues, are channeled to journalists and media owners, so that medias in which quality of work is not main criterion for success, prevail. In such a situation, we cannot communicate with the public and only work through our site and through several newspapers and one television.

What we have also noticed in these reports is the phenomenon of tabloidization of serious media. Tabloids in the fight against corruption are dangerous because they can without any responsibility smear anyone who is not suitable to the government. In such a situation, people started to be afraid to speak up because suddenly things are dug up and the ones who report with the best intentions are actually taunted.

EWB: Large infrastructure projects in Serbia are often implemented through so-called lex specialis, which bypasses public procurement law, which damages the transparency of spending public funds and opens the space for illicit influence. Is the Council planning to address this issue, and can there be any elements of high corruption?

MM: The Council also addressed this topic. We produced a report on non-transparent contracting, where we pointed out that, when it comes to public funds, nothing can be kept secret. When it comes to infrastructure projects and subsidies, it can be a secret how many gears the car has, but it can’t be a secret how much the state has invested in a factory and what it gets out of it. We are saying that the public procurement system must be respected, but it requires another level of control, namely whether the procurement has been carried out, but also the purpose of the procurement, which is very little observed.

This interview was published as part of the project “Civil society for good governance and anti-corruption in southeast Europe: Capacity building for monitoring, advocacy and awareness raising (SELDI)” funded by the European Union