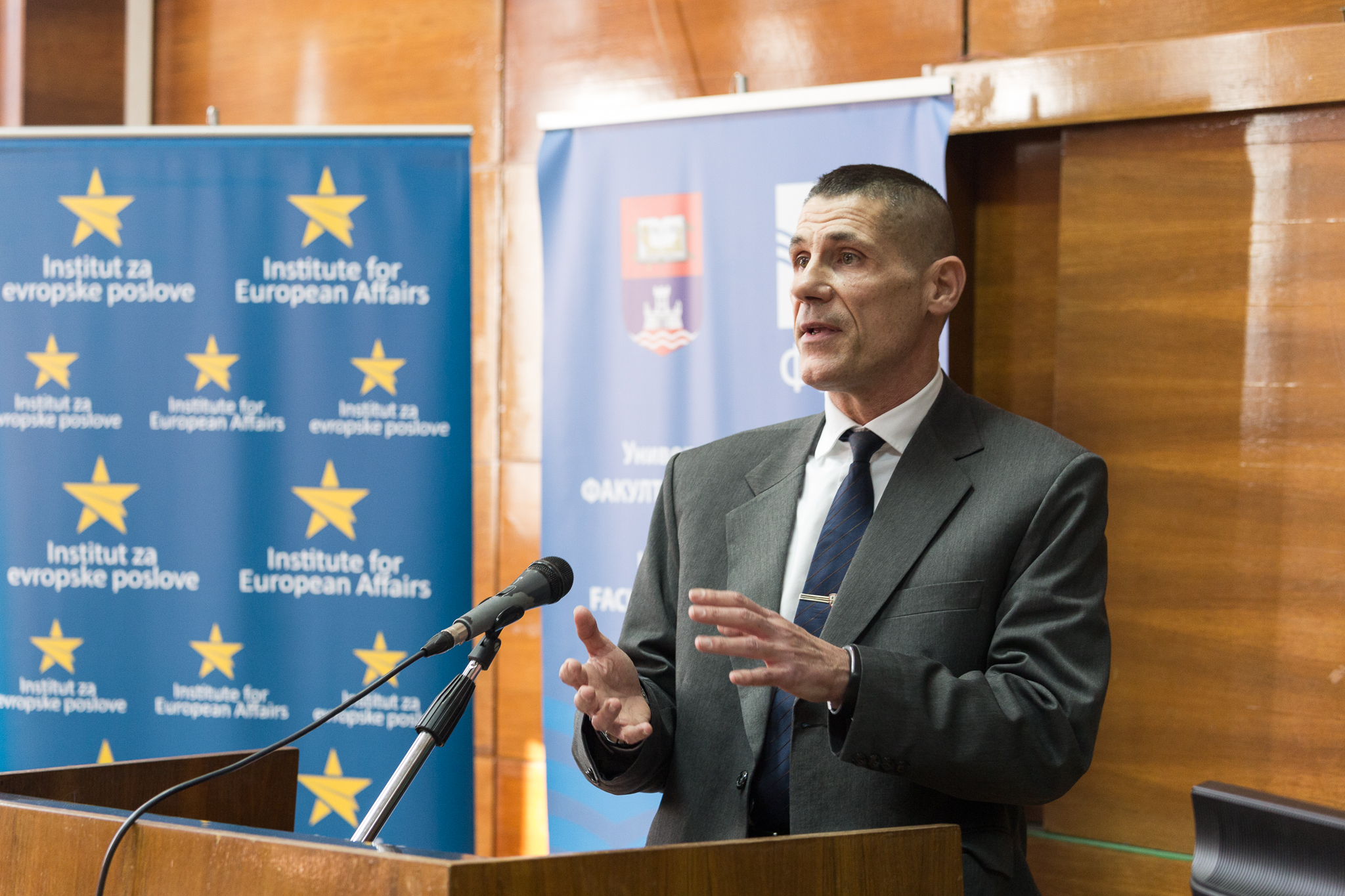 Serbia is becoming an increasingly important partner to NATO, said, Brigadier General Cesare Marinelli, Chief of NATO Military Liaison Office in Belgrade, in an interview for our portal. We had the opportunity to speak about the cooperation between NATO and Serbia, key events that have shaped it in 2019, as well as new Individual Partnership Action Plan (IPAP), which was adopted last month.

Brigadier General Cesare Marinelli: This is my fourth year in Belgrade and I am pleased to say that relations between Serbia and NATO are better than they seem to the average person, with Serbia becoming an even more important partner to NATO. Our partnership is strong and we continue to work together in areas where both Serbia and NATO see the benefits. I am glad that we can cooperate and exchange experiences through the Partnership for Peace programme, with Serbia being among more active countries, focused on training and capacity-building opportunities. We wish to build up a unique relationship and Serbia is free to choose its own priorities for cooperation with NATO.

Currently, in line with its own needs and ambition, and of course its foreign policy, Serbia can choose from over 1,600 different activities to do together with NATO. Serbia and NATO have developed a strong practical partnership over the years. This partnership is based on an understanding that we are neighbours, and working together with our neighbours on security issues, makes all our citizens safer.

EWB: In your opinion, what are the key points in 2019 that marked Serbia – NATO cooperation, either in a positive or negative way?

CM: I will remember the year 2019 for a number of joint activities, beneficial for both NATO and Serbia. Belgrade also welcomed a number of high-ranking NATO officials, proving its commitment to our partnership. Just several weeks ago in Bujanovac, NATO experts were thrilled with the knowledge and capabilities presented by the general-purpose engineering company of the Serbian Armed Forces, which has shown that it is fully prepared to participate in international peacekeeping missions in line with NATO standards.

This is yet another clear sign that the Serbian Armed Forces are continuing to strengthen their training programs in cooperation with us. Moreover, thanks to the NATO Support and Procurement Agency and its Trust Fund, new capacities have been added to the Technical Overhaul Facility in Kragujevac, making both its workers and surroundings significantly safer. Serbia is still free to choose from over 1,600 different activities to do together with NATO, and during this year it has opted for a number of trainings of its capable and devoted officers.

During the course of this year,  several NATO high level officials, including  NATO’s Supreme Allied Commander Europe (SACEUR), General Tod D. Wolters, the Chairman of the NATO Military Committee, Air Chief Marshal Sir Stuart Peach, the Allied Joint Force Command Naples Commander, Admiral James Foggo, Ambassador Tacan Ildem, NATO’s Assistant Secretary General for Public Diplomacy – as well as a number of other NATO officials and experts – visited Serbia to engage in dialogue and discussion with President Vucic and other representatives of the Serbian leadership on a range of topics, such as NATO-Serbia partnership and regional security.

EWB: The new Individual Partnership Action Plan (IPAP) for the period 2019–2021 was adopted by the Serbian Government at the beginning of November 2019. Which elements of the previous IPAP 2015–2018 do you consider to have been fulfilled the most and which the least?

CM: I must say we are satisfied with the effects of the previous IPAP. Now, with the new IPAP, we underline the importance of this document, since it provides us with a very good guidance as to how to take this partnership and cooperation forward so that it can benefit and meet the expectations of both Serbia and NATO. At the same time, we are very gratified to see that public diplomacy is one focus area of IPAP.

We are always faced with the challenges posed by disinformation. Not a single country is immune from that, but I am confident that we can continue our efforts to explain to the Serbian public the principles and the facts that underpin NATO-Serbia partnership. We already have a long-standing cooperation developed these past years with many Serbian interlocutors, including journalists, academics, opinion formers, military officers and members of parliament, just to name a few. We can thus build upon this solid foundation.

EWB: Could the commitment of Serbia to “extend and enhance cooperation with the Collective Security Treaty Organization”, in addition to enhancing political dialogue and practical cooperation with NATO, as stated in the proposal of the Defence Strategy adopted by the Government of the Republic of Serbia, become an obstacle for future Serbia-NATO relations?

CM: NATO sees no obstacles for our mutually beneficial cooperation. We have been constantly emphasizing that NATO fully respects the Serbian stated policy of military neutrality. It is the sovereign prerogative of Serbia to choose whatever security arrangements it finds suitable for the need of its citizens. There is no conflict between having good relations with NATO and good relations with Russia or any other country or a multinational entity. Our partnerships are demand-driven. We do not impose anything on our partners and as you know, NATO works closely with numerous militarily neutral countries, such as Finland, Austria or Sweden, just to name a few.

EWB: Serbia and the Russian Federation conducted a military exercise “Slavic Shield 2019” in October 2019. During this exercise, Russia has deployed to Serbia two anti-aircraft systems – “S-400”, which was deployed abroad for the first time, and the “Pantsir S1” system. How do you see the deployment of these highly sophisticated weapons to Serbia for the purpose of the exercise, and can this affect the future relations of Serbia and NATO?

CM: NATO’s position has always been very clear – the choice of weaponry system is a national sovereign prerogative and this of course includes Serbia. I would like to stress once again, we fully respect Serbia’s and every other nation’s sovereign right to choose their own political and security arrangements. We welcome the current level of our partnership, as we find it beneficial for both sides and we look forward to opportunities for strengthening it further. As you may know, Serbia benefits from a number of different programs offered through our partnership – from scientific cooperation to training of Serbian armed forces for UN-led operations, to reforms of the national defence and security structures, to preparedness in dealing with natural emergencies.

EWB: In the interview for The Economist magazine, President of France Emmanuel Macron stated that NATO is “brain-dead”, which resonated not only in Europe but also in the Western Balkans. What message does this send to the Western Balkan countries regarding the future role of NATO and possible enlargement of NATO?

CM: NATO is committed, as it has always been, to the Western Balkans. We see the region’s future in Euro-Atlantic cooperation and integration for those who want it. This benefits their citizens, their countries and the entire Euro-Atlantic family. This has not changed. We are determined to help the countries of the region to implement real reforms, regardless of their membership aspirations. We respect their choice, whatever it is, whether it is the choice of Serbia to remain militarily neutral or the choice of North Macedonia to join the Alliance. Newest NATO members in the Western Balkans prove that our enlargement has been a clear success story, because it contributes to stability in the region and in the wider euro-atlantic area.

EWB: In Serbia, there is still a negative perception of NATO, mostly as a consequence of the 1999 bombing and NATO’s role in the wars in former Yugoslavia, but also because of pro-government media reporting. How do you see the media coverage of NATO in Serbia and do you think the Government is doing enough to change the negative perception?

CM: We realize that NATO remains controversial in Serbia. The memories of the air campaign in 1999 are still painful for many, especially for those who lost their loved ones. The campaign was never against the Serbian people. It was to protect civilians in the wider region. Each innocent life lost was a tragedy, which we deeply regret. The NATO Secretary General offered his condolences to the families and to all those who lost loved ones on both sides of the conflict.

We must never forget the past, but we can move beyond it and that is what NATO and Serbia are doing with our partnership, looking towards a better future. From my personal perspective, we have developed a productive and very professional cooperation with various journalists and many outlets in the country. NATO is a transparent organization and we highly value the right of the media and the public to know the truth and receive relevant and factual information. Therefore, NATO’s and my office doors are always open. Throughout these past years and during the current one we have had the pleasure of hosting dozens of Serbian journalists and members of parliament in our premises in Belgrade and at NATO Headquarters in Brussels; several of them have interviewed high level NATO officials, including NATO Secretary General Jens Stoltenberg. NATO is always ready to answer any question and we shall continue to do so in the years to come.