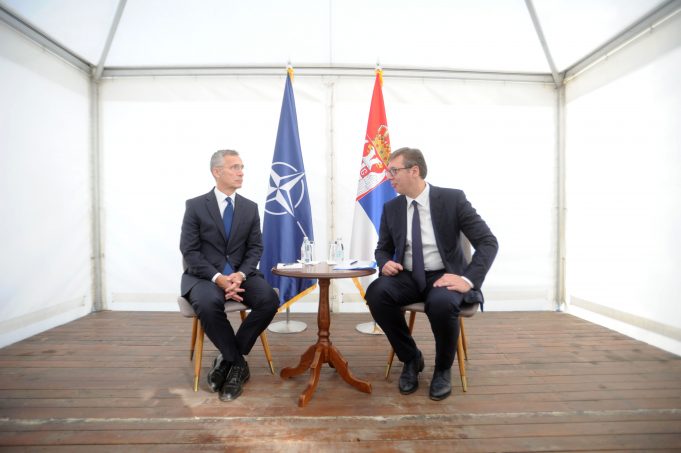 Sometimes it is better not to change anything – this is an attitude shared by almost all parties in Serbia when it comes to relations with NATO. Twenty years after the bombing, Serbia is officially a military-neutral country and a member of the Partnership for Peace, through which it cooperates with the Alliance in various fields. There is no significant political actor at the horizon that would change the status quo in either direction.

The ruling Serbian Progressive Party (SNS) and the Socialist Party of Serbia (SPS) have also been in the governments that adopted the first and the second and current Individual Partnership Action Plan (IPAP), which outlines cooperation with NATO in areas that are jointly defined. This is the final step these parties are willing to take – it is evident from their manifestos and, of course, in the numerous statements by their leaders, which emphasize that Serbia has no aspiration for membership.

On the other hand, although the opposition assembled in the Alliance for Serbia coalition wants to present itself as a polar opposite to SNS and SPS, the Alliance’s policy towards NATO is almost a perfect mirror-image of the government. On its website, centre-left Democratic Party states that it supports the fulfillment of the commitments made in the Partnership for Peace and the pursuit of military cooperation with EU and NATO members, while the newly founded Freedom and Justice Party maintains the position of military neutrality. Despite the fact that its leader has been labeled several times as the “NATO Vuk” in pro-government tabloid newspaper, the centre-right People’s Party stands on a position of military neutrality as well, which it believes should be inserted into the Constitution.

Still, the SzS is not a completely pure reflection of the policies of the ruling parties. The right-wing Dveri, apart from decisively emphasizing “no to NATO”, propose closer cooperation with the Collective Security Treaty Organization (CSTO), centered around Russia. Another Russophile party, which still has several percentages in the opinion polls, is the extreme right Serbian Radical Party, whose manifesto goes a step further – it wants admission to the CSTO and the formation of Russian military bases on the territory of Serbia.

On the other side of the spectrum are the parties that have been recognized by the public as supporters of NATO accession, but have not been registered by public opinion polls for some time – the Liberal Democratic Party and the Serbian Renewal Movement. The Party of Modern Serbia also sees NATO membership as a medium-term goal, which it confirms for the EWB, while the Free Citizens Movement says for our portal that it supports current forms of cooperation but has not yet formed an attitude towards membership, and stresses that the issue is currently not on the agenda.

Status quo – an easy position for the parties

Looking at the recent election results and opinion polls, it can be seen that parties that advocate anything but the current form of relations with NATO are far from receiving significant support from the citizens. Assistant Professor at the Faculty of Political Science in Belgrade, Dušan Spasojević, believes that the politics has not changed substantially since 2000, and that there is a “mainstream” that gathers almost all political actors.

“It is a policy that involves cooperation with NATO as one of the most important players in the region, and, on the other hand, the awareness that public opinion in Serbia is not inclined towards membership or that there is some strong external pressure for Serbia to become a NATO member. It is a relatively comfortable space where you can meet some of the requirements from outside without coming into conflict with voters”, Spasojević tells EWB.

He does not expect that things will change in the foreseeable future, nor that any party will emerge that would significantly influence the abandonment of the current direction.

“The only thing that can fundamentally change the process is European integration or the pressures that will go along the lines of foreign policy towards Russia, where a sort of further rapprochement with NATO would emerge. But it will not be something that is a fundamental change”, Spasojević emphasizes.

Marko Savković, Programme Director of the Belgrade Fund for Political Excellence, also does not see a party in Serbia with a significant electorate, both in government and in the opposition, which would stand for NATO membership. He reminds that, as the years go by, for various reasons, NATO is becoming less and less popular in Serbia, while the number of those who would vote for membership in a future referendum is declining.

“Military neutrality – and this is a thesis I often repeat – has become a widely accepted policy in Serbia even though it began as a necessity rather than choice. This does not change as the governments come and go. Ten years of affirmation of neutrality, which has been presented in a positive context, has done its job. The international circumstances, such as multi-polarity, re-opening of the issue of Kosovo and foreign policy “successes” of Russia have also contributed to this”, Savković says for EWB.

Consequently, he concludes that he does not expect a turn to membership advocacy positions among the parties in the future.

NATO is not a very significant issue for the voters

Although the party manifestos present relatively clear positions on the relationship with NATO, many of these documents, especially those of the ruling parties, have been published several years and election cycles ago, and political actors almost never criticize or praise what the Government is doing on this issue. The biggest politicization of the issue remains a single protest in Belgrade organized by a small right-wing movement as a reaction to the adoption of the first IPAP in 2016.

This could be another factor that contributes to the fact that the policy that favours the status quo has been dominant for almost two decades.

“In essence, since the parties are not very keen on discussing the issue, we cannot say that NATO is of paramount importance. It is more of an issue that is sometimes used to reinforce certain types of identities, especially with radical right-wing parties who are explicitly against membership, but it is also a peripheral thing”, he explains.

According to Spasojević, one of the images that parties often use when it comes to talking about NATO can be seen every year on 24 March, when they talk about it as the organisation that carried out an aggression on Serbia. But then, the relations are ironed out and compounded by some other messages.

One example of such a relationship could have been seen this year, when, at the commemoration of the 20th anniversary of the bombing, President Vučić said in an emotional speech that crimes against Serb civilians will not be forgotten and criticized then-spokesman for the Alliance, Jamie Shea. Later in the year, a new IPAP was adopted and some important visits for cooperation between Serbia and NATO took place, including that of NATO Commander NATO Joint Force in Naples, James Foggo.

“In that sense, NATO is an important issue, but it is not of paramount importance, it is more a part of some other narratives”, concluded Spasojević.

Policy towards NATO in Serbia seems to be set in stone and crossing party lines, especially since the adoption of the Drafts of new Strategies on National Security and Defence, which support its continuation. The expected entry of North Macedonia into the Alliance has not lead to any changes in Serbia’s attitude, and it seems that the only thing that could really carry things in another direction is a significant change in the opinion of the citizens. This is something that is still hard to see happening.

How will enlargement reform affect Serbia and Montenegro?